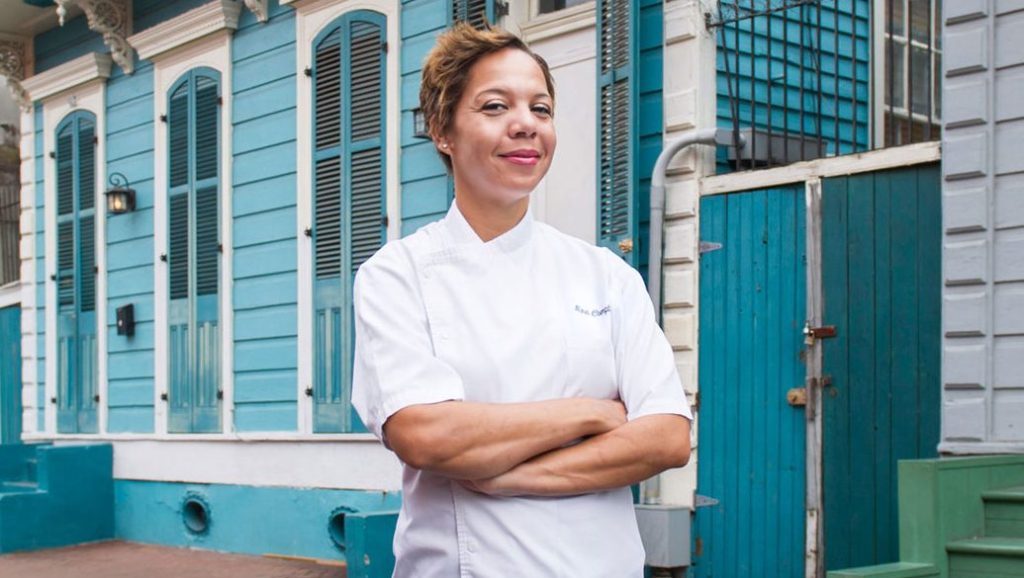 Eating out in New Orleans can often feel like choosing between a suit and tie or a T-shirt and Mardi Gras beads. Chef Nina Compton’s James Beard Award–nominated Compère Lapin falls squarely into the former category. But her newest restaurant, Bywater American Bistro—opening today—is intended to live somewhere in the middle.

“I want to give people very, very tasty food where they can come three, four times a week and have a good time,” Compton says. “We don’t need to be pretentious.”

Located within a 2,600-square-foot former rice mill, Bywater American Bistro has the bones of an industrial space, with exposed brick walls, wooden columns, and lofty high ceilings. But the feel is simultaneously communal and convivial, with banquet seating covered in turquoise hues and a completely open kitchen surrounded with counter seating. Eating here can feel like stepping into a lively dinner party at a chef’s private home—and for good reason: Compton lives upstairs.

The restaurant is Compton’s second, a project with Larry Miller, her business partner and husband, and Levi Raines, a former sous chef at Compère Lapin. Before his stint at Compère Lapin, which is known for its unique Caribbean-inspired Louisiana fare, Raines was working at Andrew Carmellini’s Miami outpost of The Dutch.

“Levi is a shining star, and I think he’s really going to be put on the map here, in terms of chefs to watch,” says Compton, who was named one of Food & Wine magazine’s “Best New Chefs 2017.”

While Compton could have just opened another location of her Tchoupitoulas Street institution—she admits a Compère Lapin would be successful uptown—she decided to launch a completely new concept.

“I didn’t want to become stagnant,” the Saint Lucia–born chef says. “I didn’t want to get pigeonholed into cooking goat all the time. Diners here are open-minded, and I think they want to try different things, not just creole or Cajun food.”

In terms of cuisine, Bywater American Bistro will focus on American—as in all of the immigrant influences that define the national conversation. The food will be just as technique-driven as the menu at Compère Lapin but will be more approachable for regular weeknight dinners.

The menu focuses on seasonal dishes spiced with international ingredients such as habanero peppers and turmeric. Look for plenty of rice and grains (a nod to the building’s history) like farro risotto with Maitake mushrooms and minted breadcrumbs and crab-fat rice with green apple and filé. There are also house-made pastas such as spaghetti pomodoro and smoked ricotta agnolotti with sunchokes.

Appetizers include pickled shrimp with celery, rye croutons, and trout roe served atop buttermilk dressing, and tuna toast—a play on the traditional Spanish pan con tomate—with tuna bresaola, garlic, tomato, and avocado mousse. There is also an extensive French-inspired charcuterie menu, which Compton says is hard to find elsewhere in the city, featuring options such as foie torchon, country pâté, and oxtail presse.

Entrées include seafood such as yellowfin tuna steak with pepperonata, soft herb salad, and almond cream, as well as rabbit curry (a tribute to Compère Lapin’s namesake storybook character) with cilantro, pecans, and jasmine rice. Vegetable sides include options such as roasted cabbage with navy beans and basil gremolata. Finish the meal with warm rice pudding with dulce de leche or Nutella flan with crystalized hazelnuts.

The cocktail program will feature straightforward classics such as bottled negronis and martini service, which will offer elegant garnishes such as charred, pickled onion petals. It’s the kind of meal you’d want to eat three, four nights a week.

Bywater American Bistro is a groundbreaker in the up-and-coming neighborhood, which some would describe as New Orleans’ next Williamsburg. “We wanted to bring something special, something new, something unique, and something fresh to the area,” Compton says. “Hopefully other restaurants will follow suit.”