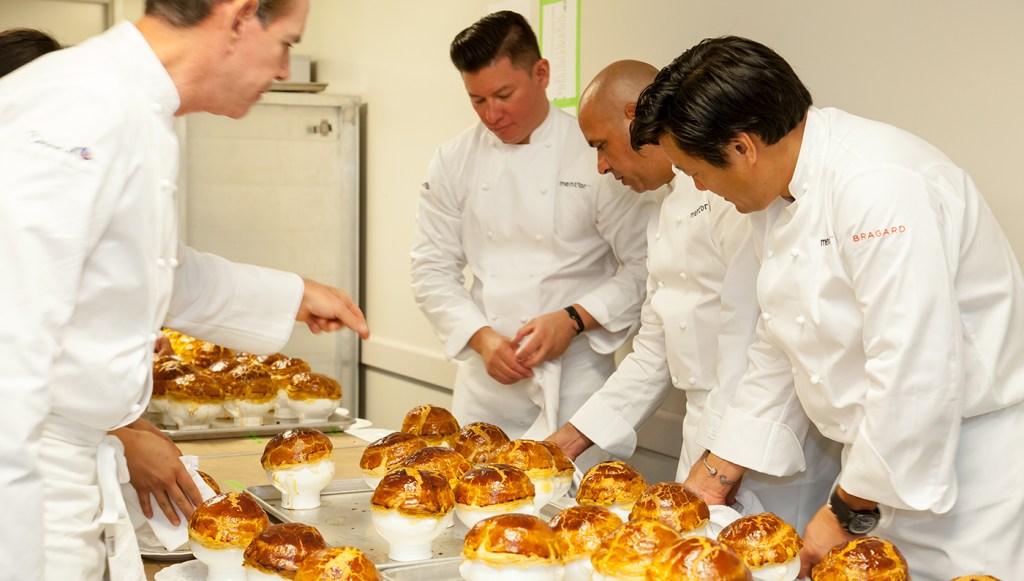 It’s not every day that Thomas Keller, renowned chef and monarch of a culinary empire that includes fine-dining institutions such as Per Se and The French Laundry, is captivated by a food truck. This, however, was no ordinary food truck.

Set on 20,000 acres of scenic South Carolina Lowcountry, the property recently reopened as the sixth Montage resort with a boutique inn designed to resemble the original plantation mansion built by Richard T. Wilson Jr., a wealthy New York banker who was responsible for acquiring and preserving the surrounding 20,000 acres of land in the early 20th century. “I want to live here,” chef and Kentucky native Dean Fearing said shortly after he arrived. “It’s an amazing feel of the South. It’s the moss on the trees; it’s the architecture of the buildings and houses; it’s the quaintness of the neighborhoods. And everybody is so friendly. It is just a delight to be here.”

Keller stood off to the side of the truck’s ordering window, straining to get a glimpse of the grill and workstations inside. “I designed the [truck’s] kitchen to be able to flip any sort of dining option,” says Nathan Beriau, Montage Palmetto Bluff’s executive chef. “The kitchen is a blank canvas and outfitted with everything you can think of for that specific purpose. We’ll drive it around to different neighborhoods on the property and also take it to food and wine events.”

As the evening progressed, Keller stepped away from the truck and reclined in an Adirondack chair next to France’s Jérôme Bocuse, where their conversations flowed from topics of food and golf to high-speed hot laps at Sebring International Raceway as part of the Ferrari Challenge. Nearby, Jonathan Wingo, the United States brand ambassador for the Balvenie distillery, relished the challenge of pairing a handful of rare single-malt whiskies with the various dishes served up by Beriau’s staff. “It’s a massive whisky,” he said, pairing the 21 Year Old Portwood with a po’ boy. “The honey and vanilla notes that characterize the Balvenie’s flavor provide a sweetness that competes with the richness of a heavy sandwich like this, but the 21 Year Old Portwood also has a velvety mouthfeel that allows it to stand up to the fried oysters.”

The following evening, Robb Report Club members and esteemed guests were treated to an eight-course meal that showcased the unique talents and personalities of each of the chefs and also featured divine wine pairings arranged by Spire Collection. The dinner began with a caviar dish created by Australia’s Shaun Hergatt that incorporated a silky smooth pomme puree and fresh uni. “It’s rich, it’s creamy, it’s fatty,” Hergatt said of his dish. “And we layer it with the caviar that gives the dish a beautiful salinity and all those pops of bliss. It’s just a very strong umami in the way that those three things come together, but it’s still highlighting the caviar as the star.”

From the onset, guests were quick to exclaim that a dish was the “best thing they’ve ever eaten,” only to effuse similar praises when the next course arrived. Some of those dishes, like Paul Bartolotta’s Agnolotti Del Plin (a classic Piemontese meat-filled ravioli), reflected the chef’s heritage, while others—like Keller’s refined spin on chicken and waffles—paid homage to southern cuisine. “We decided to really slow-braise those collard greens and kale with the bacon,” he said. “And we finished that with some pickled Swiss chard stems. The chicken itself was classic in our preparation—chicken breast bound with a little bit of chicken mousse wrapped in bacon—and we served that with the waffle and a little bourbon maple sauce and crispy bacon. How can you go wrong?”

Unlike in past years, where Robb Report’s Culinary Masters program was a series of competitions that aimed to uncover the next generation of international culinary stars, this year the program was organized as a three-day event—complete with a gala dinner, live and silent auctions, and a golf tournament—with all of the proceeds going to Ment’or, a nonprofit organization that provides educational opportunities, internships, and grants to aspiring chefs in the United States. “I think it’s important for a young chef who’s working in Charleston, South Carolina, for example, to be able to go to Europe or to California and the French Laundry or to [work with] a chef in New York,” said Daniel Boulud, who served a sea scallop dish accented by grilled broccolini chutney and pimento oil during the gala dinner. “A lot of young chefs are very loyal to their chefs—they really want to continue working for their chefs—but they want to also see and grow around it, and I think Ment’or plays a wonderful role in that.”

The charity also raises funds to support the U.S. team’s involvement in the Bocuse d’Or, the most rigorous culinary competition in the world, which was created by Chef Paul Bocuse in 1987 and is held every two years in Lyon, France. In 2015—after three decades of participating in the competition—the U.S. team finally claimed a spot on the podium, winning the silver medal. Now, all of those involved—including Keller, Boulud, and Bocuse, who together founded the Ment’or BKB Foundation to support Team USA at the Bocuse d’Or—are hoping that 2017 will be the year when the U.S. team climbs one spot higher on the podium. “It’s been almost 10 years now with the foundation, and I would have never in my wildest dreams thought that we would be where we are today,” Bocuse said. “It’s been a great achievement and now we can only hope for the gold in January.”

“It is a moment for us, for the United States culinary profession, to embrace the idea that we can go to Lyon to the Bocuse d’Or and come home proud that we’ve accomplished something that is going to make a difference for our country and for our profession,” added Keller.

On the final night, the chefs and guests again adjourned to the comfortable confines of the inn’s Octagon Bar and Gathering Place, just as they had done previously during the event. And, as was the case during those earlier nights, the conversation eventually turned to food. This time, however, the topic shifted slightly to the future of fine dining and what separates the very best chefs from the rest of the field. “At the end of the day, the food has to be delicious,” said William Bradley. “It’s not cosmetic cuisine.”

Bartolotta, taking a sip of a 2003 Sangiovese, expounded on that idea. “If the genesis of the dish isn’t from your own soul, it can never really be authentic,” he said. “The beauty of the [gala] dinner the other night is that everyone’s food was different and it represented who they are. We’re all the sum of our experiences and our training and our travels . . . so those who are really able to find their own voice have clarity of vision; and those are the ones who create really great food.”