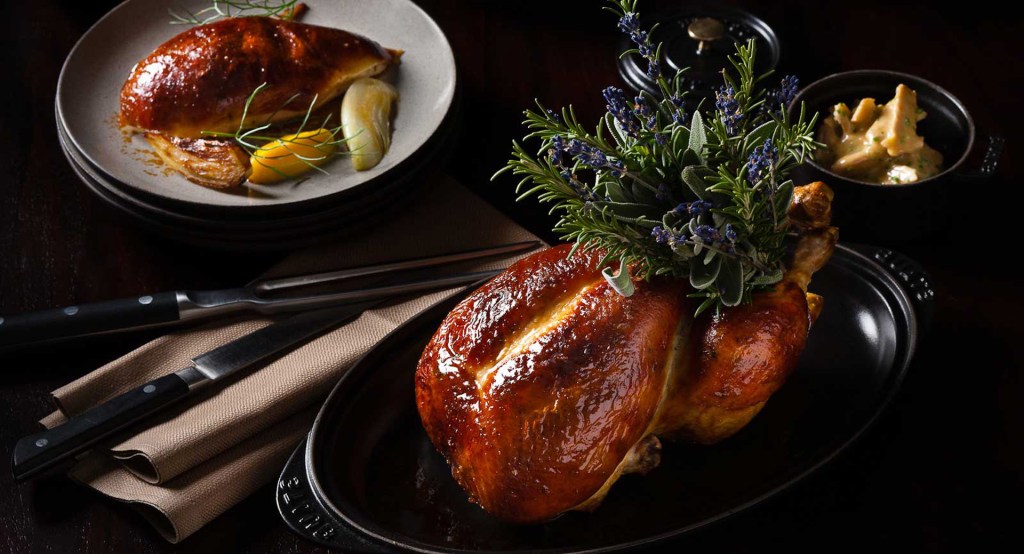 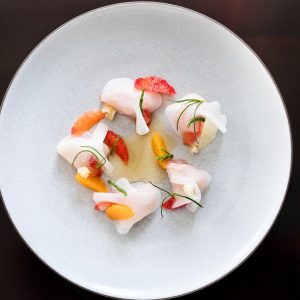 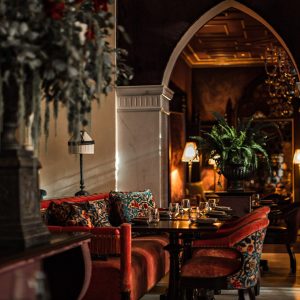 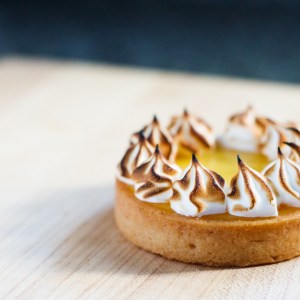 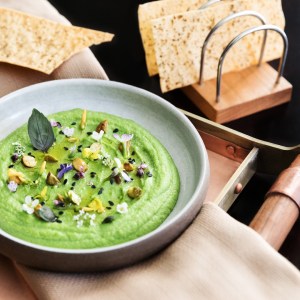 Adorned with bright watercolor flowers, leaves, ladybugs, and butterflies, then tied with a red satin bow, you can’t help but notice that the custom-designed box the barista packs your pastries in at the NoMad is beautiful. It’s as if you were receiving an elegant gift more than a snack to go. But as you wander through the lobby and mezzanine of new Los Angeles outpost of the NoMad, you notice the amount of care put into designing that simple box was no aberration. Like the rest of NoMad LA, it’s bright, playful, impeccably designed, a touch flamboyant, and plenty indulgent.

This week, chef Daniel Humm and restaurateur Will Guidara—the duo behind three-Michelin-starred restaurant Eleven Madison Park—opened the second location of their hotel-meets-restaurant-meets-bar NoMad, taking up residence in the old Bank of Italy building in LA’s revitalizing downtown. And as the end of the last decade saw dining strip away service and embrace austerity, the end of this decade shows restaurants reembracing theatricality, with the likes of NoMad leading the way.

When the first NoMad opened in New York in 2012, Humm and Guidara knew from the outset that they wanted to create a experience distinct from Eleven Madison. “We have a musical inspiration in all of our restaurants. It started with Miles Davis at Eleven Madison, and it’s the Rolling Stones at NoMad,” Humm told Robb Report. “The Rolling Stones come across like loud and loose and rock and roll, but they’re extremely studied and everything they do is intentional, and that’s what the NoMad is for us. We want to feel more casual, but not because we care less.”

For them, the NoMad would be more than a single restaurant that tried to capture that Rolling Stones attitude, instead they created NoMad with the idea of imbuing it with multiple personalities and experiences. And when they came to LA, they wanted that core of the restaurant and bar atmosphere to remain. “The name NoMad literally describes our neighborhood in New York, but the other idea of the name was intended to wander a little bit,” Guidara told Robb Report. “It’s meant to evolve and have different personalities. We always say it’s an urban playground. You walk in and can get lost in different experiences. We wanted this to feel different than New York, but very much feel like NoMad.”

That started with hiring the same designer as the New York locale, Jacques Garcia, but sent him in a different direction. “In New York, we looked very much to France to be inspired, and here we looked more to Italy because it was the Bank of Italy building. We wanted to dig deeper into the Italian design features,” Humm says, adding that in Southern California, they felt the space should be sunnier. “In terms of colors, we wanted to make it lighter and brighter. Where New York is quite heavy, quite moody, and here it is a little bit more color.”

The journey through the NoMad’s different experiences begins at 7 am, when Venetian-inspired coffee bar opens, allowing people to stand around raised marble tables to enjoy their morning espresso like Italians do, while sampling croissants and other sweets by pastry chef Mark Welker.

Walk out of the coffee bar and into the lobby where beneath a soaring, fully restored Italianate ceiling, people can lounge, work, and enjoy a more casual breakfast, lunch, or dinner of cobb salad or burger. A section in back called the library is reserved for hotel guests to sit and dine. But even off the lobby to one side there are little warrens to duck into for a more intimate conversation. While on the opposite side, the Giannini bar is a more upbeat spot for drinking award-winning bartender Leo Robitschek’s cocktails. And downstairs, the line outside the bathroom is because people want to take selfies with the massive door of the old bank vault that the lavatories are built inside of.

Overlooking the lobby is a reservations-only bar and the Mezzanine, where the culinary team will really flex their muscles, serving the NoMad’s more formal and most ambitious menu. But that doesn’t mean stuffy.

“The idea is that Eleven Madison Park is kind of very high level fine dining, dressed-down a bit. Then, NoMad is casual dining gussied up a bit. That’s it. Simple,” general manager Jeffrey Tascarelli says. “We do a lot of theatrical things, so it’s very old fashioned. We do a table-side baked Alaska. I mean, that’s about as old-school as you can get. The show and the fire? We love that stuff.”

Leading the show and fire will be Chris Flint, the executive chef overseeing the property’s six kitchens. He first started with Humm in 2008 at Eleven Madison Park, heading over to the New York NoMad to help open it before returning to Eleven Madison to become chef de cuisine. “After nine years, we have a way of working together,” Humm says of Flint. “There’s not so much conversation needed anymore. We understand each other and he’s an amazing chef and super creative.”

Flint arrived in LA six months ago to start preparing so his menu wouldn’t just be a duplicate of what NoMad in New York does, instead the food—like the building—would give diners a sense of place. There will be some commonalities with the New York menu. Like the famed chicken for two, where a whole roasted bird has a mixture of foie gras and truffles stuffed under the skin and then beautifully presented at the table with a bouquet of fresh herbs. “The chicken for two 100 percent is here,” Flint says. “They’d firebomb the building if we didn’t have chicken for two.”

But like all chefs arriving in LA from out of town, Flint has found great inspiration from wandering the Hollywood Farmers’ Market and local produce. “A forager brought me like 15 different types of citrus. It was amazing,” Flint says. “We geek out over this stuff, it’s just awesome.” The chef then took that citrus and used it to marinate Hamachi that he serves with daikon and agretti.

The LA inspiration in the menu goes beyond produce alone. The region is rich with immigrants from around the globe, from Korea to Mexico, who have brought their cuisine to the City of Angels. In one particular example, Flint shows how the whimsy and theatricality of NoMad combine with the influences of LA to create a distinctive dish.

As Flint walked through the kitchen off of the Mezzanine, he excitedly strided over to a stack of tissue-paper-wrapped wood blocks on a table in the corner. He started unwrapping the wood and described its contents as eagerly as a young boy who wants to show you what he just got for Christmas.

“We had these custom wood pieces made. We’re going to put this beautiful butcher block down on the table.” He unwrapped another smaller block that fit into a notch in the butcher board. “On this, we’re going to line up Santa Barbara uni.” He unwraps another little box and places it in the opposite corner, opening and closing the lid. “In here will be little crepes the size of little tortillas.” He points to four notches where small ramekins will be nestled. “You’re going to different condiments, like a bonito mousse and some pickled radishes.” He looked at his assembly of a set of bespoke boxes, crafted for NoMad alone to make the food it’s holding feel even more special.  “It’ll be like you’re building your own tacos! It’s just a fun, cool thing.”