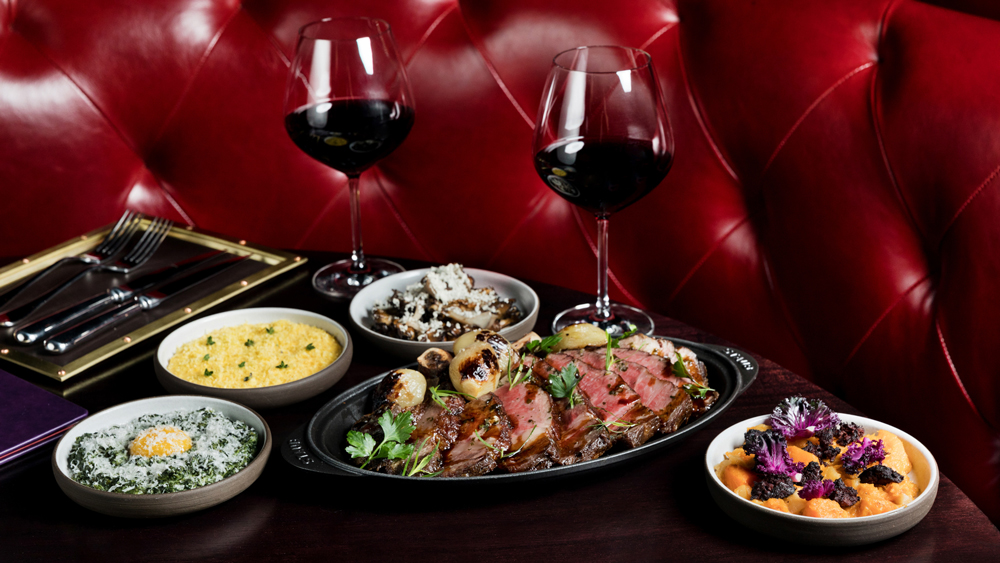 The NoMad restaurant and bar is a chameleon. Chef Daniel Humm and restaurateur Will Guidara’s original restaurant-slash-bar-slash-hotel in Manhattan feels quintessentially New York. Like Gotham, it’s big, bold, Beaux-Arts, and always lively. But when they decided to open another outpost, they didn’t want to just copy what they’d done before. The LA NoMad is lighter, airier, and driven by Southern California produce. It still feels like a NoMad, but the duo created a distinct experience for each location by digging into the culture and food of each city.

So when Humm and Guidara announced they were opening in Las Vegas, one had to wonder what culture they’d draw on in Sin City—a place where there’s a faux Eiffel Tower less than a mile away from a faux Statue of Liberty. But while they traversed the city, dined at places on the strip and off, and built up their new location, they think they’ve discovered something at the heart of Las Vegas food scene to inspire them. As they prepare to open their restaurant that’s part of the newly christened Park MGM, they sat down with Robb Report to discuss their early hesitation, what about Sin City won them over, and how they want to embrace Vegas, while still being themselves.

Why did you think Vegas would work for you?
DH: In terms of NoMad, obviously it’s such a great success in New York and now in Los Angeles, but also, we also realize there are only so many cities where a NoMad can work. I mean it has to be quite a major city. It could probably work in Miami, definitely Vegas, maybe Chicago but it can’t work everywhere. But when we came to Vegas I think we were all a little bit hesitant and a little bit nervous but then when we came here, like three years ago and we started having meetings.

You were hesitant?
DH: Everyone has a little bit different hesitation, but our hesitation was a little bit of we didn’t know if Vegas had the sophistication that we wanted or if it was as cultured as we would like it to be. But we didn’t fully understand Vegas.

WG: A lot of people sell Vegas short. Back in the day, people would say opening up in Vegas was selling out. This couldn’t be further from the truth. There’s magic in Vegas, here more than any other city in the world. From an entertainment perspective, things are built here that people have never built anywhere else. We believe in a certain amount of theatricality in the restaurants and it’s a pretty special place for that. We talked a lot about how an experience is half what you’re serving and half whether people are ready to receive it. No matter how great a meal is, no matter how fun it might be, if people aren’t in a good mood it’s going to be really hard to make it awesome. But people coming to Vegas are looking to have a great time and it’s so fun to serve people looking to have fun.

What changed you mind, Daniel?
DH: We realized that this city is really about hospitality. Like if Detroit is the “Car City” and LA is the “Movie City,” then I think Vegas is the “Hospitality City” and for us that’s having such a strong hospitality brand, it totally makes sense to be here. I don’t know the percentage of people working in hospitality in Vegas, but it has to be really high. There are a lot of amazing people here who have given their lives to working in hotels or restaurants, and they are true professionals—this is their career. Some other places people may use the industry as a jumping off point to something else, but here it’s not like that. You can feel it in the level of staff we’ve hired.

In the two previous NoMads, the design was inspired by the city and the existing building, how did you try to work with what you had in Vegas?
WG: In New York, the design was drawn from the Beaux-Arts architecture, and LA, it’s definitely designed for Italian heritage of the building [It was formerly the Bank of Italy]. LA feels lighter and airier than New York; New York feels clubbier than LA. Here we wanted to have a sense of place with Vegas. It’s a really fine balance between embracing the grandeur and the theatricality of Las Vegas by creating something that, in some ways, is over the top, but still has that NoMad DNA. It needs to be refined and not garish. It needs to be over the top without being too over the top.

How big is Vegas in relation to LA and New York?
WG: New York is a series of smaller rooms. LA is kind of a big lobby area. Vegas is two rooms, each one of them a very different layout.

DH: In a way it’s two restaurants. More than LA or New York, it’s two separate spaces. We call it the bar, but people will have full meals at the bar, just more casual bar food.

How did you build the menu for this location? You had the original in Manhattan, and then LA was the opportunity to use Southern California produce to give it a sense of place. What from a food perspective gives Vegas a sense of place?
DH: We always do a lot research and spend a lot of time here to really study what’s out here and what people eat. We wanted to do our version of the theatricality. We’re going to do tableside beef and tuna tartares. We’re doing a caviar dish with smoke. We’re doing a baked Alaska tableside, so we’re definitely doing showmanship. We’re allowed to go a little bit more out there, because people are in Vegas for three days and they want to have the best possible time they can have and every night is a party and we want to give that party.

WG: I think of what Daniel did with the chicken at NoMad. You can think of a normal roast chicken and then what he did through technique and ingredients like truffles—he brings something common to a very different place. And in Vegas, he’s doing that with the classic chop house. Daniel is taking it and tweaking it to add our personality. It’s familiar, yet ours.

DH: You can’t ignore that some of the most popular restaurants here are steakhouses, right? We wanted to add something that will be here for a long time, but you can’t change Vegas. You have to embrace what people want here and they do want steak, and sides, and whole roasted lobster, and bigger portion sizes. And that’s true what Will is saying. The biggest inspiration we found was in these classic steakhouses off the Strip that have been open 60 or 70 years.

Was there one classic steakhouse that really stood out to you?
WG: It’s tradition now when we open one of our properties, we go to one of the oldest restaurants in the city. It takes a lot of luck to be open 60 years, so we hope some of that will rub off on us. We went to the Golden Spear. We went to Hugo’s, where they give everyone a red rose when you walk in. You need to understand the past before you take something forward.