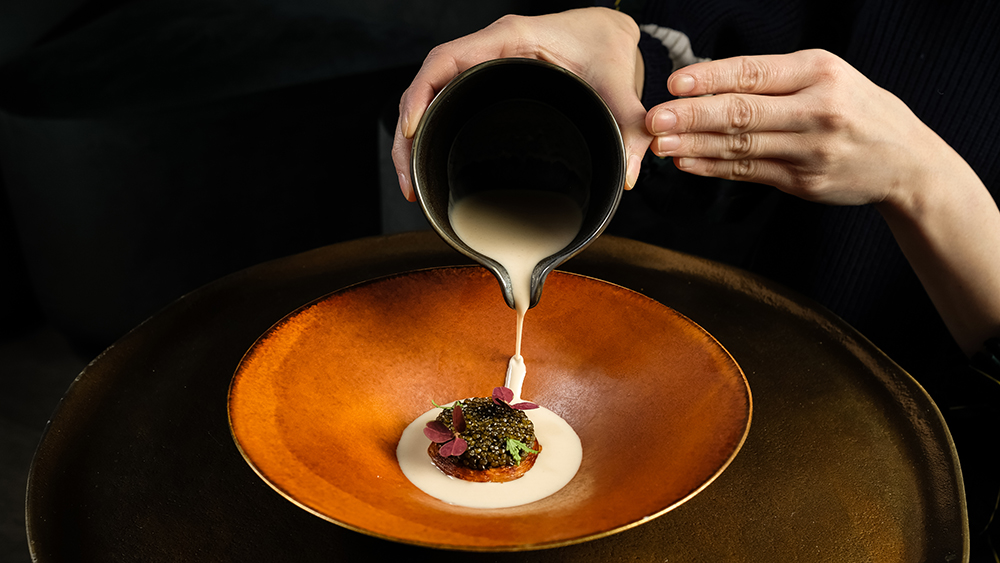 My first of seven courses at Jua is a burst of smoke and texture, a seaweed-wrapped bite of prawn, uni, smoked trout roe, rice and pickled cucumber which dances somewhere between Western and Korean. It’s both luxurious and familiar, not just an introduction to chef Hoyoung Kim’s wood-fire-centered cooking but a concise illustration of Korean cuisine’s evolution in New York City.

Korean restaurants have long been part of the fabric of New York dining, but the shift from traditional concepts, à la K-town barbecue, to chef-driven restaurants began about a decade ago. Though David Chang wasn’t cooking Korean food, his success with Momofuku Ko convinced Hooni Kim, who had worked at the critically acclaimed Daniel and Masa, that he could make serious, ingredient-driven Korean food without the trappings of fine dining.

“When Hooni opened Danji, it was monumental,” says Simon Kim, owner of Cote, the Michelin-star modern-Korean steak house. “The restaurant was small. He didn’t spend a lot of money, and he got a Michelin star. Danji made the dream attainable to us.”

The Butcher’s Feast at Cote, the restaurant’s signature meal.  Gary He

Soon after Danji, fine-dining Jungsik opened in the former Chanterelle space. Chef Jungsik Yim had studied at the Culinary Institute of America, made waves back home with Jungsik Seoul and returned to the States to share his vision of New Korean cuisine. He recruited talented cooks from Seoul, including Hoyoung Kim and Junghyun Park, all while “expanding many peoples’ framework of thinking about Korean cuisine,” Park says. The restaurant now boasts two Michelin stars.

Park and his wife, Ellia, now own Atoboy and Atomix, the former a casual affair, the latter a fully immersive, Michelin two-star tasting experience woven in with art, music and beverage pairings. “Just as New York City is a diverse, ever-evolving city, we also strive to be open to diverse influences and evolve and experiment,” says Park, who considers his restaurants more New York than Korean.

Like Park, many Korean and Korean-American chefs were attracted to New York’s high-caliber kitchens and culinary schools. Over time, an ecosystem of restaurant professionals, investors and consultants formed. Now, among 15-plus progressive concepts, the city is host to Michelin-star Jeju Noodle Bar, raucous Korean-American Nowon, East Village fine-casual Mokyo and Korean hot-pot restaurant On. Park says there’s room not only for greater diversity but for hyper-focused bulgogi, hwe (a Korean approach to sliced raw fish, similar to sashimi) and soondubu restaurants.

At Cote, Kim likens meals to steak omakase, for which diners sit around $10,000 smokeless Shinpo grills and eat nine bites of “the pinnacle of beef,” along with optional caviar and first-growth Bordeaux. He opened a second Cote in Miami earlier this year and, with Korean culture blossoming on the international stage, sees potential for growth in other US cities as well.

Still, Kim believes New York will remain the epicenter of fine Korean dining. “I profoundly believe we’re a city of our own, a global city,” he says, “and there will always be opportunities for cultures to fuse and create something exciting.”