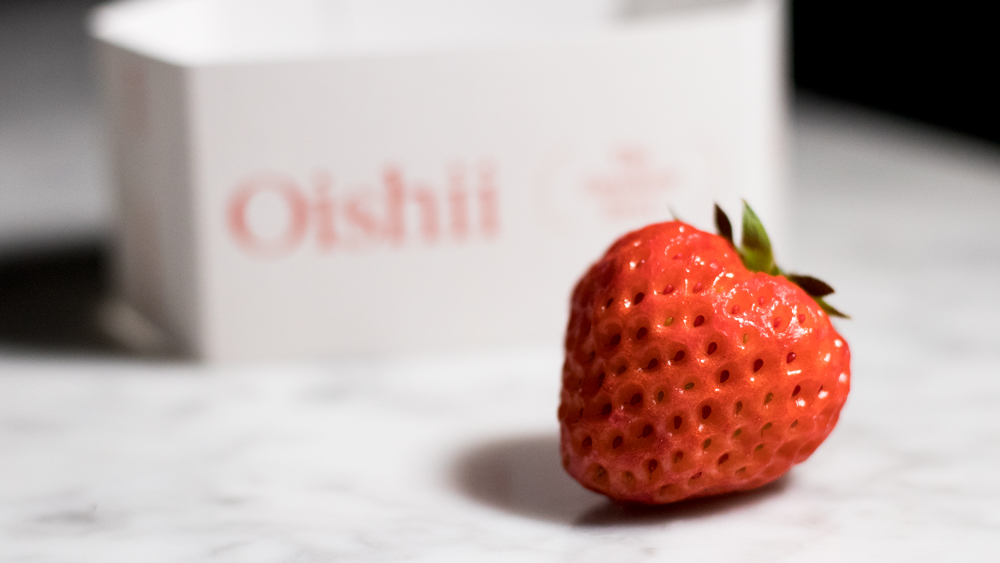 The berries arrived in a quaint plastic carton, each of the half-dozen resting in their own personal little hammock. Not quite as fetishistic as the box my iPhone came in, but the Oishii strawberries wanted to announce themselves as something altogether more special than the clamshells of fruit I regularly grab at the supermarket.

There’s a practical reason for the packaging, of course. When you’re paying $5 for a single strawberry bred more for flavor and texture as opposed to the durability mass market fruit prioritizes, you want the investment duly protected. Thus, Oishii’s Omakase Berry showed up in flawless condition for me to finally try them. But me just eating them alone would be no fun, so I decided to subject my unwitting wife to a blind taste test to see if she could tell the difference between a $5 berry and a supermarket one that cost about one-tenth that price.

Oishii’s founder Hiroki Koga brought this berry cultivar from the Japanese Alps over to the States, to grow in a vertical farm in New Jersey. Michelin-starred chefs in Manhattan became enamored with their flavor, aroma and texture, serving them as part of their tasting menus at haute locales, including Atomix and Sushi Ginza Onodera.

As Dan Barber, the chef behind Blue Hill at Stone Barns and Row 7 Seeds, has proselytized for a while now, a lot of American produce is bred not for the best flavor, but for yield, appearance and durability. For industrial farms, getting fruit and vegetables across state lines to your supermarket intact trumps making sure they’re as delicious as possible. Koga wanted to buck the factory farm ethos and grow a berry where he placed a premium on flavor and texture. And his company plans to expand, having recently secured $50 million in Series A financing.

While paying this much for fruit may seem quite novel in America, receiving my Omakase berries reminded me of wandering through the bottom floor of the Mitsukoshi department store in Tokyo and seeing whole muskmelons retailing for over $100 and lovingly displayed as if they were Chanel bags.

As pricey as they sound, Oishiis are not even close to the most expensive strawberries in the world. Mikio Okuda, at his farm about 175 miles west of Tokyo, grows world-renowned varietals. When Great British Baking Show judge Paul Hollywood visited before the pandemic, he was surprised to find that Okuda could charge around $130 for a flat of 10 berries. And then the farmer brought out the big guns—a varietal he’d been working on for years. A single berry cost 50,000 Yen, or nearly $460 each. The fruit left the skeptical Hollywood ensorcelled, but his pocket significantly lighter.

So for the relative bargain of just $5 a berry, I prepared myself to eat these little fruits. I waited for my son to go to bed so he wouldn’t steal the good stuff and then forced my wife to try the berries blind versus some pretty nice store-bought ones.

With no peeking allowed, she was handed each of the berries separately to sniff and bite. I’d like to tell you, dear reader, that there was much consternation and deep thought from my wife to determine which berry was which. Honestly, she clocked it pretty easily. On feel alone it’s apparent, as the seedless exterior is a dead giveaway. But then the flavor and texture is a pretty different experience as well.

As all mystery had pretty much been removed, I tasted the two side-by-side with her. Biting through the Oishii, its mouthfeel is softer and creamier than the supermarket fruit, while also having a more consistent texture throughout the flesh of the strawberry. Its acidity was less sharp while also having a lower level of residual sugar than its grocery cousin. And with that acidity and sugar turned down, what really came through with the Oishii was more of a floral, perfume-like flavor profile. What also stood out was the consistency of each of the Oishii berries. The flavor and texture was the same for each, unlike the clamshell of mass-market fruit, which featured a collection of tasty berries mixed in with some bland duds.

The Oishii was more delicious than any store-bought berry we tried in that sitting. But did that mean it’s superior to all other strawberries I’ve tried? Well, I grew up in a town in Washington state where each year we celebrated the harvest with a Strawberry Festival, so I’ve had some pretty delicious berries grown the old-fashioned way. Whether this berry is “worth it” all boils down to context. If I’m eating a single strawberry in the course of a tasting menu, the Oishii would feel more special and unique. But if I’m making some shortcake for the Strawberry Festival, I’d be perfectly happy with my grocery options.