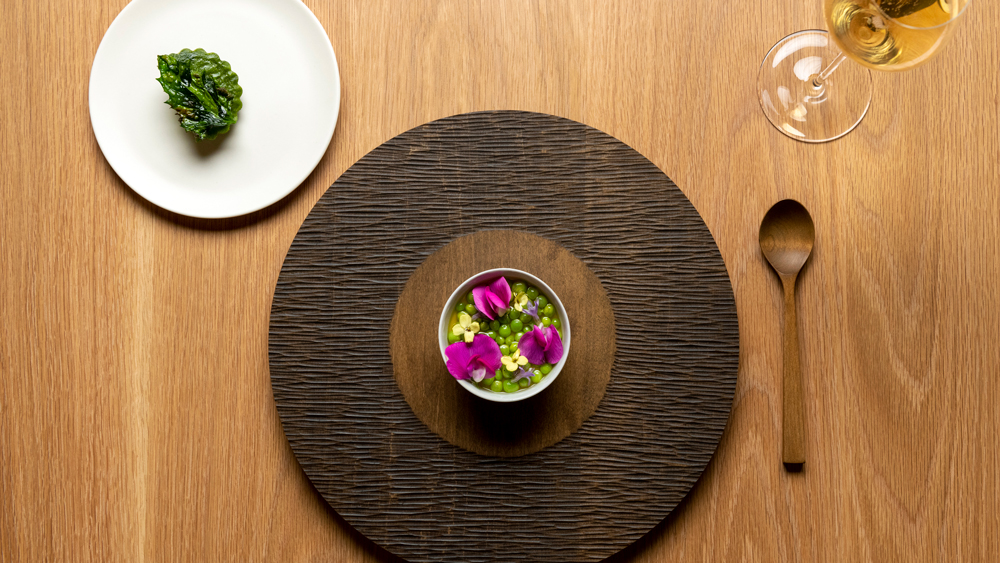 Chef Matthew Lightner wants to redefine what a destination restaurant is. It shouldn’t just be a place you travel to, eat at and then turn around and drive home from. He wants it to be a trip-worthy restaurant that you eat at, yes, but also a place that never leaves you, a place you never have to leave.

This is Lightner’s vision for his new restaurant, Ōkta, which opened July 13 inside McMinnville, Oregon’s Tributary Hotel. The eight-suite inn is about an hour’s drive from Portland, in a 100-year-old building in the Willamette Valley, and is intended to be a place for diners to spend the night.

“We believe what we’re really trying to do here, as far as our ethos, it extends beyond just a few hours of a meal,” he said. “It’s more than a dish. It’s about bringing people here, taking care of them, and allowing people to join us in our process and really feel our energy.”

Inspired by the immersive, Michelin-starred restaurant-inns of Europe, he teamed up with Katie Jackson and Shaun Kajiwara of Jackson Family Wines for the intimate restaurant and hotel project. Lightner helps curate the entire sleepover experience, from the fresh-cut floral arrangements on the nightstands to the shampoo in the bath, to the cheeses in the continental breakfast spread.

“Anything can go,” he said.

Improv is a bit new for Lightner, the former chef at two-Michelin-starred Atera in New York. But it’s an attitude he’s adopted for Ōkta, a tasting menu restaurant wholly dependent on the whims of Mother Nature. (Ōkta is a meteorological measurement for cloud coverage, a common sight in the Pacific Northwest.)

The restaurant has a dedicated farm a few miles away—much like California’s SingleThread and New York’s Blue Hill at Stone Barns—and often what lands on the plate is whatever seemed to thrive that morning, whatever survived the night. Each meal is a highly specific and unique expression of a very brief period of time on that land.

“The farm allows you to see how nature grows and moves and struggles,” he said. “I want to capture these moments, a day or a week, and bring that to the guests at Ōkta.

“Nature is continuously moving. Us as chefs, as humans, we tend to want to totally control it. We want [this ingredient] to be this size and have it for like nine weeks. I don’t want that. I want things to come in, I want them to inspire me, and I want to create things that will inspire our guests. And then we move on to another thing.”

On opening day, for example, he utilized chamomile, which was drying in the farm’s field and getting super fragrant that day. He infused it into cultured butter and brushed it onto smokey, grilled oysters. Malabar spinach was also beginning to grow in the field, so he plucked some leaves and added them to the toasty dish as well.

At the two-year-old farm, Lightner and farmer Katie Boeh cultivate 90 varieties of plants such as Ozette potatoes, icicle turnips, and young fennel. The farm provides about 35 percent of the harvest that is served in Ōkta. The rest is sourced locally, and the meat comes from Oregon producers. In the next five years, Lightner hopes to grow 80 percent of what he serves. That way the food on the plate is even more precise, even more in tune with its terroir.

“Terroir is more of a conversation. It’s the people, it’s the land, it’s the biology,” he said. “Everyone, especially myself, always talks about the magic and the soul and the beauty of the Pacific Northwest. We want to be able to tell a bigger story, and that story really starts with what we can’t see. It’s the microbiology of the area, capturing this essence, and trying to express these things.”

After dinner, you’ll retire to one of the inn’s eight rooms.  George Barberis

The farm is also equipped with an R&D center and a fermentation lab for further exploration.

“When we’re working in the lab, if we are growing kōji [mold] or inoculating other types of spores or fungi, it’s also escaping into that space,” he said. “These become these flavor molecules that really connect to our vegetables, our dishes and then ourselves. As we eat it, it attaches to us, and we grow into it and we become that as well.”

It’s an evolution that Lightner is excited to watch unfold, and he hopes that guests—profoundly affected by and forever connected to Ōkta—will come back year after year to do the same.

Dinner is served Wednesday through Sunday. Reservations are available on Resy.