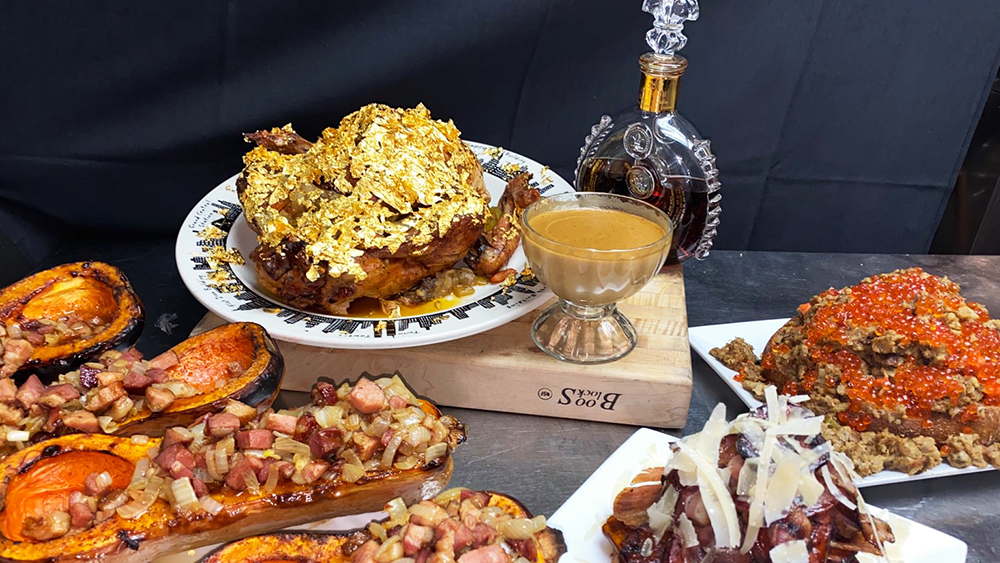 If you really want to one-up your friends come Turkey Day, this Thanksgiving dinner is truly one for the books. New York’s Old Homestead Steakhouse—which has been satiating carnivores in the Meatpacking District since 1868—is offering a six-figure “Thanksgiving Experience” which promises a lavish feast along with luxury gifts, five-star trips, and even Super Bowl tickets. All you need is $181,000.

First, let’s talk food. The dinner is designed to feed a party of 12 and features some of the most expensive ingredients known to mankind. The 20 lb. free-range bird ($5,800) is covered in edible gold flakes ($2,000), seasoned with rare exotic spices from the Middle East ($4,000) and literally dripping with extravagance as the gravy is infused with a bottle of Louis XIII cognac ($3,650).

Then, there’s the stuffing, it’s made with 12 loaves of bread ($125 each) and high-end seafood—including Alaskan King crab, Maine lobsters, Otoro tuna and caviar from the Caspian Sea that costs ($1,800/oz)—which is blended together using Champagne instead of water. The cranberry sauce is equally upscale and features a Taylor Fladgate 40 year tawny port reduction priced at $460 per bottle just because.

To jack the price sky-high, the steakhouse is chucking in a whole bunch of high-end gifts and bespoke experiences that make that fat price tag worth it. Highlights include a seven-day SeaDream Yacht Club Cruise for two (valued at $50,000), a shopping spree in the luxury playground that is Hudson Yards ($20,000) and four tickets to the Super Bowl LIV with first-class flights and five-star accommodation ($30,000).

You’ll also receive matching his and her versions of the latest iPhone, a bottle of special reserve Cristal, plus tickets to The Voice, the iconic Macy’s Thanksgiving Day Parade and a guided tour of NYC in a Bentley Bentayga SUV, no less.
“It’s like a 50th wedding anniversary, a 75th birthday, winning the lottery, one of those one-time-only special experiences,” co-owner Greg Sherry says.