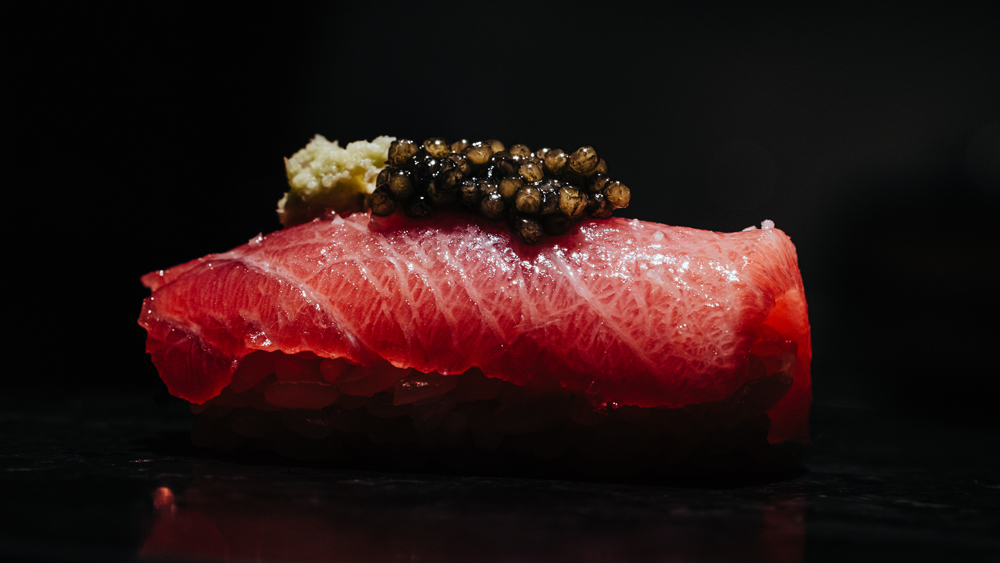 There’s a highly respected formality that goes into omakase-style dining, one of reverence for the ingredients, the chef and Japanese tradition. And while the pomp that surrounds that kind of meal can feel exciting, it can also feel stuffy and intimidating to diners new to omakase or feel unnecessary to diners accustomed to omakase who want a good time served alongside their nigiri.

A new omakase restaurant in Chicago’s River North neighborhood is hoping to redefine and demystify omakase, to make diners feel like they can really take part in the experience, not just be at the receiving end of it.

The Omakase Room at Sushi-san opens Thursday, Feb. 10, upstairs at the hip Japanese spot Sushi-san (63 W. Grand Ave.). The 10-seat omakase restaurant is designed to resemble a modern loft. Hip-hop and groovy soul music pumps through the space. Upon arrival, guests lounge in a living room and drink cocktails served over hand-chipped ice, then are guided to the omakase room for dinner.

Each seat is outfitted with a custom-made Lazy Susan for interactive service, and the chefs’ Japanese Hinoki cutting boards are at counter level, giving diners a clear view of their knife skills and an open window to chat with them over the 18-course meal.

“When we go eat omakase, it’s just like a temple to me,” the Omakase Room chef Kaze Chan said. “The one thing that I don’t like about it is it’s not fun. I don’t like that kind of feeling. [At the Omakase Room] we can talk a little louder instead of whispering. You can ask the chef questions, you can have fun with the chef. You can enjoy it beyond just the dinner.”

Amarit Dulyapaibul, who is a partner at the Omakase Room at Sushi-san, said they wanted to “break down the formality that usually accompanies this style of dining” while paying “homage to the spirit of Japanese omakase without being bound by its tradition.” That includes everything from mixing up the playlist to the way the chefs interact with the guests, while still taking the hospitality and the food very seriously.

“There’s such a respect for omakase dining in Japanese culture. And I think that level of respect is something that we are very careful to uphold,” Dulyapaibul said. “Watching Kaze work, seeing the care that he takes with all of the ingredients, seeing the way he treats his knives, seeing the way he treats all of the items he brings in, that level of respect is critical for us. But you know, being respectful and being thoughtful and intentional shouldn’t be in the way of having fun and feeling comfortable.”

Chan, who is the master sushi chef at Sushi-san downstairs, is joined by master sushi chef Shigeru Kitano (Momotaro, Japonais by Morimoto, Sushi Samba, Hatsuhana) behind the counter. To prepare for the opening, the team traveled around the world, sampling traditional omakase experiences in Japan and some others closer to home like at Masa and Sushi Ginza Onodera in New York.

“We were blown away by what we saw,” Dulyapaibul said. “The one thing that we found that all of us, unanimously, wanted an experience that was of that quality and of that standard, but that just felt more approachable, a little bit less formal.”

The Omakase Room benefits from the resources of its parent restaurant group, Lettuce Entertain You—the largest restaurant group in Chicago—which allows them to fly in rare fish daily, directly from Japan’s Toyosu Fish Market. Most of the fish are wild, line-caught species like Madai and Hamachi. They also partner with a team in Spain to source wild-raised bluefin tuna and others in the Faroe Islands in the North Atlantic to get salmon.

“Line-caught fish from Japan is incredible,” Chan said. “A lot of places can’t afford to get that.”

And its sister sushi restaurant downstairs ensures nothing goes to waste, a benefit when the deliveries are so fresh and occasionally a surprise.

“We won’t know what a menu is for any given evening until that morning,” Dulyapaibul said. “We’re writing menus almost up until guests sit down with us because fish are landing on our cutting boards that day.”

To Chan, this last-minute rush is nothing new.

“I’ve been doing this for many, many years,” he said. “I’ve seen [every fish]. But sometimes you don’t use it for 10 years. You might forget what it looks like.”

Some sample dishes on the Omakase Room’s opening menu include Akami (lean bluefin tuna) with shiitakes and black pepper; Akagai (red clams) with yuzu and lime; Hokkaido Wagyu with fresh-grated wasabi; and uni ice cream with rice crackers and mint. Chan is excited for guests to try the Sayori, served here with ginger and chives. No one else really carries that fish, he says.

“It’s a beautiful fish, but it’s so small that not that many chefs like to cut that fish because it has a lot of bones,” Chan said.

He looks forward to being able to share info like this with guests in the casual environment of the Omakase Room.

“A lot of people come to eat and they want to learn a lot of things, about fish, about rice, how you cut the fish this way, how you cut the fish that way, why you serve this one first, why you serve this one last,” he said. “When I see the customer enjoying the fish and their face is so happy, that makes me so happy too. It makes me feel like it’s worth it for me to do all of these things, to get the line-caught fish in and to present it for them, to explain it.

“I want to educate them how to eat it too, not just give them the fish and my job is done. And they get more confidence, so anywhere they go to eat omakase they can say, ‘hey, this is what I learned [at the Omakase Room]’ and they’re already thinking about when they will be back. That’s what my dream is, to teach a lot of people. It makes me so satisfied.”

The beverage program, led by Kevin Beary (Three Dots and a Dash), includes more than 100 bottles of Japanese whisky, a giant collection that any other 10-seat omakase restaurant would not be able to access or store. The restaurant also offers sake, wine and cocktails like the house Old Fashioned made with banana-washed Nikka Yoichi single malt, fresh banana cordial and Okinawa brown sugar.

“We want to make sure that every single thing that a guest experiences when they’re in the Omakase Room is the best in Chicago that night,” Dulyapaibul said. “We want to be the best omakase in Chicago.”

The Omakase Room offers two seatings, Thursday through Saturday, at 5:30 pm and 8:30 pm. Reservations are now available on Tock.