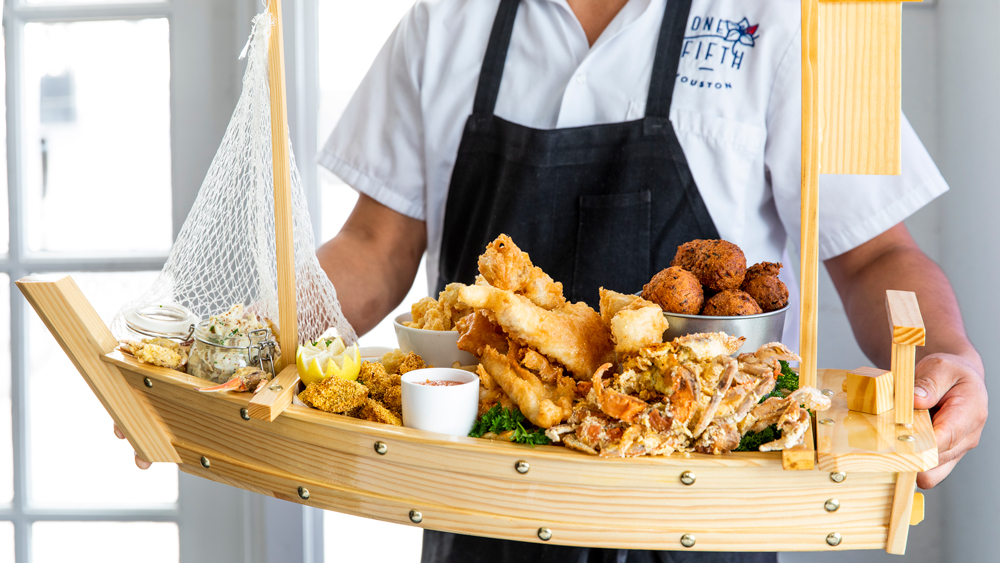 You can’t talk about Houston chef Chris Shepherd opening a new restaurant without talking about him closing one. That turnover rate is not usually something to brag about, but it’s the curious and successful recipe for One Fifth—his ambitious culinary goal of opening (and closing) a new concept every year, in the same building, for five years.

He’s been on a steady clip for the past three, and on Aug. 12 he’s set to open number four: One Fifth Gulf Coast.

“I didn’t think about ‘Gulf Coast’ until a month and a half ago, but it was something that I’ve always wanted to do,” Shepherd said. “This is the kind of food we all love to eat here. I want it to be fun. I want it to be your casual, everyday type of place where you stop by and grab a couple of beers and a dozen oysters and relax.”

One Fifth Gulf Coast is set to be his most close-to-home iteration to date, and the one he’s the most excited about bringing to life. Its concept is a callback to his hit restaurant Underbelly, a love letter to the diverse cultures and cuisines that make Houston special, which he closed last year.

To Shepherd, Gulf Coast cuisine is inherently personal as well. It’s seasonal and locally sourced, but it’s not overly technique-driven. It’s not complicated. And it’s traditionally not all that pretty. But it’s got big, diverse flavors—from the Creole and Cajun spices found in Louisiana to the Vietnamese and Mexican influences in Texas to the backwoods Panhandle dishes found in Florida—and that’s the kind of food he wants to master and bring to its ideal fruition.

For inspiration, he recently took his staff on a road trip through the Bayou. (Chef de cuisine Matt Staph, culinary director Nick Fine and pastry director Victoria Dearmond all grew up on the Gulf Coast of Texas.) “Everybody’s ideas were all over the place. I was like, look, get ready to sit in the car and learn something,” he said. They dined on boudin (pork-and-rice sausages), fried catfish and pickled greens, buckets of jambalaya and bread stuffed with jalapeños, among other regional dishes.

“This is not to be disrespectful by any means, but I was like, guys, look at this food. It is put on your plate. It is what it is. But the thought process behind it and the flavor profiles are a perfect fit. There’s acid, there’s sugar, there’s heat,” he said.

The hardest part has been narrowing down all of their ideas. The goal was to perfect 25 dishes for the menu and then add and take away seasonal dishes as the year progresses.

He wants to highlight coastal favorites like fried catfish, rabbit and dumplings and turkey fricassee. He wants to put fried chicken in tamales. He wants to cook quail “King Ranch casserole” style, with cream and peppers. He wants to master flounder almondine, cooking the fish whole in a hearth oven. He wants to do a great barbecued shrimp. He wants to make a salad out of muffaletta ingredients. He wants to fill a giant wooden sushi boat—complete with the mast and nets—with a “captain’s platter”: mounds of fried, raw, roasted, smoked and cured shellfish.

And he wants to serve stone crab the old-school way like they do it at Joe’s Stone Crab in Miami. “I just started seeing [stone crabs in Houston] this year and I was like, nobody really messes with these,” he said. He talked to his fishmonger, who said he could get him 40 pounds a day. “And I was like, let’s go. Let’s make these popular in our waters. We have such a distinct fishing area in the Gulf, but it’s mostly snapper, grouper and then some other stuff that gets shipped everywhere else. It’s hard for us to get fish out of our water. But we are going to try and break that cycle a little bit.”

To give them even more room to be creative, Shepherd is adding weekend brunch to the menu, a first for One Fifth. Desserts will include key lime pie made with black limes and cocktails will be twists on Southern classics and Bourbon Street hangover-inducers such as Hurricanes, Hand Grenades, Ranch Water and Texas Tea.

Even though it hasn’t opened yet, he already sees it becoming a standalone brick and mortar after its scheduled closing date in 2020. That was actually always the plan with his One Fifth project: operate a pop-up restaurant for a solid 11½ months at a time to test out an idea. At the end of the year, he would shut the restaurant down and replace it with something else, changing up the décor and wine lists and everything else that goes into opening a new spot.

But if he liked it enough, he wouldn’t let it die; he’d turn it into a permanent fixture in the Houston dining community, albeit in another location. “I had the idea to change the concept every year, to figure out what I want to do when I grow up,” he said. “Even if I came out with one restaurant out of this, I did what I was trying to do. That’s kind of been the goal: How much do you want it? Are you willing to learn everything about it? I read everything and I look at everything and I study it, you know? It’s what I tell my cooks all the time: Be a student of the game.”

The first concept, a steakhouse, opened in 2017. Diners—and perhaps more importantly, Shepherd—loved it, so in 2018 he shuttered Underbelly and replaced it with a steakhouse, Georgia James. The second concept, romance languages, he wasn’t as crazy about. “I learned real quick: I love a good bowl of pasta, but I don’t want to make it for a living,” he said. “People put their entire lives into making pasta and they do it really, really well. So I’m going to let them do that.”

He retired that concept and replaced it with the third, which closed July 31: Mediterranean. He threw himself into making the best hummus and pita he could, and fell in love with the flavors and techniques. He almost decided to scrap the One Fifth project altogether and keep it running through the remainder of his five-year lease. But he relented and is now looking for a location to keep that restaurant alive. He plans on opening it as a standalone property in the near future.

One Fifth Gulf Coast will be the fourth and penultimate concept. “And the fifth edition of this?” Shepherd said. “I have no idea what it looks like.”

One Fifth Gulf Coast will be open until July 31, 2020. Reservations are now available on Resy.