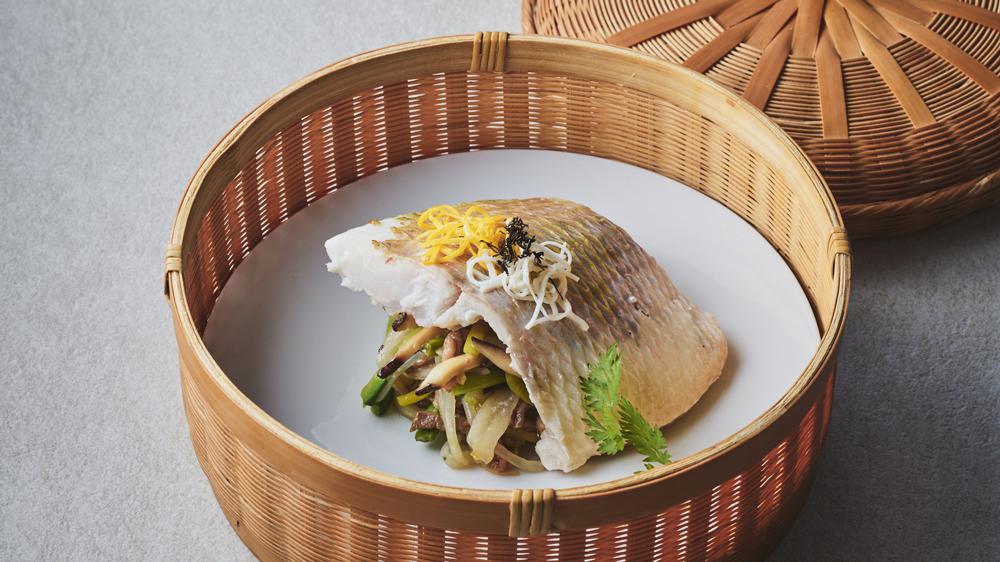 The chefs at Seoul’s Onjium are not just Michelin-quality artisans, they’re also lauded scholars, certified trainees and instructors of ancient Korean cuisine. And now, for the first time ever, the culinary team is taking their one-star-winning dishes out of the research institute and to the other side of the world, opening a second Onjium in New York’s Meatpacking District. Service begins Friday, Nov. 19.

Located inside the new Genesis House, an immersive project from the luxury auto manufacturer to exhibit their cars alongside authentic Korean culture in the US, Onjium will replicate many of the traditional dishes they’re known for, with some made-in-America tweaks.

“Genesis really wanted to have a restaurant in this space that showcased Korean food in its proper form. We agreed because it was a great opportunity to showcase our food outside of our own borders,” co-head chef Park Sungbae said through translator Won Chung, chef de partie of Onjium. “New York is the cultural center of the world in many aspects, and it’s an incredible honor to be here. We hope through this project we’re going to be able to reach people from all over the world and inform them that Korean food can be like this.”

Inside Onjium in NYC.  Photo: Courtesy of Genesis House.

Onjium restaurant was founded in Seoul in 2013, in conjunction with the Hwadong Culture Foundation, as part of a four-story research institute. The institute comprises three studios—food, fashion and architecture—dedicated to preserving traditional, uniquely Korean culture, and training apprentices on how to keep it alive and incorporate it into modern society. Onjium began publishing their own cookbooks in 2016 and collaborated with Tartine bakery on a Korean-style sandwich in 2019. In 2020, they received their first Michelin star, and held onto that star this year.

In the Korean culinary studio, a professor comes in bi-weekly to give lessons on ancient recipes; the fellows take regular field trips to other regions of the country to examine their dishes and markets up close; “master” chefs also visit the studio to demonstrate their techniques. Then, the culinary team revives these long-forgotten recipes using local, seasonal ingredients.

“It’s not really about teaching, but rather we want to show the beauty of Korean food,” Sungbae said. “We’re not extravagant or flashy, but rather we like to be very simple and fundamental in the cuisine that we showcase.”

For the New York menu, Sungbae and his co-head chef, Cho Eun Hee, went as far back in the history books as they could, collecting Korean royal cuisine recipes and dishes that were found in noble households in the 1300s, during the Joseon Dynasty. Eun Hee was trained at the Institute of Royal Court Cuisine and is supposedly one of only 20 scholars ordained by the government as a “protector” of the cuisine.

Each course on the tasting menu tells a story.

The team has been in New York for months, visiting local markets and updating recipes with seasonal and regional ingredients.

“In regards to New York, we’ve taken this method and this philosophy that inform us in our studio, and we’ve found ways that we can replicate a lot of the flavor profiles of our dishes,” Sungbae said. “Obviously, we’re in a different market, a different part of the world. Some of the ingredients we had to substitute because we couldn’t find them. For instance, we use a Korean mountain root in a lot of our foods, but we couldn’t find that here. So, we substituted it with parsnips, which we find is a very sweet root vegetable and is a very delicious alternative.”

“We have a lot of cooks in our kitchen who have never been to Korea, weren’t raised as Koreans and don’t have a background in Korean cuisine,” Eun Hee said through the translator. “Because they didn’t grow up with this food, because they’re unfamiliar with it, we’ve had to educate them on the culture, a lot of the nuances. First and foremost, we want to deliver the message, the feeling, the emotion that you get when you’re cooking and eating Korean food.”

Their American team needed to learn some basic tenets of Korean food like the concept of yaksik gongwon, which means food can be eaten like medicine; it can heal your body and your soul.

“Korean food shows a lot of care and reverence to the person you’re trying to feed, and there’s also a great reverence and respect when feeding older people,” Sungbae said. “It’s very hands-on. It requires a lot of steps, a lot of effort. Making thin slices, grating, fine mincing … This is very hard and time-consuming and strenuous, but we do this because we want the people who eat our food to eat it as comfortably as possible. We use a lot of techniques to really replenish and restore your body.”

Eun Hee said Americans tend to have a very narrow view of what Korean food is—they like very salty, pungent and spicy dishes like stir-fried squid and rice cakes.

“What we hope to do at this restaurant, using strenuous research, is show them a different side of Korean food,” Eun Hee said. “It is much more diverse and can be very refined, very elegant, very elevated, much more than what people are used to getting.”

In addition to the restaurant, the 45,000-square-foot Genesis House includes an auto showroom (on the first floor), tea pavilion and library (on the second), which features ancient Korean art and texts. The space was designed by Seoul-based architecture firm Suh Architects and Arumjigi, a nonprofit that promotes traditional Korean culture. The ceiling is decorated with hovering wood shingles and suspended oak beams to resemble Unhyeon Palace, the personal abode of the last emperor’s father, and the tables are adorned with Hanji rice paper placemats, ceramics and metal vessels. The staff’s uniforms were designed by Bourie, an avant-garde fashion brand based in Seoul.

Although the Genesis House does not sell cars directly, it does have a gallery-like showroom on the ground floor.  Photo: Courtesy of Genesis House.

The New York restaurant won’t be run like the Seoul institute, but education will continue to take place.

“While we’re not going to be a research institute per se, like the one in Korea, we always emphasize to our cooks and chefs to have ‘thinking hands.’ So, when you’re cooking, always be very deliberate and thoughtful in what you make,” Sungbae said. “We’re always going to be striving to get better, improve, and find new ways to progress the Korean cuisine.”