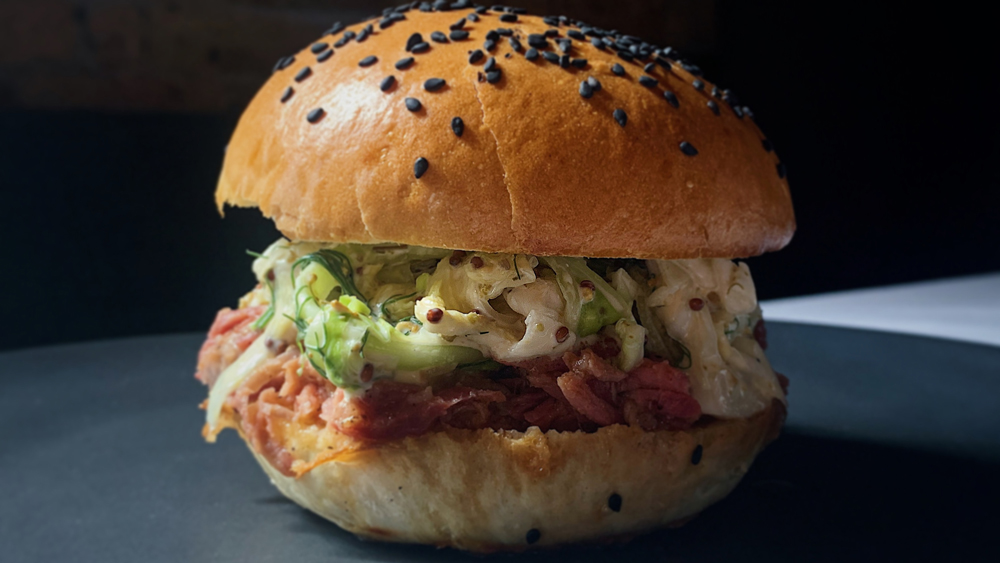 On any given night at the Michelin two-star Oriole before restaurants shut down for dine-in service, chef-owner Noah Sandoval and his team could serve gorgeously luxurious 15-course tasting menus to 40 guests and make it seem effortless. So, shifting gears to feed 50 people Carolina-style barbecue pulled pork sandwiches on homemade brioche buns should be a snap, right?

“I’ve been working in restaurants for 20 years at least and the past six years I’ve cooked, but it’s not a push for me,” Sandoval admits. “The last week I’ve been working as a line cook and it made me feel my age. My lower back was killing me.”

All lighthearted gripes aside, Sandoval and his wife and business partner, Cara, knew since they temporarily shuttered Oriole in March they’d eventually shift focus and get back to business. On May 2, they posted a simple photo on Instagram of a luscious-looking pulled pork sandwich piled high with fennel slaw announcing Oriole at Home. Their elegant-yet-minimalist restaurant set down a quiet alley in Chicago’s West Loop would now offer takeout.

Each week, Oriole will serve a finite number of meals until they sell out, like the 150 they made the first weekend that were snapped-up within almost 24 hours. The open-ended series kicked off with $50 meal kits for two inspired by Sandoval’s Virginia upbringing: Carolina-style Berkshire pulled pork shoulder sourced from D’Artagnan, buttery brioche buns, baked black eyed peas, braised collard greens, anise-forward fennel slaw, and moist and spongy pound cake Cara made using her Grandma Schmidt’s recipe. That dessert came with a sticky-yet-silky pink peppercorn gastrique originally paired with foie gras on Oriole’s opening menu from early 2016, adding a touch more decadence.

Sandoval, who talked with other Chicago chefs like Alinea’s Grant Achatz and Jeong’s Dave Park to gain knowledge about re-opening Oriole with a more casual focus, works alongside Cara, but also his chef de cuisine Jeff Eichem and cook Bryan Prado, not to mention sommelier Aaron McManus, who is pairing wines, including some high-end bottles from Oriole’s cellar. Prior to the shutdown, they had 25 total staff; now it’s basically just five. After barbecue, Sandoval says it’s somewhat fair game and each chef will create the rotating menus based, really, on food they love to cook and eat, whether that’s New Orleans-style Southern, Alsatian, Mexican and more.

“We can’t re-create Oriole; I can’t put out 50 dishes [like that],” Sandoval admits. “So why not do something homey and comfortable that we can change or expand on? I miss cooking 15 courses for 40 people, but it’s nice cooking pasta and chicken. So, we said we want to cook like we’re cooking at home.”

Starting with barbecue was an easy choice for Sandoval as it’s a food he grew up eating and loves to cook. The first meal kit was, he admits, pretty casual. Looking ahead at future menus, he says they’ll prepare more refined options, but will keep the price point around the $50 mark. Cara will open up ordering each weekend after that service ends, for curbside pick-up the following Thursday through Saturday. And around the corner at the Sandoval’s one-star Michelin spot Kumiko, partner Julia Momose is selling full bottles of spirits like Japanese whiskey, sherry, sake and wine as well as cocktail kits, bottled spirit-free drinks, non-spirit grocery goods and home items like beautiful candles.

“She’s curating an experience as close as she can to Kumiko,” Sandoval says. “You go to Kumiko for extreme luxury even though it doesn’t have to cost extreme. It’s simple and straight forward—that’s how she is.”

And that’s what people seem to want right now.