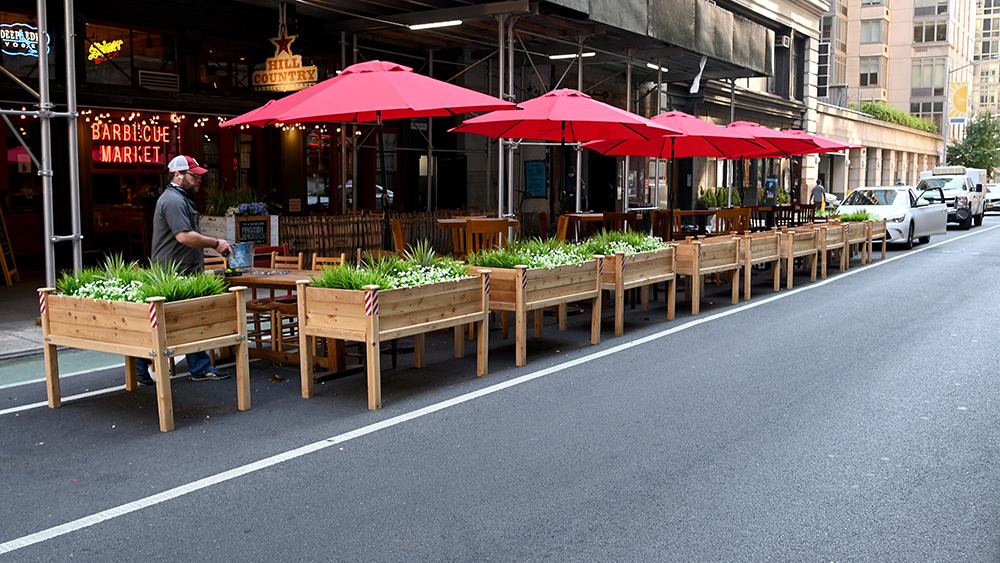 This time, City Council Speaker Adrienne Adams weighed in on the program during a recent breakfast, saying, “Outdoor dining should be — in my perspective — should be sidewalk structures instead of the structures that we have in the streets now that a lot of them have turned into other things, which they were not meant to be.” (Her office later clarified that this was only her opinion, and not representative of the larger city council’s stance.) Predictably, that statement has drawn condemnation from outdoor-dining proponents and even other city-council members, as reported by Streetsblog, a local news outlet.

Currently, a program that would make outdoor dining permanent in the city is winding its way through the legal system. Earlier this year, the City Planning Commission approved a plan that would allow for outdoor dining on sidewalks and in roadways, but the city council is waiting until the lawsuit against the program is resolved to make its decision. At least one city council member was taken aback by Adams’s statement, though. “The use of road space for outdoor dining has been an overall positive development,” Erik Bottcher told Streetsblog. “Banning all restaurants from using road space for dining would be a mistake.”

In fact, if restaurants were restricted to using only sidewalk space for outdoor dining, they would find it near impossible to expand their operations. The requirement for outdoor dining notes that there must be at least 12 feet of space for a sidewalk café, but about 80 percent of city sidewalks are narrower than that. And more than 92 percent of sidewalks are less than 15 feet wide, which would continue to pose problems for pedestrians.

Some argue that the use of roads for outdoor dining structures has inconvenienced drivers, who have lost parking spots to people enjoying their pizza and burgers on the street. However, a spokesperson for Transportation Alternatives, an organization that supports outdoor dining, claims that the Open Restaurants program transformed just 0.29 percent of parking spaces, while saving 100,000 jobs.

Mayor Eric Adams, who will ultimately have a say in whether the program becomes public, stood by outdoor dining after Speaker Adams’s comments came to light. A spokesperson for the mayor told Streetsblog, “Mayor Adams supports a full, equitable, permanent Open Restaurants program that all New Yorkers can be proud of … That means resuscitating local restaurants all across the city post-pandemic with seating on the sidewalk and in the roadway.”

While Speaker Adams may not be too happy to hear that, the hospitality industry likely is.