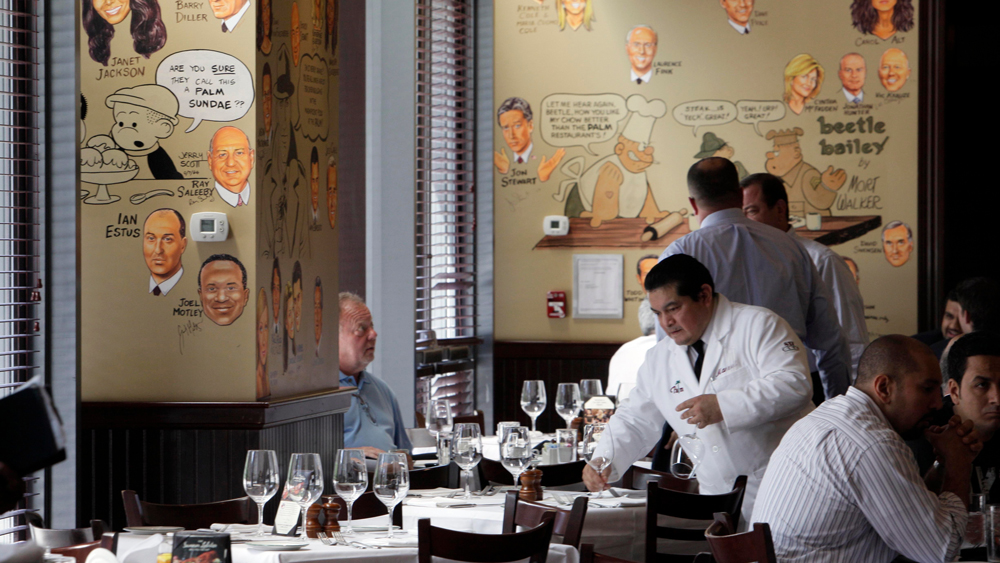 As family feuds go, it’s not Succession. But the parent company of the clubby, caricature-heavy Palm steakhouse and Italian restaurant is now in Chapter 11 bankruptcy protection, all because of a lawsuit between family members generations removed from the founders.

Pio Bozzi and John Ganzi, two Italian immigrants, originally opened the Palm in New York in 1926. Its parent company, Just One More Restaurant Corp., is now run by Bruce Bozzi Sr. and Walter Ganzi Jr., third-generation descendants of Pio and John. They are the ones who, since 1972, have licensed the rights to more than 20 Palms around the country, including three in Manhattan and an LA location that’s a celebrity power lunch hot spot.

The original Palm, at 2nd Avenue and 45th Street, closed in 2015. Among the co-owners of that location were Garry Ganzi and his sister Claire Breen and the late Charles Cook, three more of John Ganzi’s grandchildren. Their trademark lawsuit, first filed in 2012, stems from the fact that they are also minority owners of the very concept of the Palm—its intellectual property. For that, they’d been receiving a flat annual fee of $6,000 for each of the franchises, rather than a cut of revenue. (According to Aaron Elstein of Crain’s New York Business, a royalty of 5 percent would be typical.)

In December, Manhattan Supreme Court Justice Andrea Masley ruled in the plaintiffs’ favor, ordering Bozzi and Ganzi to pay $73 million in restitution for unpaid royalties, plus interest and attorneys’ fees, for a total judgment of approximately $120 million. Masley said the $6,000 payments “grossly favored” the majority owners and constituted “a textbook example of fiduciary misconduct.”

In a statement issued to multiple media outlets, the plaintiffs’ co-counsel, Fred Newman, called the bankruptcy “a clear stunt,” while the Palm Restaurant Group was quick to stress that it will have no effect on the operation of the restaurants (as is typically the case in Chapter 11 filings).

“We are having a good year,” executive vice president Bruce Bozzi Jr. —a fourth-generation family member—told Lisa Fickenscher of the New York Post. Which is a good thing to say if you’re in Chapter 11, but maybe not if you’re trying to get a $120 million judgment lowered.