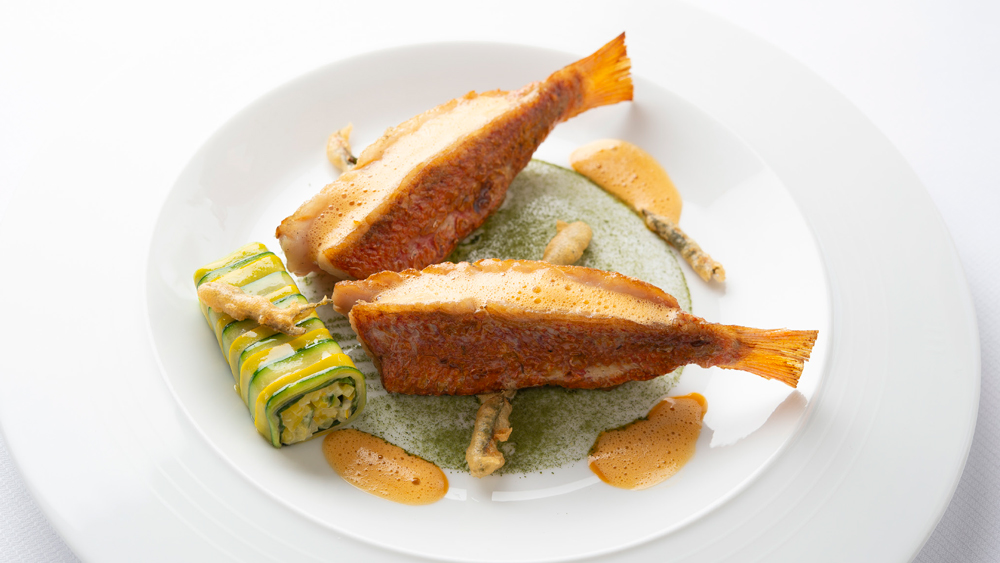 This week, the august gastronomic guide unveiled which restaurants in its home country of France would earn coveted Michelin stars. It was one of the most eventful star unveilings we’ve seen. Three restaurants saw their third star taken away, while two more were elevated to Michelin’s highest honor. And Sebastien Bras—who famously returned his three stars because he no longer wanted the pressure of maintaining them—got two of them back against his will.

In Paris, the announcement was a little less fraught. Acclaimed chef Pascal Barbot was among the three chefs to see their restaurants demoted to two stars when L’Astrance fell from grace, but otherwise the top of the restaurant game in the City of Light remained unchanged. Here are the nine Parisian restaurants earning Michelin’s highest honor.

“Fresh-picked” can be taken literally at Alain Ducasse’s Plaza Athénée, where everything from the Bonnotte potatoes to the baby fava beans are grown exclusively for guests and harvested the morning of diners’ meals. In 2014 the restaurant temporarily closed to shift its focus to all things eco-friendly under the leadership of executive chef Romain Meder. Initially upon reopening in 2015, Alain Ducasse au Plaza Athénée was demoted to two Michelin stars, only to quickly climb back to three in 2016. The restaurant’s natural-focused ethos extends from its pesticide-free produce to its simple preparation techniques and “fish-vegetables-cereal trilogy” philosophy, which Ducasse asserts promotes a diet more in tune with nature and better for health. You’ll find traditional French fare on the menu, as well as dishes inspired by 7th century buddhist-influenced Shojin cuisine.

Pavillon Ledoyen’s deep Parisian roots date back to 1842, when the restaurant was first erected in the Champs-Elysées’ gardens. While you can catch a glimpse of the original painted moldings and ceiling in the upstairs dining room, chef Yannick Alléno, who took over in 2014, brings a modern sensibility to the historic site, which earned the spot a third Michelin star just seven months after he started. Alléno’s pet technique for making sauces are “extractions.” This entails first extracting liquids from ingredients and then reducing them using a technique called cryoconcentration, which involves a combination of sub-zero temperatures and centrifugal force. Diners can enjoy the fruits of this methods in dishes like a dessert that features a coffee-flavored fir-tree extraction jelly.

Today, there are few chefs quite as influential as Alain Passard, but back in 1986 he was simply trying to fill his mentor Alain Senderens’ big shoes. That’s the year Passard took over Senderens’ restaurant Archestrate. Passard renamed his new venture, Arpège, the French word for arpeggio, a name that like the establishment’s original name (which means orchestra en francais) pays tribute to his second love: music. Before arriving at Arpège, Passard cut his teeth at the Duc d’Enghien at the Casino of Enghien and the Carlton in Brussels, where he was awarded his first Michelin stars. Arpège earned its third in 1996 and has held onto them ever since—even after adopting a plant-centric menu in 2001. Guests can sample the signature dishes that put Passard on the map, such as his famous l’arpège egg—the hot-cold, hard-soft boiled amuse bouche you’ll now find tributes to at fine-dining restaurants around the globe, maybe most notably at David Kinch’s Manresa.

While many Michelin-star-winning chefs could be considered culinary royalty, Epicure’s chef Eric Frechon bears an additional, extra-official-sounding honorarium. He was decorated as a Knight of the Order of the “Légion d’Honneur” by Nicolas Sarkozy in 2008—just a year before he was first awarded three Michelin stars. The self-described “control freak” prides himself on his ability to elevate simple—even cheap—ingredients into Michelin-star-worthy fare. Though, there’s no shortage of decadence on his menu. You’ll find classic French cuisine, such as whole roast chicken cooked in a pig’s bladder (a signature dish) and black truffle, artichoke, and foie-gras stuffed macaroni.

Guy Savoy is one of the true legends of French gastronomy.  Laurence Mouton

Guy Savoy is almost as much a French institution as the iconic sites that surround it (namely, the Louvre, Pont Neuf, and the Seine). Savoy’s signature style, which he perfected in the kitchen of the legendary Maison Troisgros, blends a reverence for the natural attributes of his ingredients, mastery of technique, and a dash of bold creativity, which you can taste in signature dishes, such as his artichoke soup with black truffle, ice poached oysters, and ‘open’ mille-feuille. In addition to holding onto his three stars since 2002, Guy Savoy has opened a number of lauded satellite restaurants, including a stateside version of Guy Savoy located in Vegas’s Caesars Palace.

Abandoned by his parents and placed in an orphanage at 13, chef Bernard Pacaud found salvation in the kitchen of Eugénie Braizer’s Col de la Luère. The three-star-winning Lyonnais chef took Pacaud under her wing, providing him with both a roof over his head and a place to learn the craft.  First nabbing his own third star in 1988, Pacaud has been holding onto the stellar Michelin rating for longer than any of Paris’s other three-star restaurants. L’Ambroisie lives up to its name which means “food of the gods” with its lavish, stunningly plated dishes like sea bass and artichoke served atop caviar. And even if the gods don’t literally dine there, some pretty powerful mortals do: In 2015 presidents Barack Obama and Francois Hollande enjoyed a working dinner at L’Ambroisie.

From within the Four Seasons Hotel George V, chef Christian le Squer combines nostalgic French flavors with ambitious new techniques. “My cooking is like a Chanel suit worn over a pair of jeans,” he once said. You can taste this amalgam in dishes like his Parisian-style gratinated onions or line-fished sea bass served with caviar and buttermilk (a nod to growing up near the Morbihan sea in Brittany). “His signature is all over the superb dishes, mastered to perfection and demonstrating exceptional skills and a deep knowledge of the very best produce,” Ellis said when the 2016 Michelin Guide was released. “Each of Christian Le Squer’s dishes is a true work of art, a shining example of the best of French gastronomy.” Prior to racking up stars at Le Cinq in 2016, Le Squer enjoyed 12 consecutive years of three-star glory at Pavilion Ledoyen.

In one respect Frédéric Anton, one of France’s most admired chefs, is an utter failure: As a child he aspired to become a cabinetmaker. Alas, his cabinet-making dreams were put on hold when he began his career as a chef in 1983, and further left in the dust when he proceeded to cook under some of fine-dining’s biggest names—including serving as Joël Robuchon’s chef de cuisine. Anton’s impressive pedigree eventually landed him at Le Pré Catelan in 1997, where he earned two Michelin stars by 1999 and was elevated to a third in 2007.

Credited with pioneering the French fusion movement, Pierre Gagnaire’s philosophy in the kitchen is, “tourné vers demain mais soucieux d’hier”—or “facing tomorrow, but respectful of yesterday.”  His own culinary past is a mix of formal training and familial connections. Pierre Gagnaire learned the ropes from his Michelin-star-winning chef father, as well as in the kitchens of the highest caliber French chefs of the era, including Paul Bocuse. Gagnaire took these lessons and started his own restaurant in his hometown of Saint Etienne in 1980, which received three Michelin stars in 1993, but struggled financially. Then, in 1996, Gagnaire opened his eponymous establishment. By 1998 he had his three Michelin stars again.