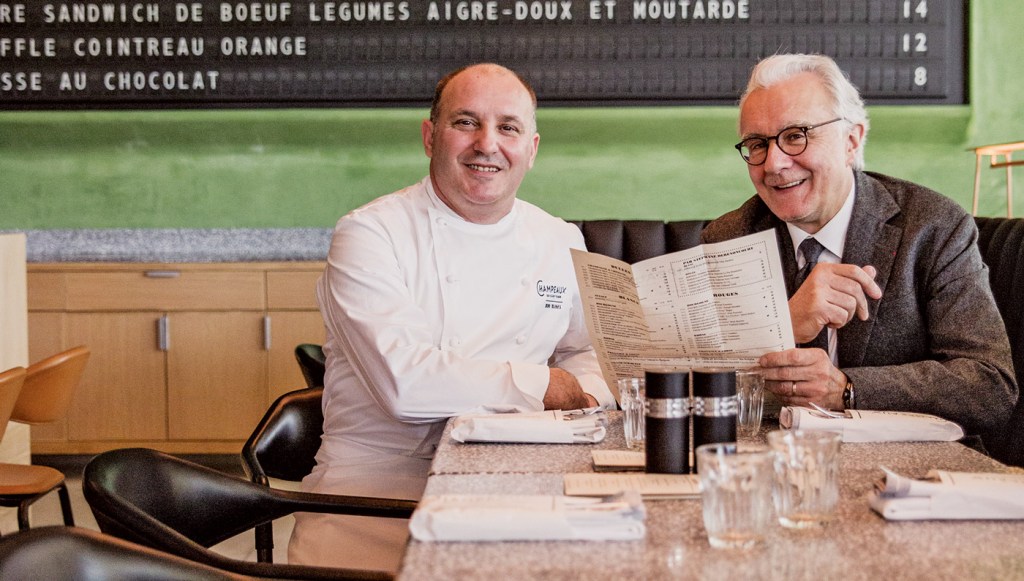 In the hands of top chefs in Paris, a culinary tradition rises again.

After 150 years as a fixture in the Parisian culinary landscape, brasseries are joining the ranks of the city’s most exciting restaurants. Eric Frechon, who holds three Michelin stars at Epicure at Le Bristol Paris, started the trend in 2011, when he revived Le Mini Palais, a beautiful brasserie inside the Grand Palais. Most recently, the gastronomic titan Alain Ducasse cut the ribbon at Champeaux, a striking new brasserie in the Forum des Halles; and this fall, Thierry Marx, who helms the Michelin two-star Sur Mesure in the Mandarin Oriental, will unveil his brasserie at the Gare du Nord train station.

“I wanted to do a contemporary brasserie that would serve a diverse clientele, everyone from the big boss to his secretary, and to create a place where people meet each other, both by design and by chance,” says Ducasse of his loftlike new space. “Brasseries are different from regular restaurants because they serve nonstop and, in the best Gallic tradition, make good food widely available to all pocketbooks.”

Brasseries were invented in Paris during the 19th century to serve a new class of restaurant-goer created by industrialization and rail travel. Some of the first—notably Bofinger, which opened in 1864—are still serving today. But brasseries really took off after 1870, when the Franco-Prussian War brought Alsatians and their culinary traditions to the French capital. Choucroute garnie (sauerkraut garnished with sausages and cuts of pork) became a staple on brasserie menus, which also featured oysters shucked at stands out front and simple dishes such as roast chicken and steak tartare.

To modernize the food, Ducasse created a set of savory and sweet soufflés as the centerpiece of his menu. Their lightness conveys the move to healthier eating in France, as do many of his other dishes, including a salad of raw and cooked vegetables with herbal pesto. Champeaux, which was designed by the architectural collective Ciguë, also offers heartier fare—but the menu’s carefully calculated modernity says a lot about contemporary French cooking, and the same is true at Frechon’s two brasseries.

At Frechon’s newest—Lazare, in the busy Gare Saint-Lazare train station—the plat du jour ranges from quenelles in crayfish sauce to an irresistible saucisse de Toulouse served with gravy-lashed potato puree. Other standouts include shrimp-and-vegetable beignets with ginger-coriander ketchup and a sublime baked-to-order apple tart. Frechon’s other brasserie, Le Mini Palais, draws a stylish crowd with witty decor by Patrick Gilles and Dorothée Boissier and contemporary dishes such as watercress soup with smoked-herring foam. “The brasserie,” Frechon declares, “makes as much sense today as it did when it was first invented.”

Count Marx among those who agree: His brasserie L’Étoile du Nord is designed to feed 600 people a day.