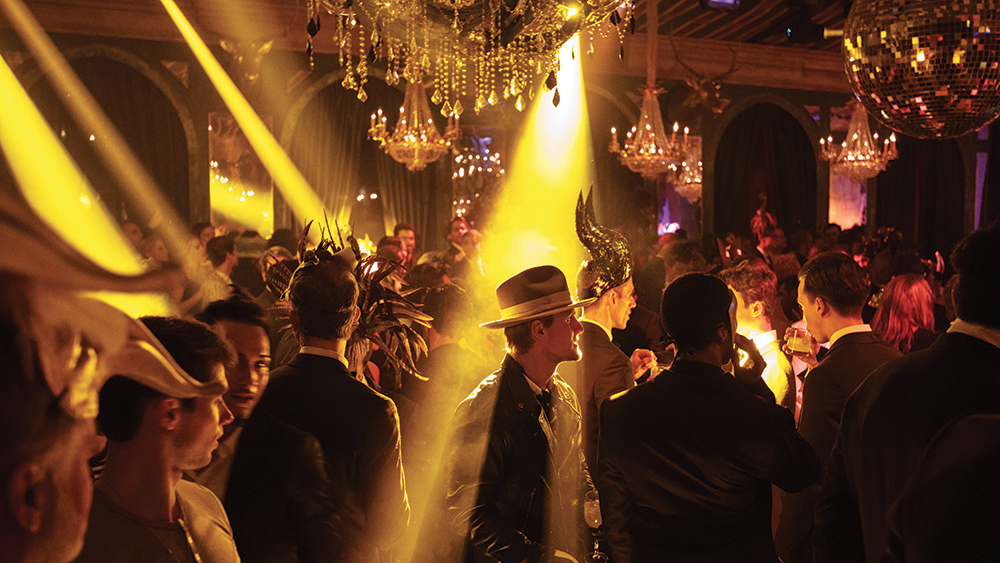 The single most welcoming thing you can do at the start of the party is to stand near the entrance when your guests arrive so they can see you. In December 2018, fashion designer Tory Burch married businessman Pierre-Yves Roussel in Antigua. On the night we all arrived on the island, they gave a welcome party to open the weekend. Tory was standing right there at the entrance when I walked in, radiant, eyes sparkling, glowing with warmth. It made me feel like she’d come out especially to greet me. Once your guests know you care, you’ve got them. Never forget, though: True welcome is about displaying warmth, not wealth, so don’t ever compromise the former for the sake of the latter.

Dress has meaning. We send signals about who we are and how we want to be seen—by friends, by enemies, by potential mates.

Just as the garb of a guest conveys cues about who he is, when a host calls for a certain type of dress, he’s conveying an important message of his own about the type of party he wants to have. Unfortunately, it’s a message in code. And today, when so many rules have broken down, as a guest it’s easy to get confused.

There’s white tie: formerly never worn before eight o’clock and now almost never worn at all. It includes a dress (or tail) coat. As a casual alternative to white tie, black tie was originally considered informal wear for occasions beginning after six in the evening. In our more relativistic age, black tie is formal, but the time stipulation still applies.

For women, white tie means long dresses, and black means nothing shorter than mid-calf. I’m sorry, ladies, but cocktail dresses are not suitable for black-tie events.

If that sounds like a lot, get ready. Because while white and black tie are pretty straightforward, everything else makes no sense at all. Formal usually means black tie in the city but a suit everywhere else. Semiformal can mean a suit but more often means coat and tie for men and mid-length dresses for women. Cocktail is coat and tie, or a jacket, no tie, or anything dressier than your pajamas. Women can wear practically anything except sweatpants. The worst of both worlds is black-tie optional. Half the crowd is guaranteed to feel overdressed and the other half outdone.

A host can never go wrong by bringing it back to the guests. Remember whom the dress code is for. You’ll always have guests who rely on fashion to make a statement. They’re going to be fine no matter what. There’s also the guest for whom any amount of sartorial advice is a pain in the ass. Don’t waste your time worrying about him.

In a moment of self-awareness more likely intended as false modesty, the Duchess of Windsor once said, “I’m not a beautiful woman. I’m nothing to look at, so the only thing I can do is dress better than anyone else.” She’s actually speaking for the vast, silent majority: those who aren’t good-looking enough for their clothes to be irrelevant but who are perfectly capable of looking reasonably attractive with a little effort. I put myself in that category. Effort is attractive, and a lack of it is not, as Karl Lagerfeld noted: “Sweatpants are a sign of defeat. You lost control of your life so you bought some sweatpants.” Never be the guest who shows up in sweatpants.

On Being a Good Guest

Your first responsibility as a guest is to reply. Think about it. Someone is offering to provide you with free food and drink and deal with music, the location, the atmosphere and, most importantly, the cost. Don’t you at least owe them a response? When you receive an invitation, it’s your job to be proactive. Sort your life out, and let the host know whether you’re in or out.

Good guests get invited back because they make it easy for a host.

Never complain about the food. Remember, you could always be home alone, eating leftovers. And never, ever, ever move your place card.

Put down your phone. Be present. Don’t get drunk. No one’s bad news lifts up a party, so spare the room.

Pick out the biggest loser in the room, the one no one’s talking to, and go spend five minutes making his night better. He’s there for a reason, and your host will be grateful. If you can’t figure out who the biggest loser is, you need to upgrade your life in ways that this article can’t achieve.

The greatest gift you can give a host is to arrive 15 (but never more than 30) minutes late. Earlier than this, and you’re not giving your host any margin for error. Trust me, even the best host finds that grace period beyond priceless.