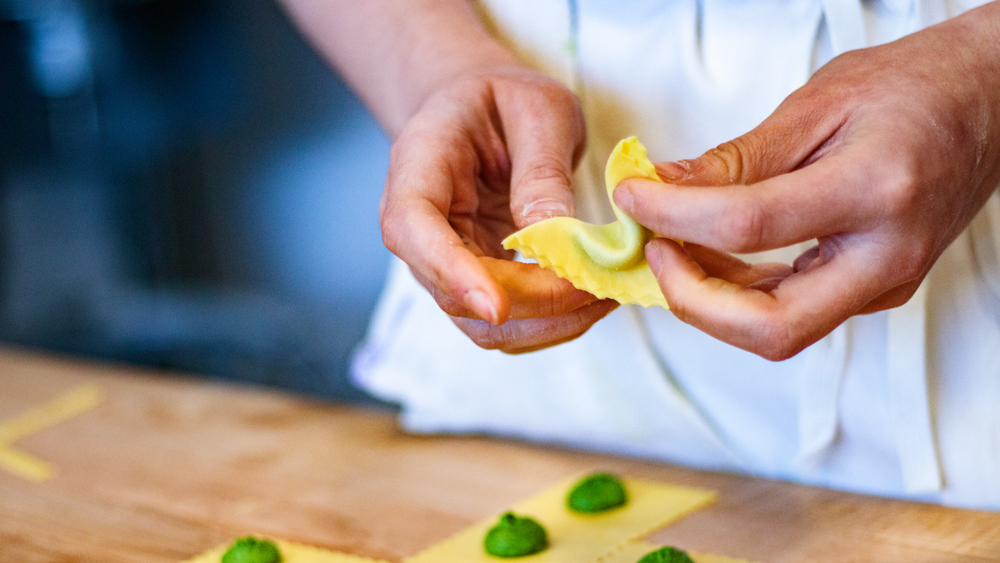 I’ve never been a fan of rules. If I were, I probably wouldn’t have ended up in this career. But in pasta cooking, there are several I consider indisputable and essential—rules so easy to follow, so logical, even I don’t mind living by them.

Do not put oil in the water

I wish I could go back in time and reprimand the first person who put this advice to writing. Please do not do this. You want your pasta to absorb the sauce; adding oil pitches a barrier that prevents that from happening.

The precise ratio of salt to water is 2 tbsp. salt for every quart of water. But if you, like me, are not inclined to measure it out when you’re cooking, just remember not to skimp. Add enough salt so the amount makes you just slightly uncomfortable. Taste it, and if you can bear to swallow a spoonful down, add some more.

Mind the temperature of your water

While most pastas should be dropped into a hard boil (do not turn the temp down once it’s in), filled pastas, especially those with delicate fillings that can curdle, such as ones based on ricotta, mascarpone, or other soft cheeses, should go into water that’s at a gentle boil. A hard boil also runs the risk of popping filled pastas open in the water since, if made correctly, they will be quite fragile.

The back of your standard-issue pasta box will tell you to boil dried pasta for between 8 and 11 minutes, but my advice is always to take what is on the box and subtract 2 minutes. And for my extruded pasta, I recommend between 5 and 8 minutes. What most home cooks forget is that you will continue to cook your pasta in the pan, so you want to be sure that you’re removing it from the pot on the very al dente end of al dente. (For fresh pasta, it’s a bit different; cook times vary by shape, but you’re generally only boiling it for 1 to 4 minutes, until it just begins to soften.)

Do not drain your pasta

You want to remove it from the water with a pasta basket, spider, or tongs, so some of the water goes into your sauce-filled pan with the pasta itself. The reserved pasta water is also important, as it plays a multipurpose role in emulsifying, loosening, and/or seasoning your sauce.

While pasta cooking water is called for as a component of nearly every sauce in this book, you need to mind your salt levels. If you’re working with a sauce that is based on ingredients with a high level of salinity, such as anchovies or cured meats, alternate the use of pasta cooking water and fresh hot water during the marriage.

Do not put too much sauce in the pan

One of the most common mistakes that home cooks make is adding the pasta to the full volume of sauce they have prepared. Each recipe calls for a specific volume of sauce to be added to the pan that you’ll use to marry your pasta. Remember that if the sauce seems scant at first, you’ll be adding pasta water to it, increasing its volume, and that your sauce should coat the pasta, not smother it. You can always add a bit more sauce if needed, but it’s much harder to subtract. (Note, too, that the recipes will often yield excess sauce because they are best made at a specific volume, and because they are labor intensive. Refrigerate the surplus for later in the week or freeze it for a future dinner. Whoever complained about too much leftover bolognese?)

The inclination among many cooks is to turn off the heat under the pan when they marry their pasta and sauce. Do not. Keep your sauce on low to begin and turn it up to medium or medium-high when you’re ready to add the pasta. Marrying the pasta at a higher temp speeds up the process without overcooking the pasta.

You have to be constantly moving the pasta while it’s marrying. If you have more than two servings in the pan, use tongs to keep the pasta flowing around the pan in a constant motion, gently picking it up and turning it over to coat.

Don’t add cheese until the end

If you add cheese too early and over heat, it doesn’t absorb properly. Instead, it will clump up and distribute unevenly. When the sauce and pasta are almost fully married, take the pan off the heat and add the cheese slowly, toss a few times to integrate, and serve.

Missy Robbins is the award-winning chef behind the hit restaurants Lilia and Misi in Brooklyn. The above article was reprinted with permission from Pasta: The Spirit and Craft of Italy’s Greatest Food by Missy Robbins and Talia Baiocchi, copyright © 2021. Published by Ten Speed Press, an imprint of Penguin Random House.