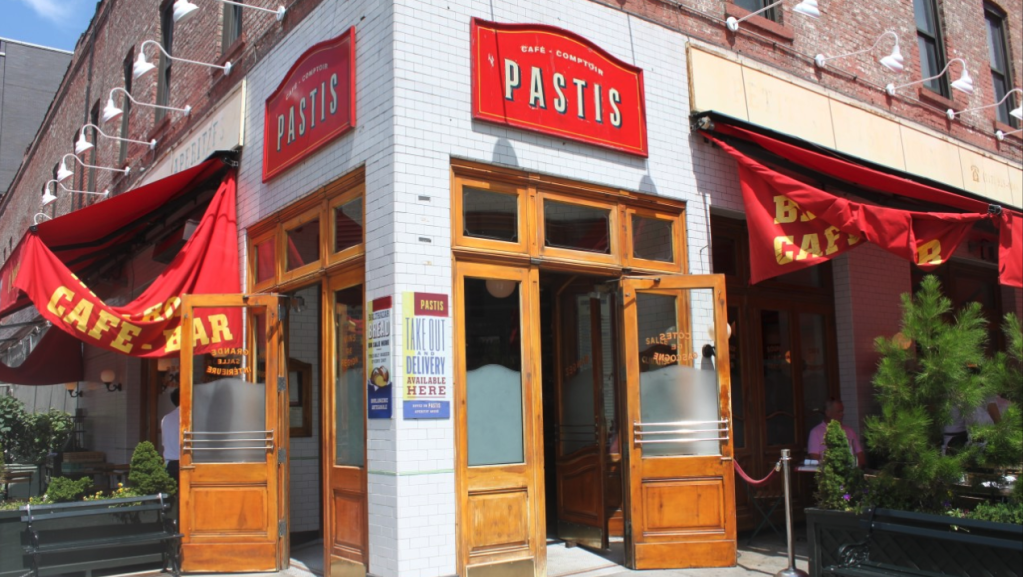 For a long time, the best restaurants in New York were in Midtown, and there wasn’t much reason to venture downtown. As Jay McInerney wrote in Bright Lights, Big City, “His friends are all rich and spoiled, like the cousin from Memphis you met earlier in the evening who would not accompany you below Fourteenth Street because, he said, he didn’t have a lowlife visa.” Eventually, venturing to Lower Manhattan had no such hang-ups, even for the well-heeled set.

Though many factors conspired to create Lower Manhattan’s gravitational pull, restaurateur Keith McNally undoubtedly played a role in bringing it about. His restaurant Odeon fittingly adorns the cover of McInerney’s 1984 novel, but he didn’t stop there. He’s been opening New York icons for decades—from Balthazar, Minetta Tavern, to the dearly departed Schiller’s, to the recently opened Augustine, to of course, Pastis.

Even 15 years after Bright Lights, Big City some sections of Downtown still remained a little seedy, like the Meatpacking District where McNally opened his French brasserie Pastis in 1999. Those who worked there in the early days recount showing up early in the morning for a shift to walk past prostitutes finishing their respective shifts. Pastis helped transform the neighborhood into the scene-y place it became replete with models and celebs. As what happens with many New York neighborhoods, those who bring about change, eventually become casualties of it. Pastis closed in 2014. McNally vowed to reopen and now in 2018, he’s partnering with restaurateur Stephen Starr of Le Coucou, Upland, Buddakan, and more.

The origins of this unlikely partnership came about have been detailed in Eater New York. More than a year ago, McNally suffered a stroke, causing his investors to back out of the project. McNally’s son Harry read a statement on behalf of his father at a community board meeting to gain liquor license approval for the new Pastis, detailing the difficulties and delays for the project that was originally announced in 2015.

Starr stepped in to help with funding and his restaurant group will run Pastis day-to-day, helping bring back to life the restaurant that brought the Meatpacking District to life.

“It will feel like Pastis, and we hope to make what was already excellent even better,” Starr told the New York Times. “We’ll keep Keith’s spirit and vision.”