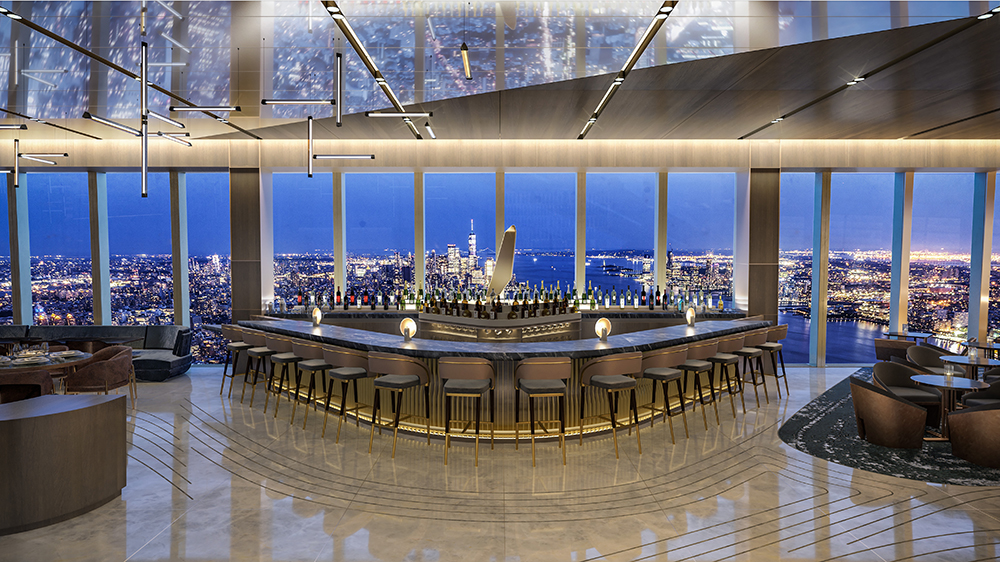 We’re already a little spoiled for choice when it comes to dining at Hudson Yards. The $25 billion mall on Manhattan’s far west side boasts a ton of intriguing eateries from lauded chefs, such as Thomas Keller, David Chang and Ferran and Albert Adrià. But one new restaurant will soon tower above them all—literally.

The aptly named Peak will sit at the summit of the tallest skyscraper within the development, occupying the entire 101st floor of 30 Hudson Yards. Designed by renowned architect David Rockwell, the multipurpose venue—which will encompass a 110-seat dining room, a 45-seat cocktail bar, a private dining room and event space to accommodate 300—is slated to open in March, alongside what is being touted as the highest observation deck in the Western hemisphere.

This 7,500-square foot platform known as Edge juts off the 100th floor roughly 1,131 above the ground and affords unparalleled views of the city skyline. Edge will have its own Champagne bar—you can sit either indoors or outdoors and you’ll need that Dutch courage, trust us—but patrons will need to venture upstairs to Peak for a proper meal.

So, what’s on the menu? Helmed by executive chef Chris Cryer (ex-Seamore’s), Peak’s modern American menu will be influenced by the chef’s long-standing relationships with local fishermen, farmers and purveyors, as well as his personal commitment to sustainability. In addition to chef cryer, Peak has assembled a team hospitality heavyweights, including general manager Chris Nelson (previously at Union Square Cafe) and beverage director Zack Kameron (formerly head sommelier at now-closed A Voce Columbus).

London-based hospitality group Rhubarb will oversee Peak and the champagne bar at Edge. The group also operates Wild Ink, which is just a stone’s throw away in the shops at Hudson Yards.

The restaurant is not taking reservations just yet, but tickets to the Edge for March 2020 are now available via the website ($36).

Check out more pictures of the interior of the restaurant below: