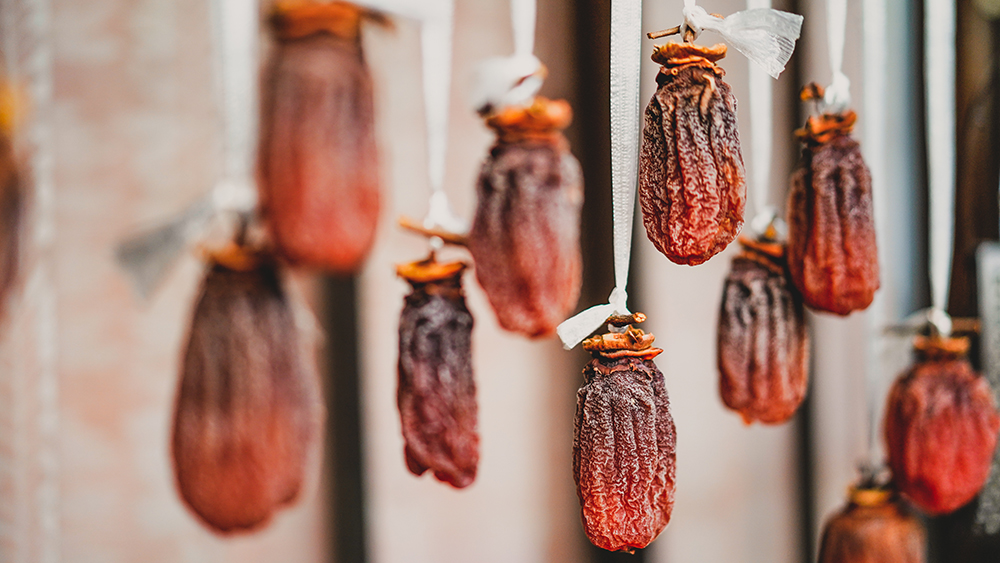 If you’re one of those people whose Instagram is filled with an endless stream of food, you’ve probably noticed a rotund orange fruit has been flooding your feed. No, it’s not a mini pumpkin—though the Thanksgiving staple shares a similar hue—it’s a persimmon. A handful of high-end chefs have started stringing the fruit up in their restaurants in order to create a coveted Japanese delicacy—and now they’re posting their creations to Instagram for all to see.

Hoshigaki is essentially dried persimmon, which has been made in Japan for centuries. The ancient practice grew out of a need to preserve fruit for the winter. And despite being a colossal time-suck—the painstaking process takes at least six weeks—hoshigaki has lingered on due to its super sweet payoff: Once dried, the permission has a delightful honey cinnamon flavor, jammy dried-fruit consistency, and can fetch up to $50 a pound.

The first hoshigaki surfaced Stateside in the 19th century after Japanese immigrants brought the delicacy to California’s Sierra foothills and San Joaquin Valley. Following a brief hiatus during World War II—which was brought on by Japan’s low fruit supplies—the practice has experienced a small renaissance. Over the past 20 years, more and more of the country’s culinary pioneers have started to experiment with the complex orange fruit.

Award-winning chef Edouardo Jordan (Salare, JuneBaby and Lucinda Grain Bar)—who has been making hoshigaki for four years now—says he was inspired to tackle the delicacy after visiting the Cultured Pickle Shop in San Francisco. Here, co-owner Hozven Farley introduced the chef to the dried permission project she was working on and thus kick-started the chef’s enduring love affair with the saccharine delight.

Jordan says the multi-step hoshigaki process isn’t particularly difficult but requires patience above all else. First, the high-maintenance fruit has to be peeled, air-dried and strung-up which Jordan deems “the most labor-intensive part of the project.” Then, once a day—or every few days, depending on the chef—each individual persimmon must be hand-massaged in order to break down the hard pulp, remove internal air pockets and encourage natural sugars to come to the surface.

We are getting our hoshigaki on with some hachiya permissions. Can’t wait for these puppies to finish and see how we use them. • • • #salareseattle #bedifferent #food #foodandwine #seattle #washington #love #instafood #instagood #me #tbt #follow #followme #photooftheday #cute #happy #art #photography #cheflife #fruit #hoshigaki #persimmon

“Also, having the right environment is key… not too dry and not too wet,” Jordan adds. Humidity helps the sugars to bloom and produces a white, crystalline powder—it kind of looks like mold, but that’s a good thing—which will grow over the following weeks as the fruit underneath becomes dark and firm.

If that’s not demanding enough, you must pick the correct type of fruit. The variety traditionally used for hoshigaki is called hachiya. Andy Doubrava of LA’s Michelin-starred Rustic Canyon—who is in his first year of making hoshigaki—says these permissions are “absolutely disgusting and astringent until they reach the point of being so ripe that they’re ready to burst.”

Doubrava has been itching to try his hand at hoshigaki for some time now, spurred on by jealousy—seeing other chef’s permission-filled dining rooms—and aesthetic beauty. “It’s beautiful. Your guests at the restaurant are going to be wowed.”

The chef had to work on fostering relationships with persimmon farmers “to convince them to spend the extra time it takes to cut them off of the tree the way I needed them.” That is, with two inches of the stem remaining. Doubrava finally received a helping hand from Karen Beverlin of Freshpoint Produce—who is the connective tissue between farmers and chefs in LA—and Steven Murray of  Murray Family Farms and was able to acquire “100 beautiful hachiyas with the stem left on.”

While Doubrava is not yet sure how he will incorporate hoshigaki into Rustic Canyon’s ever-changing farm-to-table menu, Jordan puts his own spin on persimmon by pairing it with beef tartare and charcuterie platters. “We also grate them like cheese over dishes and massage them into sauces,” he adds.

Hachiya persimmons drying to later become hoshigaki. Overtime they will shrivel and a natural sugar coating will form on their surface.

Indeed, persimmon is popping up all over the place and being used in extremely interesting ways. Acclaimed chef Laurent Gras is embarking on his own permission project at Michelin two-star Saison in San Francisco. The chef plans to serve the delicacy—which he says “feels almost like a pâte de fruit”—with a fresh persimmon sauce and a sour cream ice cream. Meanwhile, a stone’s throw away in San Diego, Addison—the first and only Michelin-starred restaurant in the area—is about to introduce a cocktail menu dedicated to the fruit.

There’s a good chance you’ll stumble across hoshigaki on your next dinner out, but if you’re curious you can order a pound of dried persimmon from Otow Orchard or Penryn Orchard at a cost of $50 or $52, respectively. Alternatively, you can start your very own persimmon project, following a step-by-step guide online. Just a final piece of parting advice from Jordan, “Do not make the mistake of eating an unripe persimmon!”