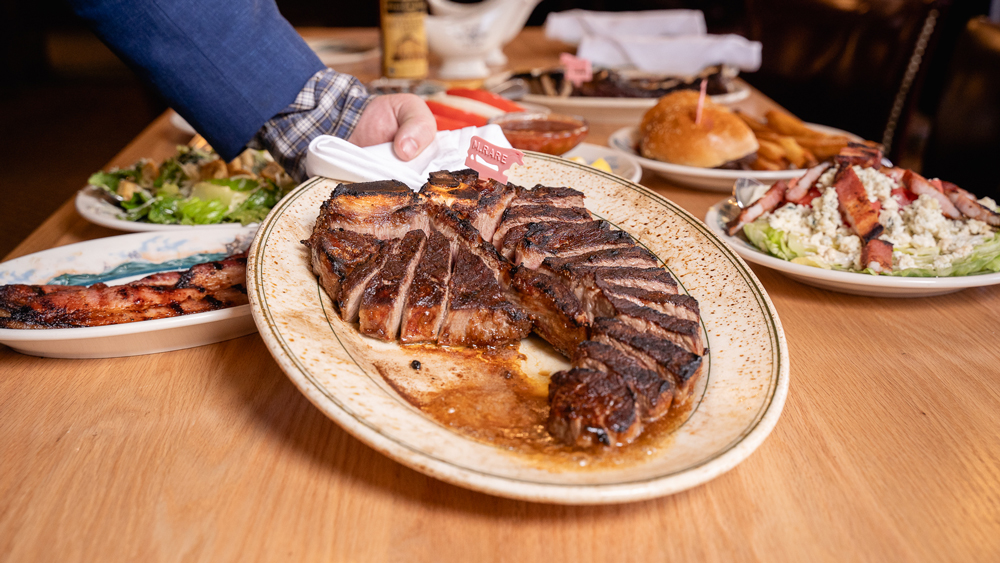 Like countless legends before it, Peter Luger is getting ready to open in Vegas. The 135-year-old Brooklyn steakhouse announced that it will build its first new American outpost in more than 60 years, landing inside Caesars Palace on the Strip.

Don’t expect Lugers to go all Vegas on us though; waiters won’t be in sequined white jump suits or performing illusions for patrons, sadly—they’ll still sport their bow ties and gruff demeanors. Instead the company wants to recreate its old school Brooklyn vibe in Sin City. Which will include a dry-aged porterhouse for two served by a waiter spooning sizzling butter and beef fat over the top of it tableside.

“It was critical for us to be able to bring to Las Vegas the same menu, the same ambiance and—most important—the same quality beef that we are known for in New York, and Caesars was aligned with that vision,” Amy Rubenstein, the President of Peter Luger, said in a statement announcing the partnership.

Not everyone is a fan of that service, with New York Times restaurant critic Pete Wells knocking the venerated restaurant down to zero stars. “The servers, who once were charmingly brusque, now give the strong impression that these endless demands for food and drink are all that’s standing between them and a hard-earned nap,” Wells wrote back in 2019.

Of course, that didn’t sway hardcore Luger fans like Billions co-creator Brian Koppelman, who defended the steakhouse both on his podcast and on Twitter against Wells’ review.

And the review hasn’t slowed them down (unlike the pandemic, which has slowed everyone down). After standing pat for decades, Peter Luger is in a bit of an expansion mode. The announcement of Vegas comes just months after they opened their first restaurant outside of America with a three-story outpost in Tokyo.

Like in New York, Luger will find hot steakhouse competition in Vegas with new spots including Carversteak, Harlo and Barry’s attracting meat lovers both on and off the Strip. The Michelin-starred restaurant is hoping it can pack people in just like it does back home in Brooklyn when it at Caesars arrives in late 2022.