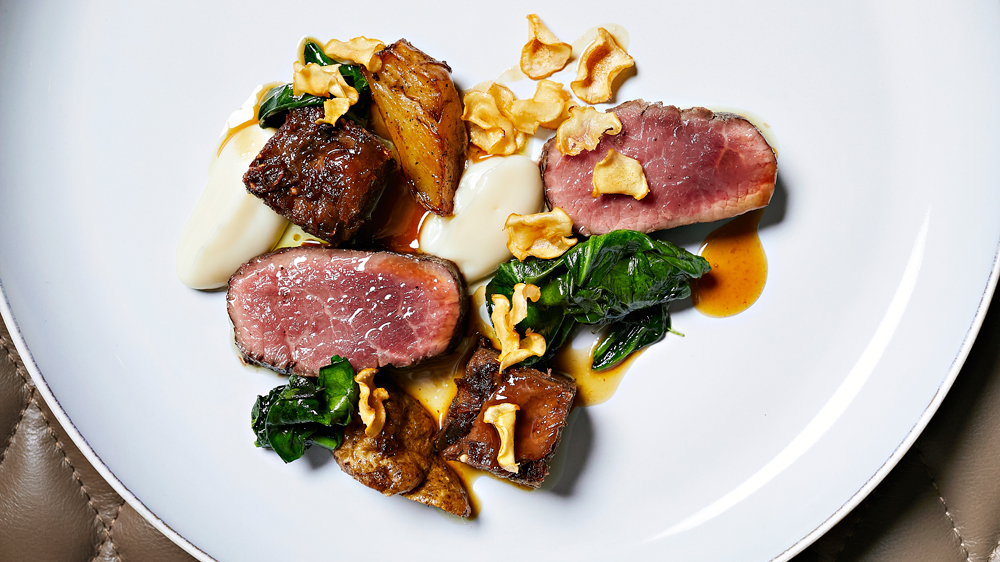 When chef Nicholas Stefanelli traveled to Greece recently to visit his ancestors’ birthplace, he was surprised by what he found—the old homestead was no longer in Greece.

“My family is from an area in the Black Sea that is Turkey now,” he said, referring to the border changes that happened in the 1920s. “Exploring the historical piece of my Greek side has been very eye-opening for me. As I’m traveling through Northern Greece, it just became evident there’s a lot to tell here. I’ve been going through, digging in, figuring out how the diaspora of food flowed around ancient times and got to where we are today.”

This startling geopolitical education is what Stefanelli, the Michelin-starred chef and restaurateur behind Washington, DC’s Italian restaurant Masseria, wants to bring to his new Greek restaurant, Philotimo, opening January 22 in Midtown Center.

To do so, Stefanelli, who is half Greek and half Italian, traveled extensively through the country, making connections with modern-day purveyors, and researched Ancient Greek foodways to find the roots of the country’s multi-cultural, regional dishes. Take pasta, for example. At certain points in time, Sicily and Puglia were part of Greece, while Corfu and Crete were part of the Venetian Empire. This is why pasta, like kritharaki or orzo, became integrated into Greek cuisine.

“We’re really wanting to tell that story of food and wine, and really show how much complexity there is as you move throughout the region,” he said. “It’s part of our process to open people’s eyes to the depth and diversity of things that they might not necessarily see.”

And at Philotimo—a word that does not have a direct translation, but is the pride one gets in providing hospitality—Stefanelli is letting diners be in charge of the roadmap. The Maryland-born chef, who trained under Thomas Keller (The French Laundry), Roberto Donna (Galileo), Fabio Trabocchi (Maestro) and Ashok Bajaj (Bibiana), is handling the bookends of the journey.

To start the meal, diners are provided with a selection of mezze dishes like savory loukoumades, or Greek donut holes, filled with taramasalata (fish roe dip) and topped with golden osetra caviar. There will also be traditional stuffed grape leaves (dolmades) and sesame bread rings (koulori); plus a rustic sourdough loaf dotted with roasted carob, the chocolatey plant often eaten during times of famine; and a cauliflower croquette (pseftokeftedes) topped with mint, dill and kasseri cheese.

Then diners may select their next three courses—pasta, vegetables, fish or meat. (If they want three meat courses, they can have three meat courses.) Expect hand-rolled barley pasta (skioufihta) with lamb broth and mizithra cheese, which is found in Crete; seashell-shaped gogges pasta that is seen in Corfu and Puglia; and Middle Eastern manti dumplings that recall the Black Sea border movements, which are stuffed with veal and topped with brown butter and optional black truffles.

Many vegetables and meats are cooked on the hearth or confited in olive oil—a Greek staple traced to the ancient olive trees on Mount Taygetos—as opposed to animal fat or butter. Agginares a la polita, or artichokes braised with root vegetables and dill, is a dish often seen during the fasting season of Lent. Wild mushrooms, found in the winter months in the north, are roasted and served with olives, oregano and feta (manitaria). Onions (as opposed to summertime peppers) are stuffed with rice and baked.

“We’re pulling from some of these cooking techniques and applying it to new ingredients that are in the realm of Greek gastronomy, but [the combination] is not necessarily thought of because it’s out of the traditional seasonality of it,” he said. “We keep the heart and soul of the dish, but have fun with the presentation and ingredients.”

A traditional porridge used to break fast on Easter is the inspiration for the pitsouni magiritsa presentation, which features squab two ways, served in and with a congee-like rice soup. Sinagride plaki features baked Madai snapper with tomatoes and capers. And for the arnaki lemonato, they slow-cook Shenandoah Valley lamb with spinach and sunchokes.

Lastly, diners are provided with a selection of petit fours-like desserts found at traditional pastry shops like mixed-nut gastrin, the original baklava, made with honey, molasses and phylo dough; a rolled wafer stuffed with chocolate that resembles a cigarette; cinnamon walnut cake (karidopita) topped with Mastic ice cream; and an assortment of cheeses.

The meal can be paired with solely Greek wines or wines pulled from all over the world, from regions the Greek Empire once touched like Georgia.

“A lot of people are uncomfortable with all the [Greek] grapes and the pronunciations,” he said. “The pairing program allows us to open those doors up and help people walk through. You get to experience different styles of wine, different grapes that you might not have been accustomed to or have seen before. And [for the international bottles] we’re having some fun with how the land, the footprint of Greece, has expanded and contracted and where they’ve had influence.”

In fact, Stefanelli has big plans for the beverage side of Philotimo. The restaurant will have 4,000 bottles in its cellar, mostly from Greece, and about 800 on its list. Stefanelli is so invested in Greek wine’s past, present and future that he’s launching an aging program that he hopes will permanently alter how it’s viewed all over the world.

“There’s this evolution that’s happening in Greek wine. It’s almost like it’s in an infancy stage, even though they’ve been making wine for so long. It’s kind of how Sicily was 15 years ago. You have these young winemakers who are coming in and taking over some of their families’ vineyards, and they’re going and working in different places like Burgundy and seeing the different techniques and bringing them back and applying them to Greek grapes. There’s so much potential that I feel is untapped.”

The chef collaborated with design studio Group 7 on the layout of the restaurant, which showcases a hearth, white sandstone entryway, hand-woven rope chandeliers and seating in the dining room, at the bar, at a chef’s counter and even inside the kitchen at a private table where the meal is decided at the whims of the chef.

Stefanelli also owns the Italian trattoria and market Officina and Ancient Foods, an online purveyor of olive oils, honeys, herbs, olives and teas sourced from Greek artisans. In the spring, he will open a companion café to Philotimo, which will serve Greek street foods, coffees and wines.