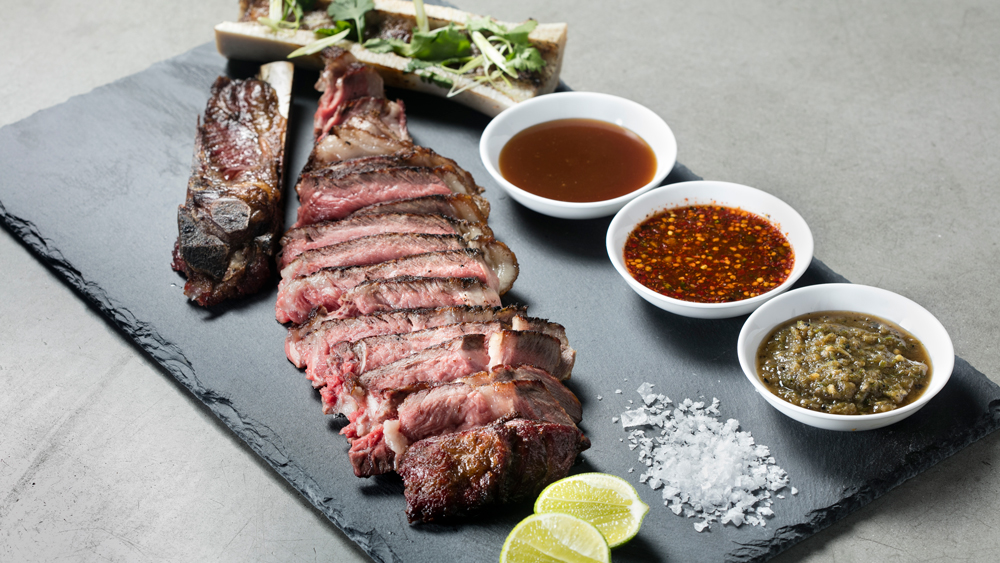 Last year chef Leah Cohen was feeling a bit constrained. Her restaurant on the Lower East Side, Pig & Khao, has been a hit since 2012, but the menu is exclusively Southeast Asian. There, diners keep coming back for her Thai and Filipino dishes—like khao soi and sizzling sisig with pork head—but Cohen was itching to expand her culinary borders.

So last fall (when she was eight months pregnant) she began work on her second New York restaurant, Piggyback NYC, which opened last week on the border of Chelsea. It’s a playful look at all the flavors of Asia, in street food and bar food forms; she’s spent years visiting the region with her business partner and husband, Ben Byruch.

“The menu has given Leah a little bit more free reign,” Byruch said. “When we travel and stop in Hong Kong or stop in Japan and eat delicious things, she can’t really bring them back and put them on the menu at Pig & Khao. So here Leah just cooks Asian. We kind of throw a broad net over it.”

Cohen, who also had a stint of Bravo’s Top Chef, has filled the menu with some familiar standards, like Malaysian curry puffs with cucumber relish; Indonesia lamb rendang with roti; Chinese salt and pepper shrimp with Kewpie-lime mayo; Japanese charred edamame with yuzu butter; and Korean double-fried chicken wings with honey butter-gochujang sauce.

Other dishes are her unique creations, like the pho French dip: stir-fried cheesesteak meat that’s dipped in pho broth and stuffed in a hoagie roll with French onion spread, jalapeños, Thai basil and provolone cheese. There’s also “okie toast,” which is a mix between Chinese shrimp toast and the Japanese savory pancake, okonomiyaki; a mapo (Chinese spicy bean and five-spice sauce) chili dog; and a Southern curry fried chicken sandwich with pickled daikon and smoked aioli.

“There is a little crossover because that’s what I do, but I didn’t want to limit myself,” Cohen said. “Moving forward it just gives me a lot more freedom, an opportunity at both restaurants. Like this summer, Ben and I are going to the Philippines and Korea, and it’ll be great because I’m sure I’ll eat something in the Philippines that will inspire me and I can put that on the menu at Pig & Khao, and then I’m sure I’m going to want to put like 20 Korean items on the menu at Piggyback. [Laughs.]”

Byruch was the driving force behind the construction and design of the restaurant, which seats 100. The look has a 1970s, pan-Asian feel.

“In the same way that food can give you an opportunity to experience traveling without leaving the city, I wanted to showcase some of my favorite things from Asia,” he said.

There are original exposed brick walls, a tin ceiling and skylights. The entrance to the restaurant has a mural depicting lively, neon-lit city streets in Hong Kong and Bangkok. The back section is wallpapered with Asian-American newspapers, movie posters and vintage ads.

The duo had launched their Piggyback concept before, in Jersey City in 2017, but were unhappy with the direction the restaurant ended up taking. They closed it in September.

Cohen says the New York restaurant has been packed in its opening week, both from regulars of hers at Pig & Khao, who are familiar with her technique and flavors, and people wandering in off the street in bustling Midtown. Cohen had actually lived in that area a decade ago, for almost 10 years. Back then, her dining options were limited to Koreatown (not that she complained).

“We weren’t really sure [about this location] originally,” Byruch said. “Then we came to the neighborhood and saw how much it has changed and is growing to be more than just the fare of Penn Station and Madison Square Garden. But we also felt from a food and beverage standpoint, the neighborhood is a little underserved.”

Piggyback NYC will open soon for lunch and brunch. Some of the sandwich and salad options will only come available then.

An adjacent bar with a separate entrance, Wayback Bar, will also open soon. It resembles a 1960s grandma’s basement, with rotary phones and a wood-paneled bar, and some décor to make you feel like you’ve stepped outside, like a street-level billboard, greenery and vintage speakers on the walls. It is currently available to reserve for private events.

Piggyback NYC is open 5 p.m. to 11 p.m. Sunday through Thursday, and 5 p.m. to midnight on Fridays and Saturdays. Lunch and brunch hours are coming soon.