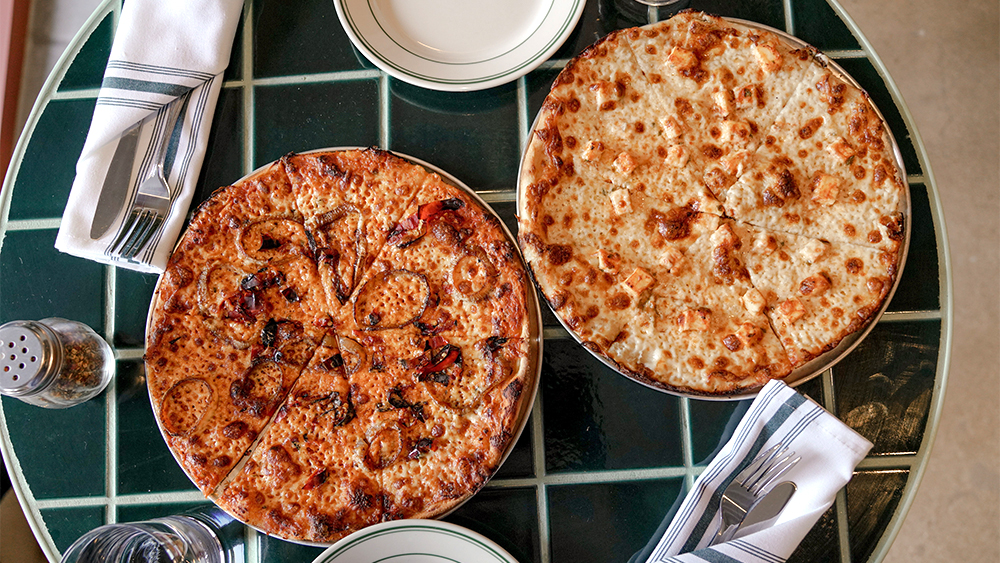 The genre-bending cuisine at Avish Naran’s Pijja Palace could be described as a one-of-kind Los Angeles experience—a curio without precedent. Naran doesn’t see his restaurant that way. Though he’s serving Indian-Italian-American pizzas and pastas, to him, Pijja Palace has parallels with other places around town he admires.

“I don’t think my story is too different from restaurants like Anajak and Yangban Society,” says the 30-year-old Naran, who opened Pijja Palace in the city’s Silver Lake neighborhood in May. “I think a lot of us are just, like, ethnic kids who want to cook through our experiences. I think it’s a good time to just be fun. We make food here that is thoughtful, but I don’t want people to come in here and overthink.”

Naran and executive chef Miles Shorey (who previously cooked at Roberta’s LA outpost) are having loads of fun coloring outside the lines and creating crowd-pleasing dishes like malai rigatoni.

“We built it like a pink sauce, but the spices in there are something you would find in a tikka masala: coriander, cumin, our own special garam masala blend, ginger, garlic paste, things like that to make it really feel Indian,” Naran says. “I don’t know if I set out to be uncompromising, but we definitely are, now that I look back at it. We don’t tame down the spice for anybody.”

Pizzas also feel Indian with toppings like housemade Goan sausage, chicken tikka and kadai paneer. Pizza sauces include a peri peri vindaloo sauce that obviously showcases Indian flavors but is also sort of built like an enchilada sauce, with a roux involved.

“Growing up in LA, you notice there’s a lot of similarities between a lot of different cuisines,” Naran says. “Everything we’re seeing today is completely organic. Like, nothing’s a fusion, everybody’s just doing what they grew up with. I think LA is such a huge cultural hub, with a history of great casual restaurants.”

Naran, who was raised in Echo Park not far from Pijja Palace, knows that a lot of immigrant food involves slowly cooking off-cuts to create something wondrous. So he and Shorey are working on Pijja Palace’s version of nihari, a meaty stew that might seem familiar even to many Angelenos who haven’t eaten it before.

“There’s so many similarities between nihari and birria,” Naran says.

Like a lot of chefs, Naran had a phase where he wanted to reject his culture and then ended up embracing his heritage harder than he ever had before.

“I remember going into culinary school and being, like, ‘Dude, fuck Indian food,’” he says. “But then toward the end I was, like, ‘Man, I love my culture.’ I just really found my way back to Indian food.”

What Naran realized, as he learned to cook other cuisines, is that he appreciated the complexity, vividness and deep flavors of Indian food. But then after staging at high-end restaurants like New York’s Indian Accent and San Francisco’s Rooh, Campton Place and August 1 Five, he realized he wanted to put a more relaxed spin on modern Indian food.

“I learned a lot at those restaurants,” Naran says. “All of the executive chefs are great people. Before I even started working at those restaurants, they had very long conversations with me. But there were just a lot of weird things going on in fine dining, like the whole Michelin-star bullshit. That whole thing is just so toxic, What are you fighting for?”

At Pijja Palace, Naran has a collaborative kitchen where it feels like he’s “back in culinary school.” His restaurant, whose tongue-in-cheek name is a nod to how Indian people pronounce pizza, serves dosa onion rings (with mango chutney that grew out of Shorey’s love for the sweet-and-sour flavors at local Thai restaurants he’s frequented recently), okra fries and spicy wings with curry-leaf ranch. There’s a pizza inspired by the green chutney pie at LaVentina’s Pizza in Lakewood, a restaurant that Naran visited as a child. Naran, who is eager to credit those who came before him, says that the Indian pizzas at Julio’s in Artesia are another good example of LA’s diversity.

There’s no tandoor at Pijja Palace, but that isn’t stopping Naran and Shorey from making “tandoori spaghetti” with ingredients like smoked chiles that evoke the flavors and aromas associated with Indian ovens. When Shorey is shopping and sees ingredients he might want to try out, like Indian eggplant, he’ll share his thoughts with Naran.

“Everybody has an opinion in our kitchen,” Naran says.

Like the food, the cocktails at Pijja Palace involve putting an Indian twist on classics. There’s a Chai Whiskey Sour with darjeeling. A riff on an Old Fashioned is made with Amrut Indian whiskey, jaggery and cardamom bitters.

“We’re planning on getting a little bit more creative, too,” Naran says. “I want to make our own vermouth. I don’t know why there aren’t more Indian vermouth makers.”

Naran says he has visions and even artwork for about 15 other Indian-influenced restaurants sorted out. He’s energized by how his casual restaurant and sports bar has become an of-the-moment dining destination, and he’ll be happy to keep staying in his lane.

“I find myself answering a lot of questions today that are very geared toward culture and ethnicity, which I think are cool,” he says. “I’m glad people are asking those. But for me, I just wanted to hang out. I just wanted to keep things fun. I set out to do something a little bit different because I knew it’d be disrespectful of me to go out there and try to cook pure Indian food when I didn’t grow up in India. I don’t want to do that.”