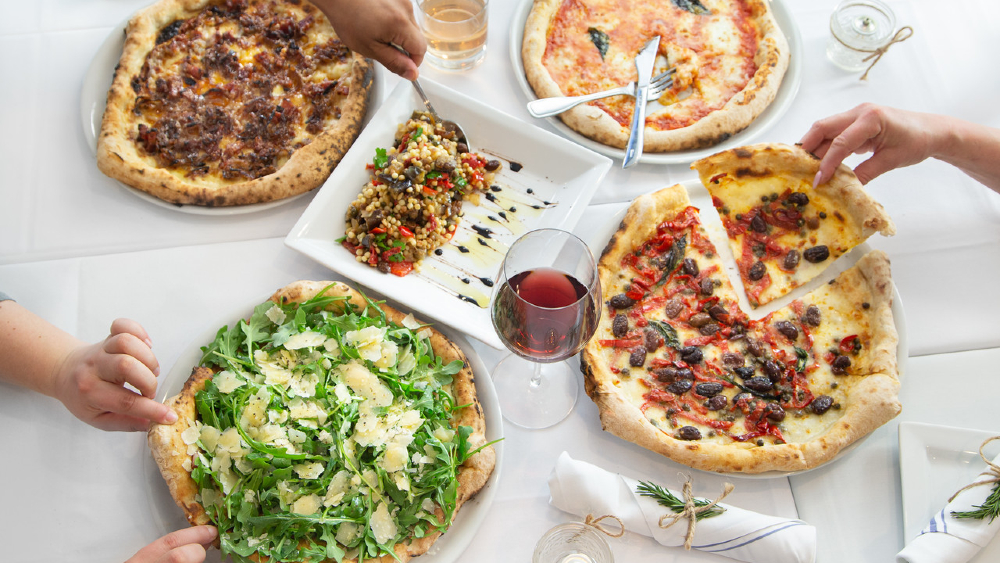 There are four ingredients in Neapolitan pizza dough: salt, yeast, water and flour. It sounds simple enough. But its simplicity is misleading. To make an ideal dough, you also have to consider properties like hydration and fermentation time, which can become very complicated depending on where in the world your kitchen is.

For James Beard Award-nominated chef Gio Osso, who opened an internationally certified Neapolitan pizzeria in Scottsdale, Ariz., last week, the climate was not something he was willing to gamble on.

“It’s so unbelievably dry out here, especially this time of year,” he said. “The humidity could be 5 percent. The temperature could be 110. That’s crazy. It’s really, really difficult to maneuver and bake properly.”

So, he set up a sealed-off, temperature- and humidity-controlled room in his new spot—Pizzeria Virtù—where he executes his dough. His flour, his mixer, everything stays in that room. He keeps it at about 72 degrees F and 70 percent humidity, around the clock. If he can control his environment, he can control his dough.

“Your skin feels great when you’re in that room,” he said. “I just pull out the dough when I need it for service. I’m a perfectionist, so it’s never going to be perfect. But I’m playing with it and trying to get it consistent and perfect.”

Osso has reached near perfection before. The restauranteur opened Virtù Honest Craft in Old Town Scottsdale in 2013, and the Mediterranean menu earned him a “Best New Restaurants” nod from Esquire magazine and a James Beard nomination the following year.

In 2019 he was ready to expand Virtù and broaden the brand. He considered branching out into another market, but then fate stepped in. Grazie pizzeria, located a few blocks away from Honest Craft, went up for sale. The original owners, Maurizio and Sandi Cristiani, wanted to retire, and Osso happened to know them pretty well. When he moved to the Phoenix area 18 years ago, his first job was there, slinging dough.

“So, when the place became available a couple of months ago, we discussed it and [Maurizio] was actually excited about it because he’s like, ‘Oh, it’s great to give it to somebody I know and put it in good hands,” he said. “Within two hours we had a deal and it was done.

“I was like, let’s put going to another market on hold for now and let’s bring Virtù to a different realm. We’re going to do the Virtù style of food via pizza now. Constantly changing, constantly growing, constantly trying to explore new ingredients.”

From that point, it was a whirlwind and an intense couple of months for Osso. He decided he wanted to make a traditional, Neapolitan-style pizza and have it be certified by Vera Pizza Napoletana (VPN), the official judge on the matter.

“I spent all my summers in southern Italy,” he said. “My parents were born there, my aunts, uncles, cousins, everyone’s there. I had an aunt who lived in Naples and so we would take little trips and go up there, and that style [of pizza] is what I was used to. And that’s what really stuck in my head. If I were ever to do a pizzeria, that’s what I would want to do. I want to do it in that style and I want to uphold the tradition of doing it in that style.”

So, he briefly moved to Los Angeles to attend school at VPN Americas, a division of the Naples-based accreditation organization. He learned strict guidelines on its preparation, from how the dough is mixed to how it is stretched and pulled.

“Everything I knew—I thought I knew—about pizza, I had to forget and relearn because I wasn’t used to that style,” he said.

At home, he liked to add wine and honey to his pizza dough. But he wouldn’t be able to do that at Pizzeria Virtù. And he had to learn a whole lot about climate to be able to produce his thin pizzas with big, fat, airy rings of crust around the outside. Luckily, he was able to salvage Grazie’s wood-fired oven, an Italian-made Valoriani, which is pretty well seasoned after 19 years of operation. It’s the only cooking method in the building.

In it, he cooks appetizers like Calabrian cracked olives, and New York-style spicy sausages with peppers and onions. He’s also serving salads such as Orto, made with wood-fired vegetables, capers, pine nuts and dates, and Capri, made with baby arugula, tiny balls of buffalo mozzarella and a charred lemon vinaigrette.

There are the classic margarita and marinara pizzas, but then some with surprising ingredients combined in an unusual style, which Osso calls “the Virtù way.”

The Milano pizza is topped with tart Stracchino cheese, caramelized onions, salty and crispy pancetta and a drizzle of sweet chestnut honey. Another, Salsiccia Bianca, is smeared with broccoli rabe pesto and then dotted with fennel sausage and Caciocavallo—a cheese from Calabria, Italy, where Osso’s family originates.

“You can do whatever you want on top of a pizza. That’s where the creativity comes in,” he said. “And I really want to change all the time and make it very Virtù, which is changing constantly and trying to not so much reinvent, but to try different things and really open people up to different ingredients.”

Soon he will introduce his wood oven-baked pasta dishes, like lasagna with meatballs, which he learned how to make from Italian family members.

It’s been a lot for Osso, who is now a certified “Pizzaiolo” by the Accademia della Pizza Napoletana—a denomination of control (DOC) established by the Italian government. He’s been working 18-hour days, seven days a week.

“I don’t want to be stagnant. I want to change and be new and fresh and exciting all the time,” he said. “This really brings me full circle in my career. It’s been a great learning experience and it’s been a lot of fun along the way.”