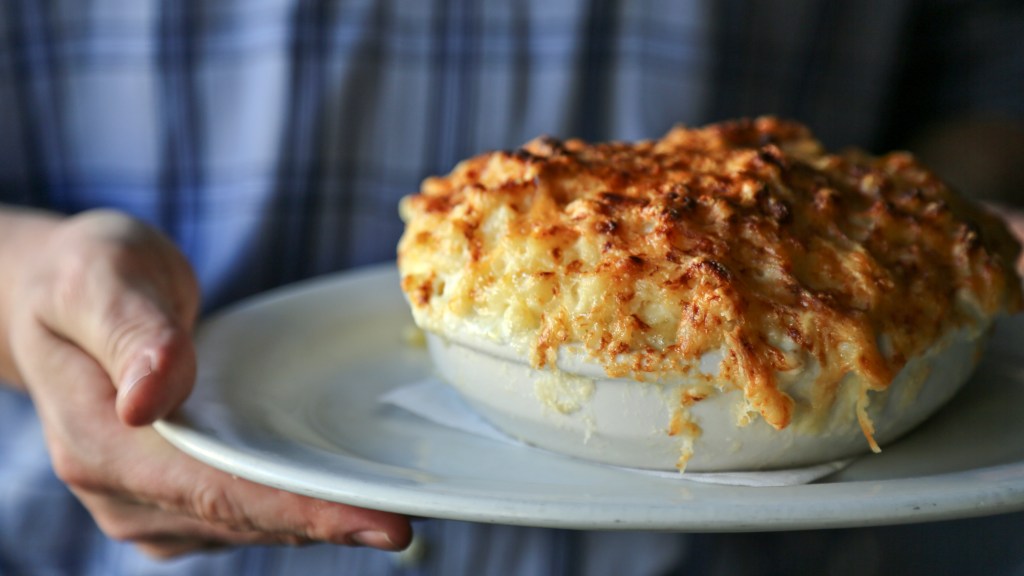 Although she only moved 90 miles from where she grew up to attend North Carolina State University in Raleigh, Ashley Christensen still felt the pull of home. She found the comfort she sought in food. “Both my parents are incredible cooks, neither professionally, but they made food a big part of my life,” she says. “When I moved away, without thinking about it, I reconnected with the things that made me feel at home.”

Her culinary journey began at school where, with friends chipping in, she’d throw dinner parties. “I would explore things that I wanted to learn about and got very comfortable cooking,” she says. It also gave her the confidence to start working in restaurants at 19, where she worked for future James Beard Award-winner Andrea Reusing. She built her skills, studied local foodways, and climbed up to executive chef.

The ambitious chef had a fork-in-the-road moment. At a time when Southern fare wasn’t as acclaimed as it is today, she sensed something special happening in Raleigh’s food scene. “I looked up one day after thinking about, ‘Oh, I’ll move to New York, or I’ll move to San Francisco one day and keep going down this path,’ and I realized that my work was in this community,” Christensen says.

So, a decade ago, instead of heading to one of the country’s culinary capitals, she opened Poole’s in Raleigh—a modern diner where she refined comfort food classics without losing the comfort. Within five years, she’d opened three more restaurants: Beasley’s Chicken+Honey, where she serves Southern fried chicken; Chuck’s, her burger joint; and the cocktail spot Fox Liquor Bar. In 2014, she took home the coveted Best Chef: Southeast at the James Beard Awards. And in 2015 she added Death & Taxes, the woodfired restaurant in a building that had previously housed a funeral home and banks.

We sat down with the acclaimed chef at the Food & Wine Classic in Aspen to talk about the decision to stay in Raleigh, developing her cooking style, the misconceptions about Southern food, and what has happened the last decade to elevate the cuisine.

How much did you feel much a pull to head to New York or San Francisco?
I think in the same way that young cooks do and young chefs do. There’s so much going on in those cities and when I would go and eat in those places, I felt so alive and excited and driven, but then I really felt that at home too. I started to understand the importance of building a relationship with your guests. As you build, you get support from folks in the community, that’s not an easy thing just to leave behind, and that became a very important part of the equation to me. What it means to not be someone who just cooks and then reads reviews about it, but to really become comfortable developing a dialogue with your guests. It has made me stronger as a cook and a leader.

Deciding to stay in the South, you’ve worked to elevate the region’s cooking. What are misconceptions about Southern food that you’ve fought against?
That everything’s fried. For years and years you heard people talk about overcooked vegetables that had sugar in them. I never grew up on that stuff. That wasn’t really a South that I understood or was part of my life.

How so?
The conversation of food over the past decade and a half has people so much more connected with what something is supposed to be. When you take it out of the Earth, what does this thing taste like and how can I celebrate that? The conversation, whether it be food television or food journalism has gotten people so much more excited about that and to know more about food and with that curiosity comes more connection with what truly defines it. That idea of the overcooked vegetables, everything being deep fried and dark in color whereas the South to me is full of such incredible agriculture and freshness, all the beautiful things that grow together. I’ll come home from Aspen to our first butter beans, our first sweet corn and tomatoes really jamming, and it’s those things will inform so much of what we’re cooking right now.

What changed the perception of Southern food?
There was a period in time, as we talked about earlier, like this idea that everyone has to move to New York or San Francisco. I think there was a moment in time after the crash in the market where people started to go home. All these folks who were working in these bustling cities then were like, “I kinda want to go home and do my thing. I want to make my food in the place that I grew up and that is where my family is or where I’m from.” You saw a lot of those folks go home, a lot of those people were in the South. That had a real effect on elevating how we approached ingredients. That’s a piece of it.

I lived in New York right after the financial crash, and there was a flood of Southern restaurants there as well.
Yeah, there’s a comfort there. It’s was pretty wild to see how many fried chicken and biscuit places are in Brooklyn.

What else do you think contributed?
I also think a group like the Southern Foodways Alliance, which has been a big part of how I found my voice and really established a dialogue with chefs all over the South and beyond. That’s a group that really celebrates the people who contribute to cooking and food and Southern culture who aren’t talked about every day. They put a lot of energy into that. With that, there’s a lot of discovery about why things are what they are and what’s at the base of these traditions. That to me is a really prevalent piece.

A lot of people I talk to also point to Sean Brock.
Sean Brock is a friend of mine and I love to hear him talk about Charleston cuisine and how a big part of what he was missing when he first was experiencing it was because people weren’t cooking with the same things that they used to cook with. So now you’ve got great folks like Glen Roberts and Anson Mills who are elevating and bringing back all these great ingredients, like Sea Island red peas and Carolina gold rice and all kinds of other fun stuff. He’s been working on that for years and years and years and now you’re seeing that everywhere. So when we’re cooking with the ingredients that these dishes were based on and intended for, we see that food come back to what it was supposed to be. It’s a little bit like the game of telephone, where these recipes are passed on, maybe not properly documented. They’re not the right ingredients, and they’ve become something else that isn’t as wonderful as what they were based on.

When I spoke with Edouardo Jordan of JuneBaby, he didn’t open his Southern restaurant first, maybe even shied away from it a bit. But eventually he realized he wanted to tell the story of Southern food. Is that something you relate to?
For him and many of us here, it’s so hard to be confident in what makes you who you are. You’re so busy and somewhat intimidated by the things we don’t know, so there’s this thirst for all things that aren’t who we are and wanting to learn about them. With maturity and with taking the time to really establish our own voices, we get back to this and say, “This is my story. If I’m going to make contributions in American cooking, it has to be based on who I am. Everything that I’ve experienced can be a part of that, but this is my foundation.”

I think as cooks, we spend a lot of our early years running away from that and wanting to be a part of something that we see that looks amazing and it has the challenges of needing to find a connection with it, but ultimately, that’s what’s so great about what’s happening in food right now is that people are owning their stories and celebrating them and digging in deep. It’s neat to go back and learn, explore why we care about the things that we care about. And food is just such a beautiful format to get to tell good stories through.

How did you use that journey to develop your style?
Because of the way my parents cooked, it’s always been very ingredient driven, but sort of based on classic ideas. They would read a lot about food and then grow all this great stuff My mother was always a big fan of the idea that Southern food is about what grows in the South and what is stimulated from that. As I went further and further into my work, the thing that I was most drawn to was how food can be comforting. That doesn’t mean it has to be heavy or rich or saucy, but the idea of what food means to people and what makes recipes traditional or classic. So my relationship with food has really been about exploring those ideas and taking things that people perceive as really every day and looking at each piece to figure out how I can make that thing with greater understanding and still really pleasantly surprising.

In 2015 opened Death & Taxes, which is built around wood-fired cooking. In the time since it’s opened, I’ve seen a lot of restaurants with a similar style also. Do you sense people wanting to get back to a more elemental style of cooking?
I definitely feel that. We’re always thinking about technology in kitchens and all the different things that new pieces of equipment can do, but this was like a return to the most rustic style of cooking, which is making coals and figuring out how close things need to be to them to cook.

If you look at molecular gastronomy, that’s one of the easiest places to see a really intense style of cooking and there are about 10 people in the world who do it really well, in a way that experience can be just absolutely mind blowing. But because the techniques were so accessible, a bunch of people started getting involved with it who didn’t have the same connection with it that a lot of the folks who excel in that field do. I feel like you have to have this elemental background in cooking before you can go, “Okay, how do I want to bend the rules and make use of this technology?”

The pendulum has swung away from molecular gastronomy toward a more naturalistic approach.
It’s such an interesting next stage after seeing so much molecular stuff, this is the most rustic way of cooking. What’s really beautiful about it and why people are so drawn to it is there’s just this connection. When you’re working with coals and you’re over the wood fire, you have to have a deep understanding. You’re not just turning something on and off. You’ve got to be in charge of everything about what’s happening with it for hours and hours and hours. I think it leads us to a more elevated sense of attention and level of attention that we pay to the food and connection as well, but it’s also I think it asks more of the cook to think about the ingredient and what it’s going to do and how it’s going to react with the relationship with the coals. We get a deeper connection and exploration of what makes ingredients what they are.