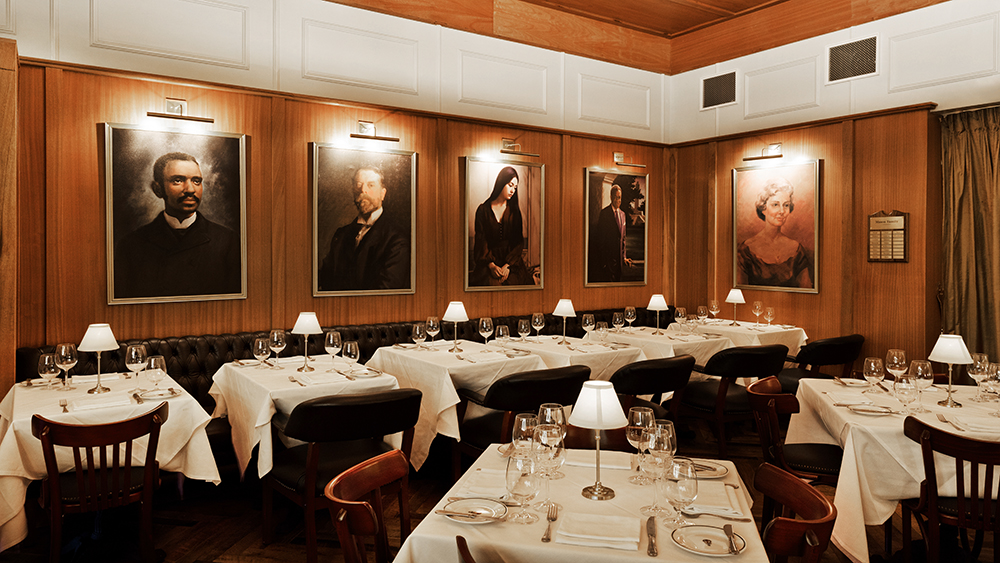 It’s six o’clock on a Friday night in Santa Monica, and Blake Johnson is right where you’d expect him to be. The young serial entrepreneur, who has founded companies ranging from fintech to orthodontics, has tucked into his table at Mason with his wife and kids. He was at the dark, wood-ensconced midcentury restaurant the night before too, but that meal was for business. On both occasions Johnson didn’t have to wait to be seated, and the staff all knew him. On this night he skipped the wedge salad, Dover sole and steak frites to order something not on the menu, because anytime he’d done that before the chef made a delicious rendition of exactly what he was craving. “I’ve been looking for a restaurant that has high-quality food and a really good atmosphere,” he says. “Mason is a place I can be proud to take people to, but it also still has the comforts of home.”

You know to look for Johnson here because he’s at this same table at the same time every Thursday and Friday. And on any given week he may run into Bitcoin entrepreneurs, the assistant coach of an NBA championship team or the showrunner for an Emmy-winning sitcom. But he’s more than just a regular. He, like most of the people around him that night, has paid to make this his table every week.

Mason is semi-private, meaning the majority of people who dine there are members (whom the restaurant calls trustees) or their guests. The general public can come in and sit at the bar or snag a table here or there, but for the most part, this restaurant is a cloistered little enclave for the well-heeled in Los Angeles.

On the other side of the country, WS New York, a similar establishment in Manhattan’s Hudson Yards, opened last fall—in partnership with Wine Spectator—for a select group of members. Down in Miami, residents of Oceana Bal Harbour have a restaurant reserved just for them. And chef Jean-Georges Vongerichten is planning a private restaurant inside 220 Central Park South—the same New York City building where hedge funder Ken Griffin spent $238 million for the most expensive apartment ever sold in the US.

And yet it may seem anathema to chefs and restaurateurs to so greatly limit the number of people who can come into their establishments. How does that make business sense when it’s already hard enough to keep a restaurant financially viable in a big city?

“A lot of people are trying to do it because of cost—the rising cost of food and labor and whatever it might be. Having the members’ fees helps offset a lot,” says John Terzian, cofounder of LA-based H.wood Group, which owns Mason.

In cities like New York and Los Angeles, running a restaurant is becoming prohibitively expensive. Award-winning chef Tom Colicchio closed Craftbar in 2017 after 15 years because the landlord raised his rent 50 percent. And across the City of Angels, the price per square foot of commercial real estate has soared; in some neighborhoods, like Koreatown, costs have doubled from 2010 to 2019. At the same time, in many major metro areas, the minimum wage has increased. So a steady stream of revenue can be key to survival in an industry with thin profit margins.

But a restaurateur can’t just throw open the door on a private place and expect people to show. There has to be a customer base to make it work, as with the residents of a condo community or, in WS New York’s case, billionaire developer Stephen Ross’s Rolodex. “It takes having a really deep network of people and an understanding of them,” Terzian says. “Pulling off this type of concept has taken 12 years of us in the hospitality business.”

To dream up Mason, the duo behind H.wood Group, Terzian and Brian Toll, looked to the past, to Rao’s, a red-sauce Italian joint in East Harlem that has long been New York’s toughest table. “It’s the same model as Rao’s, where you own the table,” Terzian says. H.wood wanted that kind of exclusivity for its nexus of VIPs, who also frequent its popular nightclubs around town. The benefits of such a system, where the two could curate a group of interesting people who had standing reservations, really hit Terzian when he was at another restaurant.

“I went out with a friend and had a reservation, but it took an hour for them to sit us and no one knew us,” he says. “In my head I was thinking I would pay 5 grand, 10 grand a year to never have to wait like this.” So he and Toll got to work building out a 14-table restaurant nestled between Santa Monica and the Pacific Palisades, where the Pacific Ocean rolls blissfully outside. They offered the trustees a concierge they could contact to make arrangements, like letting a friend take the table on their designated night. The evening’s food and drinks can be charged to the account, so there’s no fumbling with a check at the end of the meal. And members who bought in early have their valet parking covered. Terzian and Toll tried to make the experience nearly frictionless.

At Philadelphia’s Fitler Club, which opened last spring (initiation fees started at $2,250), it’s that level of service that has most appealed to members who fill the lifestyle club’s private restaurant, overseen by chef Marc Vetri, a James Beard Award winner. “A member told me—and I hear this comment all the time—‘What I love the most is that I can just come here. I don’t have to make a reservation. I don’t have to wait in line outside some place that anyone in the world can go to. When I come here, they recognize me, they already know my preferences, they know where I like to sit, they know what type of still or sparkling water. It’s anticipated,’ ” says David Gutstadt, the club’s founder.

With Mason promising a personal touch, tables started moving quickly, with weekends getting snatched up for a lifetime membership in the six figures. Weeknight slots remain for a few grand per year. Those annual dues make the table yours for the whole night, with no minimum spend on food and drink. Johnson hopped on early, buying two nights because it felt like a natural fit.

“People like me want to be able to experience these types of esoteric environments—clubs that are exclusive or there’s a barrier to entry,” Johnson says. “Mason was something I was looking for. I tend to keep smaller circles. It’s a much more exclusive, personalized feel when you go in.”

Certainly, affluent diners could get that kind of exclusivity by simply going to Michelin-three-star restaurants, where a $595 tasting menu at Masa can keep a lot of the general public away. The problem is that people don’t want to eat four-hour-long culinary journeys a few times a week. Besides, not everyone needs a transcendent meal for a good night out. People like Johnson look for those dining experiences sometimes, but other times they’re using the restaurant as a place to hang out with the family or entertain business associates. And they’d like a place with familiar faces. Hence, the operators of private restaurants have sought to create not just a clubby atmosphere but an actual club.

The civic organizations of previous generations have faded, like Rotary, which has lost a quarter of its North American membership in the last two decades. What hasn’t faded is the desire to be part of a community. Restaurants will play an increasingly important role as a gathering place, according to a report by the National Restaurant Association on trends that will define the industry in 2030. Some establishments will succeed because they will place “less emphasis on table turnover and more emphasis on facilitating repeat socializing by customers.”

It’s something Fitler Club is already seeing. “Our number-one comment from members is they love the idea of community, and they want it. We’re agnostic to what you do or how old you are. We more look at, are you a leader? Are you a connector? Are you an intellectual in the community? Then we want you,” Gutstadt says. “We had a holiday brunch, and 250 people came and ate in our restaurant. It was amazing to see because you’ve got families now. People are starting to get to really know each other, and it’s like, ‘Oh yeah, let’s meet at the club.’ ” That’s the alchemy that will make private restaurants succeed: an air of exclusivity combined with a sense of personal connection and belonging.