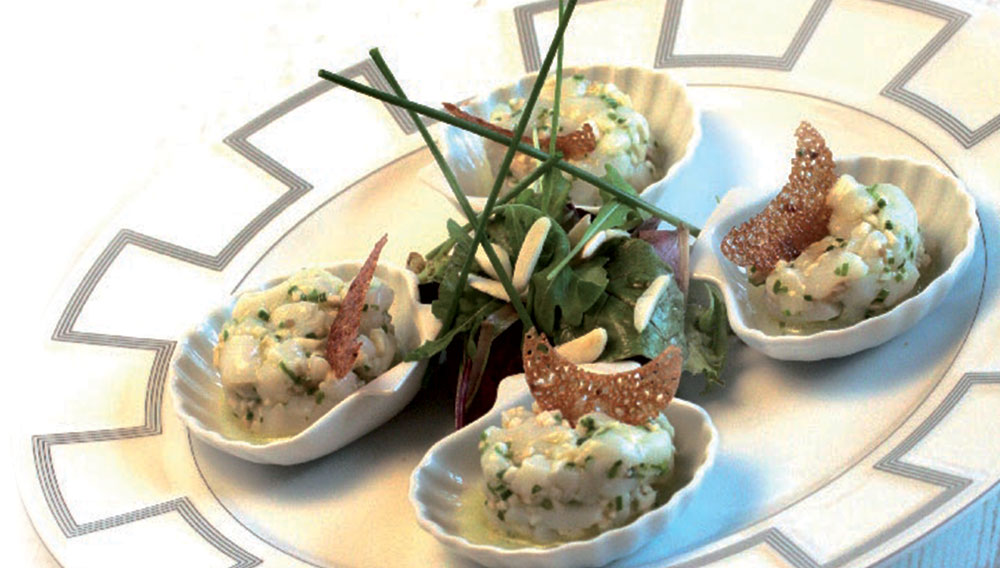 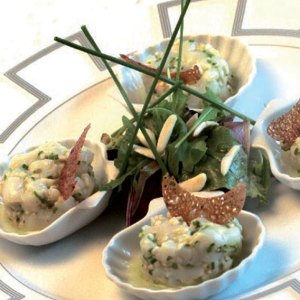 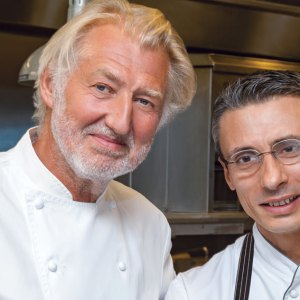 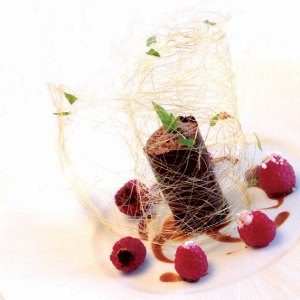 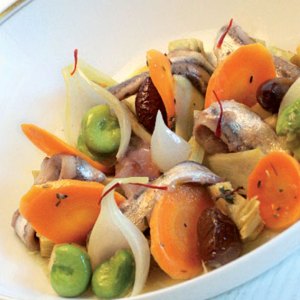 Fearless, daring, and profoundly inventive, Pierre Gagnaire has been called the world’s most inspiring chef thanks to such creations as garlic ravioli in truffle sauce with spring vegetables, rocket juices with tarragon, Bordeaux cannelés, thin-sliced veal kidney with turmeric-tinted grapefruit-and-Guinness sour essence, and a cocotte of veal sweetbreads over fresh hay. Yes, that is just one dish. A Gagnaire course is a showcase for an uncompromising vision that surprises, delights, and sometimes confounds diners.

Unconventional though he may be, Gagnaire began his culinary career in the most traditional way in 1965, when he became an apprentice at Paul Bocuse near Lyon, France. He later opened his own restaurants in nearby Saint-Etienne, earning two Michelin stars at one and three at the other. In 1996, he moved to Paris and opened Pierre Gagnaire, which earned three stars and brought him worldwide acclaim. He never stopped pushing the limits of French cuisine, collaborating with his friend, the chemist Hervé This, to pioneer molecular gastronomy and, along the way, create the now-ubiquitous 65-degree egg. Today, Gagnaire presides over 14 restaurants on four continents, including Twist at the Mandarin Oriental Las Vegas, his only location in the United States. He is also the author of six cookbooks and a revered figure in the culinary world who has set the example for many of today’s cutting-edge chefs.

One might expect Gagnaire, when asked to name the world’s most promising chef, to choose another glamorous wizard of molecular gastronomy; instead, however, he singled out a chef who works in a village in the South of France and specializes in preparing dishes that are closely tied to the land. Gagnaire met Jean-Marc Boyer when Boyer was working at L’Ambroisie, Bernard Pacaud’s Michelin three-star restaurant in Paris, and the newcomer later trained for a brief period at Pierre Gagnaire. Even after just a few days, Boyer made an indelible impression on the master chef.

Boyer had initially moved to Paris to work at Dodin-Bouffant with Jacques Manière, the champion of la cuisine à la vapeur, a technique of cooking with steam that emphasizes freshness and simplicity. But in 2003, after 18 years in the city, he returned to Lastours, in his native region, and opened his own restaurant: a six-table establishment in an old textile factory overlooking the Orbiel River called Le Puits du Trésor. As always, Gagnaire offered support. “I’ll never forget,” Boyer says, “all the times he called me to say, ‘Hang in there, Jean-Marc, and continue to work.’ ”

At Le Puits du Trésor, guests are offered a choice of three menus that Boyer, 46, constructs using the vegetables, fish, fowl, and meat he sources himself that day. Surpassing the concept of mere seasonal fare, Boyer crafts a true cuisine du jour. Though Le Puits earned a Michelin star in 2007, Boyer still works in relative obscurity, receiving little press even in France. A rare profile in Le Figaro offered a glimpse: Cooking at home at 3 am, Boyer concocted a dish of juniper-roasted pigeon with morels, prunes, and turnips steamed in the fowl’s jus. With childlike excitement, Boyer woke up his wife, shouting, “Nathalie—you’ve got to taste this!”

PIERRE GAGNAIRE:  I met Jean-Marc when he was pastry chef at one of my favorite restaurants, L’Ambroisie. He worked there for 12 years, in a restaurant that always did the same thing but with great precision. Then he said to himself, “I’m going to create my own history,” and returned to his own region, a difficult place to do that. It’s the countryside, and it’s far from everything.

JEAN-MARC BOYER: I returned to my land because I love nature. I am in my village of 160 inhabitants, lulled every day by a river. I am in contact with producers who tell me their stories and nourish my imagination. I try to completely embrace all of this and create a story—the story I tell on my plates. If you “read” my plate, you can understand that I’m not a complicated person, that it is the product that counts above all, and that behind it there are artisans who are fabulous and of my region.

PG: But you are also a true artisan—not a TV guy or a show-off. You are in your restaurant, doing real work that evolves and advances. You have a life project—and a work project. That’s very important because if the work project isn’t aligned with the life project—that’s not great. All of us need to find a life project. That makes everything more beautiful and stronger.

JMB: One comes back to the beginning, to the start of the path. I had a very beautiful education with Mr. Pacaud, who taught me about products and lots of other things. But what I found with Mr. Gagnaire was beyond Brillat-Savarin’s The Physiology of Taste; he was into the psychology of taste, into meeting his customers and understanding what they are about. Now I am in a place that I won’t leave; I’ve taken root.

PG: Jean-Marc represents the dream of an American who comes to France. For me, it’s the spirit that makes our country perhaps unique. He represents a past that lives in modernity; he represents a culture, a history, and he makes a living out of it.

JMB: You know, I love to run. One day I’m running, and I see some pigeons flying, so I follow them. I see a gentleman who comes out of his cabin, and he asks what I want. I tell him I saw the pigeons, and he tells me, “Those aren’t pigeons; they’re squab.” I tell him I’m a restaurateur and ask if he sells them. “No, I don’t sell them.” Six months later, he calls and tells me, “They’re ready for plucking.” You won’t find them anywhere else. I have a fisherman, Michel, an extraordinary man. You’ll discover something else with him. He fishes for trout for you by virtue of his knowledge of the underwater oxygen and the fish’s behavior. You don’t find that anywhere else. I have a kid who comes from the mountain [la Montagne Noire] who goes there all night to hunt for frogs for me. We have wonderful morels and cèpes—they’re so beautiful, those cèpes! When the season comes, I head to the mountain in the morning, then I serve them at lunch and at dinner.

PG: And you get them for three euros, and we get them for 50 euros in Paris! If Jean-Marc wanted to do something elsewhere, he’d be able to, because he has the technique, the savoir faire, the structure. But we’re in a world today where things move too fast. People don’t have the time to reflect. What brings me closer to Jean-Marc is that he takes the time to reflect, the time to find his true individual place. I do that today, but I couldn’t do it at 45.

JMB: When people come into my restaurant, I want it to be a pleasure; I don’t want things to be complicated for them. They need to replenish themselves. It has to be about pleasure. You push open the door, you come in, you sit down, you look at each other, you smile, you ask questions, you’re moved, you reminisce. If a table is pleasant, it brings people together. We find each other. We talk of forgotten things. All that is part of the comfort. People don’t have time to analyze how moved they are, and that’s why things have to be simple—well, simple without being simple.

PG: When one tries to offer people emotions, it’s a small work of art.

High rollers and pleasure-seekers around the globe may be drawn to Las Vegas for its magnificent casinos and extraordinary gastronomy, but Southern Nevada is also a place where 340,000 people—including more than 130,000 children—are not sure where their next meal will come from.

The financial collapse of 2008 dealt a devastating blow to the city, where the construction boom came to an immediate halt. By late 2010, Las Vegas possessed America’s highest unemployment rate at 14.7 percent and the highest foreclosure rate, with more than 70 percent of homeowners with mortgages owing more than the value of their homes. At that point, 13 percent of Nevada children and their families had been evicted from their homes. For these reasons, Pierre Gagnaire chose Three Square, a food bank founded in December 2007, as his beneficiary for the Robb Report Culinary Masters Competition.

The organization’s mission is to feed the hungry in four Southern Nevada counties through its food bank, food-rescue program, and ready-to-eat meals. “One out of six people in the state is food insecure,” says Brian Burton, Three Square’s president and CEO. “We started in the economic downturn, which this city felt very harshly in the great recession. We’re doing better, but we still have a long way to go.”

Every month, more than 100,000 people receive food through Three Square and the non-profit associations, religious groups, and schools that make up its 600 partners. At more than 1,300 food pantries, soup kitchens, shelters, and after-school programs throughout Southern Nevada, the organization distributed more than 30 million pounds of food in 2013, the equivalent of 25 million meals. Two hundred and seventy-five schools in the Clark County School District participate through a backpack program, in which students are given food for the weekends.

Gagnaire is among the more than 50 chefs on Three Square’s Culinary Council, whose distinguished members also include Paul Bartolotta, Hubert Keller, Rick Moonen, Charlie Palmer, and many others. Overseeing annual fund-raising events, volunteer efforts, and donations of food and funds, the council is an essential part of Three Square. “They hired our first executive chef, John Hilton,” says Burton, “and they remain involved in really cool ways. A lot of them do special events and tastings at their restaurants. They also designed Three Square’s kitchen, which prepares and packs between 6,000 and 9,000 meals per day. I call it a logistical miracle.”

The Culinary Council chefs also participate in Restaurant Week, which is held twice a year in Las Vegas, and Twist, Gagnaire’s restaurant in the Mandarin Oriental Las Vegas, has donated a portion of its sales to Three Square. About 150 restaurants name Three Square as their beneficiary, says Burton, and the event raises almost $200,000 per year, which is the equivalent of about 600,000 meals.

“Pierre is not just an extraordinary, innovative chef,” Burton says, “but also someone who doesn’t forget the people who can’t afford to come in and have those experiences and meals. He’s very compassionate.”