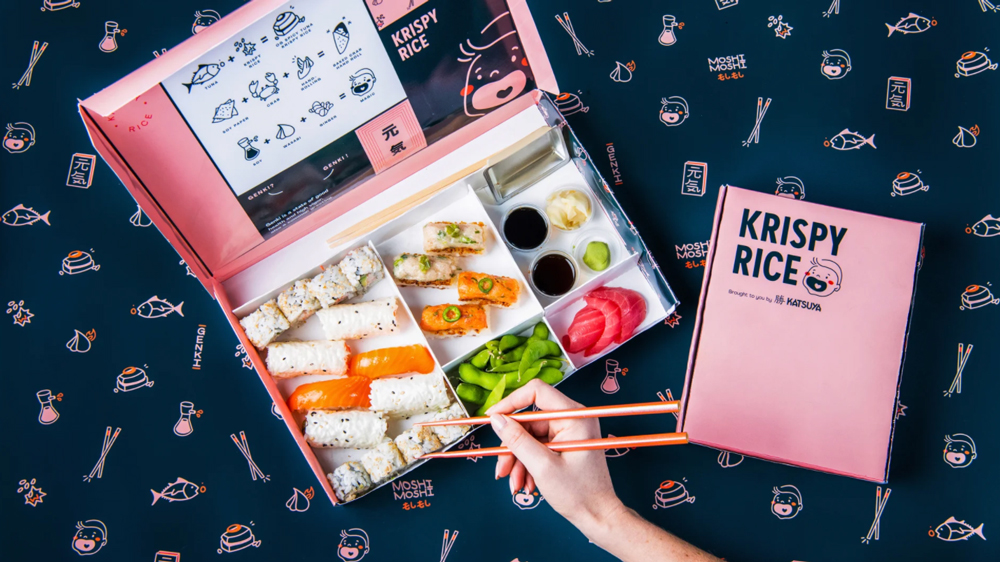 When the pink boxes with the playful illustrations arrived, my wife couldn’t but help remark, “Oh, this is fun.” Instead of unlabeled plastic trays or nondescript cardboard containers, the takeout boxes were more than just an afterthought. Opening each of the $40 bentos of sushi the nigiri, temaki, sauces and edamame were arranged just so, with corresponding labels on the lid. The design conveyed that care had gone into how our delivered dinner would be received by us in our home. This didn’t feel like ordinary takeout.

The box was created by a new delivery-only restaurant Krispy Rice. It’s a subsidiary of SBE, which has restaurants like Bazaar by José Andrés, Katsuya and Umami Burger in its portfolio along with hotels and nightclubs around the world. SBE moved up Krispy Rice’s opening as Covid-19 created demand for delivery, but this project was long in the works. And if successful, SBE’s network of delivery-only ghost kitchens will change the playing field traditional restaurants will face when Covid-19 abates and the economy fully reopens.

This is how it will work. Krispy Rice is essentially a bento box concept created in concert with SBE’s dine-in sushi restaurant Katsuya. Instead of chefs at Katsuya trying to execute takeout orders in the traditional space, purpose-built kitchens without dining rooms do the work. Importantly, it’s not just one location covering a city. In Los Angeles where I live, sprawl and traffic congestion can make for a limited delivery radius around a single restaurant. When purchasing from Krispy Rice, your order is received and routed to the ghost kitchen closest to you. That cuts down on delivery times and ensures food is fresher when it arrives to your front door, solving part of the problem of restaurant food not traveling well.

For SBE, LA is first and New York will come next. “We’re looking at 34 to 35 locations by the end of the year and each of those locations brings five brands to the table,” says Martin Heierling, SBE’s chief culinary officer. This network of kitchens will serve more than one concept in the SBE portfolio. There’s already Sam’s Crispy Chicken, a fried chicken sandwich concept, and the recently launched Plant Nation, a vegan restaurant. SBE’s ability to efficiently scale up in a market will dwarf what an independent restaurant can do on the delivery front.

Other concepts will operate out of the ghost kitchens, like the vegan Plant Nation.  Photo: courtesy SBE

That’s what makes it different from other ghost kitchen concepts you’ll read about. When Uber founder Travis Kalanick left the company, his next project has been building CloudKitchens. He’s snapping up space in major metropolitan areas and building ghost kitchens for people to rent. Those entrepreneurs can start out a new restaurant concept without as much overhead in much the same way people have with food trucks the last decade. The problem with this model is that although Kalanick will have a large network of kitchens, individual restaurants will still have the same limited delivery radius as a traditional brick-and-mortar restaurant.

The Covid-19 crisis is accelerating a trend that was already happening inside the restaurant industry and giving restaurants that are purpose-built for delivery, like Krispy Rice, a foothold in the market that would have been more difficult if all restaurants were still fully functioning. Before restaurant closures hit, the delivery market was already rising at a double-digit pace. Between 2014 and 2019 the annual number of delivery orders at restaurants grew from 1.72 billion to 2.04 billion, an 18.6 percent increase. That will only continue into the future, with L.E.K. Consulting predicting that by 2023, delivery sales will outpace in-restaurant sales. That delivery demand will be partially driven by the fact that 80 percent of millennials will be parents by 2026, thus they’ll be more likely to want to dine at home, according to restaurant consulting firm Technomic.

Chefs had already noticed habits changing. “People don’t want to dine out anymore. They want to go on an app and get it delivered to their house,” James Syhabout, chef-owner of Michelin two-star Commis, in Oakland told Robb Report earlier this year. “The habit that’s still intact is going to a nice dinner for a special occasion, rather than, ‘Hey, let’s go out and have a nice dinner just because.’”

Even though restaurants are beginning to reopen across the country, most are allowed only limited capacity and will continue to rely on delivery to stay afloat. And many should be thinking about how it can be a long-term revenue stream. But to command a pricepoint like the one in their establishment, restaurateurs will have to create an experience that feels more premium than what takeout has been known for, which is where that pink Krispy Rice box comes in.

The SBE team thinks about its containers in the same way your favorite restaurant considered the plates and silverware you dine with. It’s not that dissimilar from Apple’s fetishization not just of its product but of its packaging. As more restaurants enter the delivery space, they’ll have to differentiate themselves. SBE is using design to signal something in your lizard brain that this cardboard box of rice and fish on your own dining room table is fun. See those little cartoons? Prepare for fun.

“The expectation of quality is going to continue to grow,” Heierling says. “People will demand better quality from more reliable operators like James Beard Award-winning chefs. That was true before the pandemic, now that is accelerating at a much faster pace.”

An impediment to that consistency is SBE’s current reliance on third-party delivery services like Postmates and Caviar. So the company is exploring ways to vertically integrate with an app that services its brands and also its own delivery drivers.

As SBE grows its ghost kitchen footprint, it will look to build on that infrastructure and change the restaurant model in different ways. SBE is in the hotel business, with the world’s largest hotel chain, Accor, owning 50 percent of the company. That in and of itself allows for scaling ghost kitchens in a way that other companies can’t right away. What if those hotel kitchens can be put to use more effectively where they deliver five concepts worth of restaurants for room service, but then are also a ghost kitchen for a surrounding residential radius. And also, what if ghost kitchens think beyond just restaurant-style food?

“People don’t always want a gastronomic experience, but also a habitual dining experience like paleo or keto or a smoothie diet,” Heierling says. “These preferential eating habits fail because it’s a lot of work to do at home every day of the week. I think there’s a market for that. Don’t just look at everything through a restaurant lens—what about everything else?”