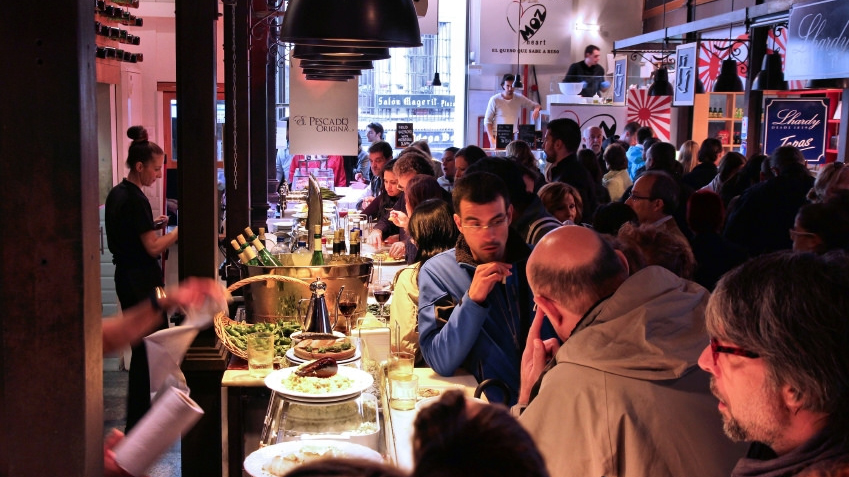 We’ve all been there: You’re trying to enjoy a nice meal, but it’s impossible to hear your dining companion. You may say, “Steak is oversalted,” and the person across from you—straining to hear and face crinkled in disbelief—yells back, “Jake was assaulted?!?” No, Jake is fine. The restaurant is just too loud.

The problem is that you usually don’t know if a restaurant will be too loud until you arrive and sit down, and by that point, it’s too late to do much about it. You have to just grin and bear it. However, a Seattle-based company has released an app that can warn you ahead of time whether a restaurant is too noisy to suit you.

The free app, available on both the App Store and Google Play, was developed by neuroscientist and audiologist Kelly Tremblay. Kind of like how Waze sources data from users to help guide you to the best route when you’re driving, iHEARu (our copyeditor was a real big fan of that particular formatting) users take a reading of the decibels in a restaurant and share it to company’s database. That decibel data is paired with people’s reviews about whether restaurant staff accommodates requests to adjust music volume and if a dining room has noise-reducing amenities like acoustic tiles.

This could sound like a minor problem, but when Zagat surveyed diners in 2015, restaurant-goers’ biggest complaint wasn’t slow service, high prices, or rude waiters—it was noise, and by a long shot. Since then, the problem has only gotten worse. As restaurants became less formal in the late aughts, and dining rooms trended toward more stripped-down, austere design, the result was our favorite places to eat became louder. We’d done away with things like tablecloths that helped deaden sound and started pumping in the music the kitchen staff was listening to in the back.

Now comes the pendulum swinging the other direction. Creating a reprieve from the din has become big business. Restaurateurs that can afford it need to bring in acoustics experts to evaluate their space. That may mean spending $60,000 just on acoustic ceiling tiles, as Alex Stupak found out when he was opening Empellon in Midtown Manhattan.

If enough people start using iHEARu, you’ll know if the restaurant you want to eat at is making the effort to have a dining room with a reasonable sound level—long before you arrive. So now when you’re yelling at a restaurant, it won’t be because it’s too loud; it will be because you’re in an argument that makes everyone else really uncomfortable.