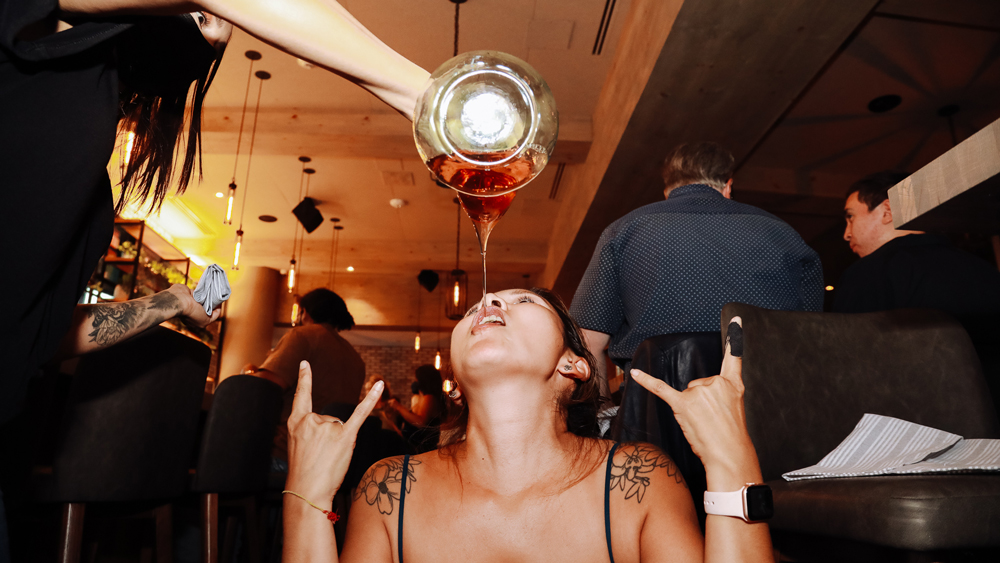 Issima, the West Hollywood destination that stylish restaurateur Marissa Hermer opened in July, started as a solution to a terrible problem.

“Issima was obviously born out of the pandemic,” Hermer says. “We fell into that spot out of a real need for survival. In order to keep our restaurant family working and keep paying them and to keep feeding our patrons, we needed to find an outdoor space.”

Hermer and her husband, Matt, had opened the indoor-only Olivetta nearby in January 2020. Olivetta, with its vibrant more-is-more color palette from British designer Tom Parker of Fettle Design, became a revelrous destination where a well-dressed crowd feasted on chef Michael Fiorelli’s excellent pastas and swayed to beats dropped by DJ Moses Truzman. And then the music stopped.

But now at Issima, the Hermers, Fiorelli, Fettle and Truzman have re-started the party. The pulsating heart of this restaurant at the Kimpton La Peer hotel is a poolside dining area designed to evoke European beach vacations, complete with travel-inspired cocktails by beverage director Mel Meza. There’s a blue-and-white color scheme that’s a nod to the tile floor at the house one of Hermer’s friends has in Ibiza. The water glasses are the exact same glasses that Hermer saw at Eden Rock in St. Barts.

Issima guests get their hands dirty dipping Fiorelli’s Sonoma lamb ribs into cucumber-garlic yogurt, making their own tacos with a whole sea bass and Tehachapi Heritage Grain Project tortillas and enjoying caviar like they’re eating chips and dip. And if spicy tomato sauce starts splashing around the table while you’re picking apart the lobster arrabiata (made with a whole 1.5-pound Maine lobster), that’s kind of the point.

The restaurant is like a big pool party.  Photo: courtesy Marcus Truzman

This food is delicious and serious and also messy and fun. This, in fact, is the opposite of clubby restaurants that avoid garlic, chiles and anything that might threaten your breath or the aesthetics of a new manicure. Hermer thinks it’s a little bit like “the difference between lust and love.” Yes, you can go somewhere else for the scene and the adrenaline rush. But good food nourishes you and makes you happy in a more profound way.

So this is how she’s chosen to create a party vibe during a pandemic. And it’s working.

“I’ve noticed sales of Champagne and caviar flying because people needed that outlet,” Hermer says. “They needed escapism. It’s been a rough 18 months. If you’re going to go out, let’s make it worth your while.”

Hermer used to do PR for Ian Schrager in New York before she became a reality-TV star on Ladies of London and then started her LA restaurant empire with The Draycott at Palisades Village. She knows that Schrager and Steve Rubell designed legendary nightclub Studio 54 to be a place where guests felt like the star of the show. Hermer believes that eating with your hands can give you the same feeling.

“Moses and I send each other music all day long,” she says. “I’m constantly doing these Spotify deep dives and I stay up way too late or get up too early in the morning. And Shazam does this crazy thing where you can actually do a GPS geolocator and see what people are Shazaming in different locations. So one of my favorite things to do as a music obsessive is to Shazam Nikki Beach St. Barts, where I think the DJs are amazing, or Nammos or Scorpios in Mykonos, or Juan y Andrea in Formentera.”

There’s also a European party vibe at Bar Lis, the new rooftop lounge at the Thompson Hollywood hotel. Bar Lis has a DJ booth, piano and disco ball. The design is inspired by the Côte d’Azur, and the scenester-chic crowd and energy on a Friday might also remind former New Yorkers of a slightly more grown-up version of the wild nights they had at Le Bain or the Beatrice Inn back when it was a club.

These tacos at Issima get you eating with your hands.  Photo: courtesy Marcus Truzman

But more and more in Los Angeles, a good scene often comes with great food. So formidable chef Lincoln Carson, who’s also working on the forthcoming Mes Amis restaurant at the Thompson Hollywood, serves a terrific burger, hamachi crudo and Kusshi oysters with rosé Champagne mignonette. Carson is a dessert wizard, even when he’s not baking, and his peach melba with frozen Greek yogurt is a lovely ending to a meal with a view of the Hollywood Hills. As a friend correctly pointed out, peeled peaches are sexy.

At Etta, the sprawling Culver City restaurant that’s the first part of Michelin-starred Chicago chef Danny Grant’s major expansion into Los Angeles, guests use their hands to dig into wood-fired seafood picnics with grilled lobster, bubbling shrimp, king crab, bread, lettuce cups, yogurt sauce, pickled chiles and other spicy accompaniments. There are “celebration shots,” which include a shortbread cookie with buttermilk frosting and rainbow sprinkles (and are free if it’s your birthday).

But what might be the most celebratory moments at Etta are a nod to European vacations. For $65, you can order “the porrón and a Polaroid” for your table and get a Spanish wine pitcher filled with red wine, white wine, rosé or margaritas along with a roll of film to capture all the alcohol poured down gullets.

In New York City, David Rabin first made his name in hospitality by opening groundbreaking nightlife destinations like Lotus and The Double Seven. He’s since become a prolific restaurateur whose portfolio includes two hot spots, Sona and Veranda, that opened during the pandemic. Another of his restaurants, American Bar, debuted last February. All of these destinations offer good food with international influences and a festive vibe, but they all have their own personality and playlist.

The good people at Etta are standing by to pour booze down your gullet.

“There are no chill moments, really, at Sona,” Rabin says. “Its meant to be fun and upbeat and exciting. New York is sort of driven by the fact that so many people live in small spaces and need to go out.”

At Veranda, where chef George Mendes serves sea-salted cod casseroles, cauliflower “steaks” and dry-aged New York strips in a gleaming greenhouse-like space, Rabin and music curator Jared Deitch’s playlist “is definitely in the Erykah Badu and A Tribe Called Quest school and all the things that flow from that.” There’s funk and soul and neo-soul and De La Soul.

Rabin knows that all his spots need to feel different. He has a lot of overlapping customers and doesn’t want to give them a cut-and-paste experience. The music at his restaurants changes regularly because he doesn’t want guests or his employees to get bored listening to the same 200 songs over and over.

“To me, the staff is so preeminent in people’s experiences that I want them happy and bopping around,” he says.

He’s also constantly adjusting the lighting in his restaurants, based on factors like how many people are there and how they’re behaving. He still marvels at how The Odeon always seems to have perfect hues.

“I do think that, from top to bottom, the places that are going to quote-unquote win are those that are paying attention to every aspect,” Rabin says.

Rabin is primarily focused on restaurants, but he hasn’t abandoned nightlife. Beyond operating rooftop bar Jimmy (atop the ModernHaus Soho hotel that’s home to Veranda), he’s working on the resurrection of cocktail destination Temple Bar, which should debut in the coming weeks. At Temple Bar, where he’s partnered with Goyal and Attaboy’s Sam Ross and Michael McIlroy, Rabin is “really going for that nightlife for grown-ups vibe” that reminds him of The Double Seven.

“If you’re looking to go rage in a club, we’re not really going to be for you,” he says. “But if you’ve had a really nice dinner somewhere and it’s 10:30 and you’re not ready to go to bed and want one or two more martinis and to hear some great music and be able to hear your friends speak, that’s sort of the raison d’être of Temple Bar.”

As Hermer points out, people miss their friends more than ever now. And they want to converse and laugh and share stories when they’re together. They don’t just want to be in a loud place with a beautiful crowd staring at their phones.

“I think partying now means connection,” she says. “Maybe it’s not as debauched as it was before, because it can’t be, but the urge to socialize is still there. And it always will be.”