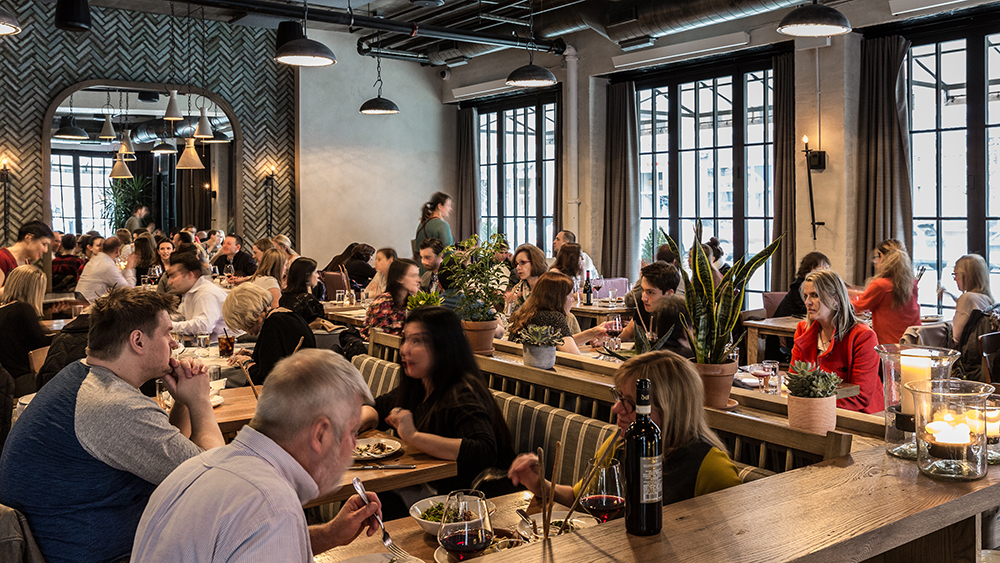 At some point, the volume got turned up high, to full blast, in American restaurants. I can personally date it to a decade ago, when I dined at Graham Elliot’s eponymous Chicago restaurant and realized that the old notion of table talk was dead and that no one was ever going to pass the salt—who could hear me ask for it? Instead there was only the deafening din of hard rock and the recognition that we would suffer in enforced silence because the chef had rediscovered his teen spirit.

And the same story was true everywhere, from New York’s raucous Babbo to San Francisco’s Nopa.

It wasn’t just the blasting soundtracks. Contributing to the din were a range of issues, starting with shifting fashions and a recession that demanded economy. Out went the cosseted dining room bowers, wrapped up in soft upholstery, thick drapes and white linens, which cushioned noise. In came cavernous industrial spaces, all hard edges, crowned by high exposed ceilings and tricked out with slate, cement and wood, which only worked to amplify the roar. Open kitchens, a chorus of clanging steel, added to the noise.

But the real leaders of the cut-the-noise counter-revolution became the restaurants themselves. When Monteverde opened in 2015, in Chicago’s restaurant-dense West Loop, it started playing with ways to calibrate sound.

“We use a variety of noise dampening methods and materials,” says owner Meg Sahs, “including heavy fabric draperies, fabric banquette seating and panels adhered to the underside of some table tops. The most effective method, though, has been the addition of sound-absorbing acoustical panels to the dining room’s ceiling. They go unnoticed visually, but once installed the echo of sound declined markedly.”

Monteverde, crowded every night, is now one of Chicago’s success stories. Its efforts to lower the din have become the growing template.