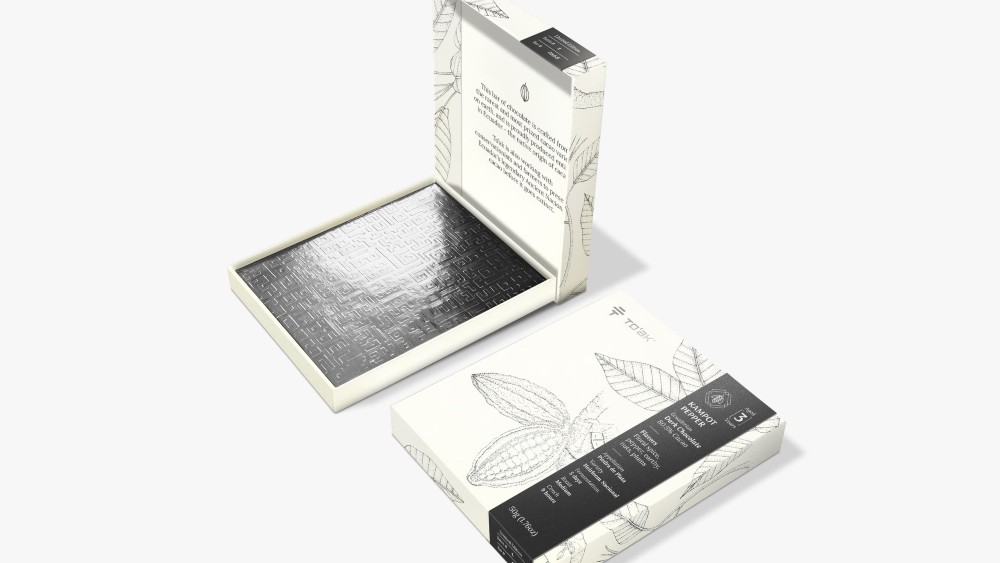 More than a century ago, Ecuador was the world’s largest exporter of cacao, with one native varietal in particular—nacional—serving as its calling card. Unfortunately, a fungal disease arrived in Ecuador in 1916 and started decimating the cacao trees, until the point people believed the varietal was lost entirely.

About 12 years ago, it was found again, deep in the rainforest. After confirming through genetic testing that nacional was alive and well, To’ak started using it to make chocolate from bean to bar, with a focus on expressing the terroir of the region. “Everything that To’ak is trying to do is to elevate dark chocolate onto the same level as the finest wines or whiskeys of the world,” says To’ak’s CEO James Le Compte. The company releases vintages like a winemaker would; in some cases, it even finshes them in casks like a scotch.

The remarkable bars were initially shipped in a handcrafted wood box with a 60-page booklet telling the story of the chocolate’s provenance. The most expensive editions even feature the work of an Ecuadorian. Each package was as carefully considered and crafted as the chocolate inside—a true special-occasion purchase. Eventually, repeat customers just wanted the goods. “They would get in touch with us and say, ‘Can you send me just the chocolate next time? I don’t need all of the special boxing and things like that.’ So we developed this new product line,” Le Compte says. That led to their signature bars, where they pared down the packaging while keeping the quality of chocolate at the same level.

My normal mode of chocolate consumption looks less like a sophisticated gentleman appreciating a snifter of brandy and more like Üter, the German exchange student from The Simpsons, stuffing his maw with treats. But To’ak expects you to act like the former instead of the latter. So I restrained myself and slowed down a little bit when I tried To’ak to savor the nuances of the bar.

Trying chocolate across different vintages, the flavors and textures of each year are actually quite distinct, from the floral and nutty 2015 to the more pronounced red berry notes of the 2017. My favorite bars were the cask-finished ones. I leaned toward the Sauternes, where you get a hint of the extracted fruitiness and residual sugar of the sweet wine. There are also bourbon, sherry and tequila casks, among others. If you can suppress your inner chocaholic long enough to savor a high-quality bar, you should get some To’ak.