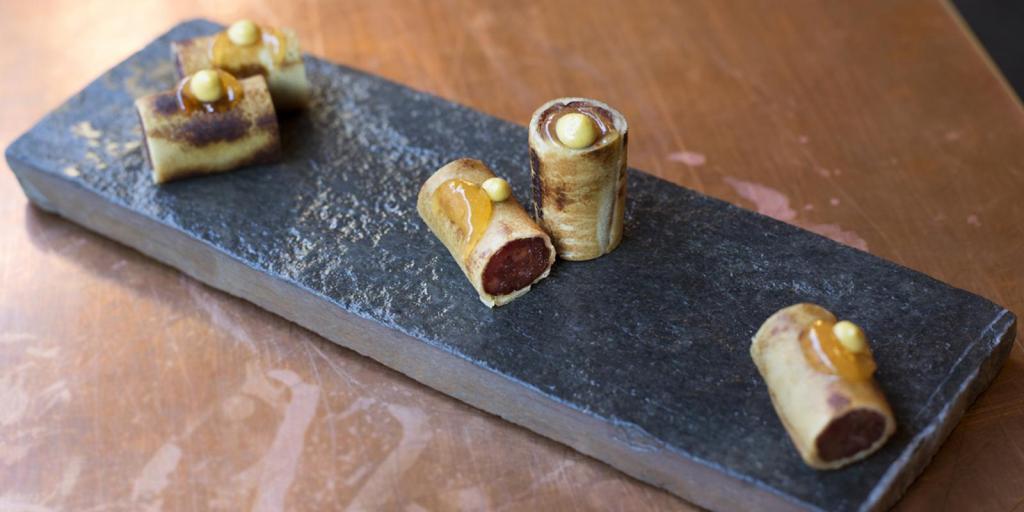 When El Bulli in Spain closed in 2012, many saw it as a death knell for modernist cuisine (FKA molecular gastronomy). The restaurant’s chef, Ferran Adrià, had become world-famous for pushing food to its limits, using chemistry-set items like agar, sodium alginate, and centrifuges to bend and tweak the world’s greatest ingredients. It was groundbreaking—and reportedly lost the restaurant a million dollars a month.

Meanwhile, lesser chefs across the United States were creating messy, crude riffs on Adrià’s work. You’d show up to a neighborhood bistro and be served a plate of foam for dinner. You’d eat it, mildly amused, then leave to go get some real food elsewhere. “Molecular gastronomy” became the culinary scene’s longest curse word.

In fact, it seems to have simply lost favor among underequipped chefs, which probably saved it as a genre. Done right, modernist cuisine is a precise balance between the hearth and the laboratory, between roasted meat and edible bubble baths. Dufresne has opened Alder in NYC, and some of the country’s best are still making scientific magic in their kitchens. Here are a few of our favorites.

Chef José Andrés cooked under Adrià, and is often credited with bringing his magic stateside. A meal at the 12-seat Minibar is a three-hour, 20-some-course feast of the imagination, whether it includes a “rubber duckie” made of dried apple meringue filled with foie gras ice cream, or noodles filled with pistou via syringe. There will be fogs and vapors and spheres. Chefs in the open kitchen play with their toys for your amusement and education. At the end of your meal—which can reach $600 per person with wine pairings—dessert is served in the adjacent, glammy little Barmini. The receipt comes in a Russian nesting doll. It’s like having tapas on Mars.

Grant Achatz is the U.S. face of molecular gastronomy, getting his start under Thomas Keller at the French Laundry and then reaching international acclaim with his Chicago restaurant Alinea. Located in the Fulton River District, Achatz’s other restaurant, Next, is unique in that its tasting menus have various themes, such as “Paris, 1906,” “Childhood,” or simply “Chinese.” And you can’t reserve a table: You buy nonrefundable season tickets. (Single-meal tickets, fiercely fought over, are available each day on the restaurant’s Facebook page). At Next’s recent “Tapas” menu, octopus tentacles rose out of a bowl through a foam made from the cooking liquid, like a monster emerging. There were patatas bravas with the fried chives and bravas sauce in spheres. Pork belly was served on charred oak with powdered alcohol so that it looked like a campfire. Alinea took the people’s choice in the World’s 50 Best Restaurants awards a few weeks ago; Achatz’s reputation is secured.

Wylie Dufresne—once an understudy of Jean-Georges Vongerichten—opened WD-50 in New York in 2003. His creations were mind-blowing right out of the gate: pizza served as tiny rocks, pickled beef tongue with fried mayonnaise, béarnaise ice cream, you name it. But as happens so frequently in NYC, WD-50’s building was sold for redevelopment and the restaurant closed. Thank god Dufresne had an ace in the hole with his more casual, small-plate “bar food” joint, Alder. His “pigs in a blanket” are sweet Chinese sausage wrapped in compressed hot-dog buns, deep-fried with mustard and duck sauce. Cocktails shine here, too, like Dave’s Scrip Pad—Old Overholt rye and Ramazzotti amaro with smoked maple syrup and yuzu. It’s the E = mc2 of bar food.

New Orleans is a food city steeped in history thanks to restaurants like Antoine’s and Arnaud’s. At Square Root, chef-owner Phillip Lopez takes his classical training under John Besh and Michel Richard into the future. There are only 16 stools at the bar. How about a muffuletta with a bun made of savory meringue, Calabrian chile-spiced pork salumi, wild-boar mortadella, and Tuscan olive salad? Or menudo with lime “cells” made with liquid nitrogen so they pop in every bite? We’ll try it all.

Chef-owner Dominique Crenn opened her restaurant as an ode to her father, a French politician and artist. No surprise, then, that her dishes qualify as art as well: Moss-covered branches will arrive at your table dangling with chewy carrot jerky, while apple cider is served in a sphere of white cocoa butter with crème de cassis. The tasting menu, which Crenn calls “poetic culinarian,” is 18 courses—and we’ll concede that with her two Michelin stars, she can call it whatever she likes.