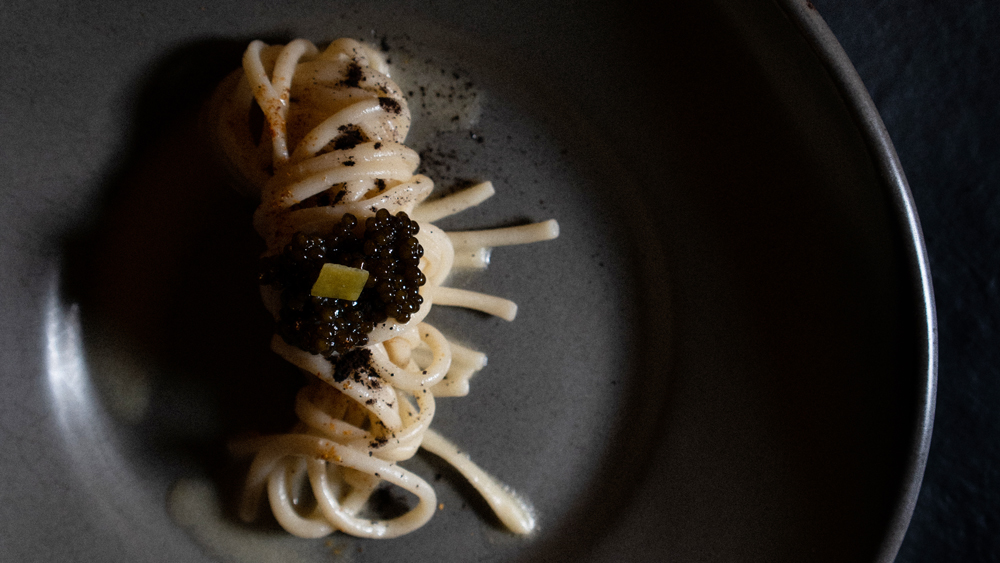 You wouldn’t expect to learn about desert life in the arctic, and you wouldn’t necessarily expect to study seafood in landlocked Tennessee. But a surprise education in sea life is what James Beard Award-winning chef RJ Cooper is delivering at his new tasting menu concept, Acqua, in Nashville.

“It’s a multi-course, avant-garde, modernist story about sea creatures,” he said. “We’re showcasing the best sea life and seafood in the most pristine manner that we can get in Middle Tennessee and presenting it in a palatable way that’s different, engaging and inspiring.”

At Acqua, which opened earlier this month inside the same building as Cooper’s Saint Stephen, the chef’s focus is on seafood—sustainable and mostly wild-caught—which he flies in from around the world every week. Then he manipulates them with coastal Italian flavors—citrus, olive oil, olives, Calabrian chiles—and molecular presentations for the multi-course affair.

“The story is how beautiful sea creatures and sea life can be, on a larger platform than the farm-raised fish you’re finding in the grocery store,” he said. “There’s a tremendous amount of education, creative inspiration behind each dish that we’re talking about. We think of it like, if you were to pull this out of the water on one of the Italian coasts, what would go well with it?”

The intimate, 32-seat restaurant is located inside the same building as Saint Stephen.  Amy Zawacki

The meal contains up to 16 courses, depending on what Cooper is able to source that week. Much of that depends upon Mother Nature; since farm-raised fish is avoided, weather patterns can determine availability. If there are storms in California, for example, no one is diving for echinoderms.

He puts together a wish list Sunday afternoon and sends it to his partners, finding out over the next two days what is and is not available. By Tuesday, everything is packaged and delivered to the local airport. The menu is not finalized until Wednesday’s dinner.

“The book hasn’t been written yet; every chapter’s a different week in which way we’re going,” he said. “It’s worth it. There’s a difference when you get seafood out of the water, put in a box and flown to you within 24 hours. We actually know what boats they’re coming off of; it’s nice to know the pedigree.”

This week, for example, Cooper is getting Dover sole from Iceland, sea urchins from Maine, Shigoku oysters and geoduck clams from Washington state, sepia (cuttlefish) from Italy, sablefish from Alaska, bluefin tuna from Spain and rock shrimp from the Florida Keys.

One dish he’s prepared is geoduck crudo, made with heirloom citrus and fermented Calabrian chiles. Another is a play on a Tuscan fish stew; the broth is crafted from octopus, clam juice, mussel juice and fish fumet, then reduced and blended with olive oil and chiles. It’s topped with a seared filet and a crunchy gremolata made of squid ink and dehydrated clam broth.

There’s also a signature pasta course, spaghetti alla Vaccaro. The pasta is made with kelp and burnt blood orange, then tossed in a burnt sepia stock that’s been thickened with oyster puree. Preserved Meyer lemon and Kaluga caviar top it off. And a meat course always wraps up the seafood meal before the cheese and desserts arrive.

“If you’re out on a boat, you have to come back to land once in a while,” he said. “It gives you a definitive richness at the end of eating all these seafood courses.”

This week he’s offering dry-aged squab with local heirloom corn polenta and a ragu made of Barolo, seaweed, huckleberries and the liver and heart of the squab.

“We’re not trying to reinvent the wheel, we’re just trying to push the boundaries of where the wheel can go,” Cooper said. “[Acqua] gives me another theater to create in.”