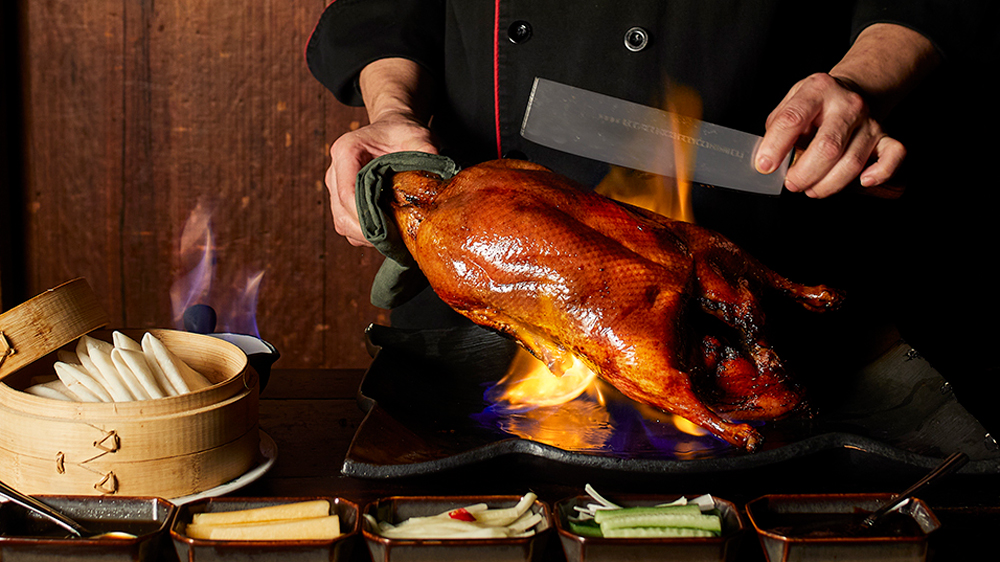 Back in summer 2020, my husband and I walked two miles to Chinatown to pick up dinner from Hwa Yuan, the Szechuan restaurant known for introducing New Yorkers to cold sesame noodles back in the ’80s. We must have been the first actual guests in weeks, maybe months. The manager, used to handing off bags to anonymous delivery drivers, cracked open a big smile and two bottles of Tsingtao for us to drink up as we waited.

We rode Citi Bikes back to our apartment, our spoils riding shotgun in the basket, and tore into those sesame noodles, a spicy cucumber salad, and a half Peking duck. The duck’s skin had lost its edge in the take-out container, but piling fatty slices of meat onto pancakes and drizzling hoisin with abandon was the height of pandemic joy.

In the last few months, I’ve been chasing that feeling—a dose of luxury that’s also warm and fun and uncontrived. Duck, my friends, is what lured me to dinner at Francie, Carne Mare and Hutong. (Because who is roasting whole ducks at home?)

Of course, duck isn’t new. In his first head chef gig, chef Chris Cipollone cooked at très French Auberge Maxime in Westchester, whose specialty was roasted duck with your pick of green peppercorn, orange or cherry sauce. “I saw how many ducks they could sell. That burned in my mind,” says Cipollone, who’s now chef and co-owner of Francie in Brooklyn.

Despite his training, Cipollone sorely underestimated the number of ducks he’d sell. Instead of one or two a night, his kitchen sends out 35. And because he ages the birds for 30 days (“That’s where the magic happens,” he says.), Cipollone actually had to expand Francie’s footprint to hold 450 carcasses at various stages of aging.

Is the duck paying for the added rent? “Sure,” says Cipollone. “We just hope you have a good bottle of wine with your duck.”

With so much care put into aging and sourcing the bird itself, a Rohan breed from the Hudson Valley, Cipollone just has to season it with salt, roast, rest and carve. (More complex preparations are reserved for the duck legs, removed before aging and transformed into duck mortadella, bolognese, saucisson and staff meal. “We eat duck every day,” says Cipollone.)

Francie’s duck is a sight, its cavity stuffed with a peacock-worthy plume of herbs and flowers (they spend $200 a week just on duck garnish), and Cipollone says guests revolt if he changed the accoutrement of creamy swiss chard, brown butter-apple-parsnip purée and spicy soppressata jam.

It’s an exceptional duck, a beautiful bird, but Cipollone is still trying to figure out how the dish became essential to the Francie experience. “I analyze it over and over. This restaurant was built in the pandemic, and once we got through that, we used the restaurant to transport people from that madness,” he says. “When you order the duck, it’s a celebration of something prepared just for you and your table.”

A Bacchanal Memory from Italy

Damn near the bottom of the menu, past the beet steak and gorgonzola-aged wagyu, is the restaurant’s sleeper hit: whole roast duck d’Ivan. “[Before opening,] I was going through my mental list of great Italian meat dishes and I knew I had to talk about Ivan somehow,” Carmellini says.

Twenty years ago, in the tiny Italian town of Fontanelle (population 630) just east of Parma, Carmellini spent “a magical night” at Hostaria da Ivan. He was dining with Italian cookbook author Faith Willinger, who introduced him to The New York Times food correspondent RW Apple and the couple running the restaurant and inn, Ivan Albertelli and Barbara Aimi. “The hospitality experience, it’s unrivaled,” says Carmellini, who has returned for several epic meals. “We don’t leave until 1 or 2 in the morning. It’s a bacchanalia of an event.”

Among the most memorable dishes at Hostaria da Ivan is the roast duck “cooked all the way through, Italian style,” according to Carmellini. “The preparation is less about being at the culinary edge of sous vide perfection, as opposed to very delicious cooking.”

For his ode to the dish at Carne Mare, Carmellini’s team ages ducks one to two weeks, roasts them whole until the breast is medium rare and removes the legs, which continue to confit while the breast rests. It all takes about an hour to cook before traipsing into the dining room on a silver tray, accompanied by chicory salad, fortified duck jus, potent mostarda and roasted potatoes. It’s an honest duck that hits all the comfort notes, something you could graze on for hours in the company of friends with a grand bottle of wine.

“It’s not our biggest seller,” Carmellini says, “but it’s a dish we’re super proud of.”

Scarcity is built into the duck model at Hutong. The opulent Hong Kong-based restaurant took over the former Le Cirque space in Midtown in mid-2019, serving Northern Chinese cuisine with prices to match the neighborhood. Peking duck has always been a menu anchor, but last September, to celebrate the restaurant’s reopening, it introduced fire to the presentation, available to five tables a night with advance reservations.

Chef Martin Mak, who has worked in Chinese barbecue for 50 years, came out of retirement to develop the dish in 2018 after the group noticed Taipei chefs setting their ducks aflame, and it’s now available in New York and the restaurant’s new Miami outpost.

Midway through a bottle of English sparkling wine and just after the last of our rosé Champagne shrimp dumplings had been eaten, Hutong’s not-yet-flaming duck arrived tableside. (First, though, a server brought out napkins to line the floor. This duck, it turns out, will squirt.)

The kitchen team air dries the bird for 36 hours and seasons it with green Szechuan peppercorns, star anise, black pepper and chile paste, before roasting, resting and wheeling out its burnished carcass into the dining room. Onto a metal tray goes Chinese rose wine and high-proof rum, which with a spark, turns into an electric blue bath of fire. Grasping the duck from behind, a cook swirls the bird round and round through the flames for 30 seconds, sending up a sweet, meaty aroma and further crisping the skin.

Carved tableside, the breast meat is juicy with a whisper of citrus and heat, and we piled fatty slices onto pancakes with papaya, scallions and cucumber. The cook took the legs back to the kitchen, chopped them up, and sautéed them with green beans—all presented with crunchy, refreshing, unpretentious iceberg lettuce cups to close out the meal.

It was a show, sure. Diners at nearby tables stopped to gawk. We all whipped out cell phones to capture the spectacle. But we ate every morsel. There were no take-out containers to take the edge off a fabulous night out.