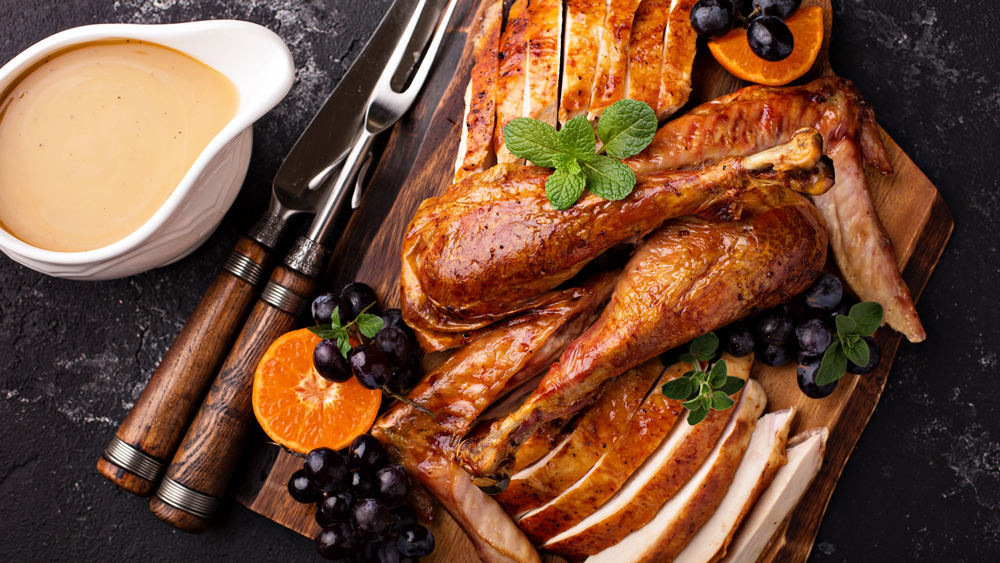 Corey Lee is not a big turkey guy. At Benu, his Michelin three-star Korean restaurant in San Francisco, poultry is rarely on the menu, and the same is true for his home kitchen.

“I almost never cook turkey outside of Thanksgiving,” he said. “I enjoy the flavor, but the size makes it a bit impractical outside of a gathering at home with a larger group of people for a special occasion. Also, it’s not easy to find a good, fresh turkey, unfrozen, at other times of the year.”

And when he does bring the large bird home for the holiday, he uses some rather unorthodox cooking methods to get it just right. Robb Report chatted with Lee—whose San Ho Won was our Best New Restaurant of the Year—about how he cooks the perfect turkey at home, from picking out the best bird to keeping it warm for serving. Here are his top tips and tricks for doing it yourself.

How to Source Your Bird

If it were up to Lee, the former head chef at the French Laundry, he’d swap out a Thanksgiving turkey for a Thanksgiving quail raised by Brent Wolfe at Wolfe Ranch in Vacaville, Calif., who has been the preferred supplier of Thomas Keller and Alice Waters since the 1980s.

“[It’s] my favorite poultry in the world,” Lee said. “The combination of flavor, texture, size and fat makes it one of the most delicious products you can eat.”

However, if he is on “turkey duty,” as he calls it, he prefers a fresh, not frozen, heritage turkey, which is usually raised free-range on a small American farm. These breeds, such as Narragansett and Bourbon Red, develop slower than conventional birds and do not grow as large. But they are considered to have a more concentrated flavor and be more authentic to the Thanksgiving tradition.

“I prefer the breast to leg ratio of the heritage breeds and I think they taste better, too,” Lee said. “I also like the idea of eating a bird that’s more related to the kind of turkey that the pilgrims and early settlers ate.”

Prepare Your Turkey at Least 8 Hours Ahead

Before you do anything, you’ll want to pull out a sharp knife. Because Lee prefers to—gasp—pre-carve the bird before roasting.

“If you want that photo of a whole roasted turkey, my method is not the way to go,” Lee said. “But my way ensures evenness in the cooking and also cuts the time in half.”

While he’s particular about his at-home technique, his knife of choice is a bit less precise.

“I don’t really care [what knife] I use at home,” he said. “It doesn’t really matter. I can make it work. I don’t have the loyalty to my tools at home as I do at work.”

At work, he prefers a carbon slicing knife a friend of a friend in Kyoto, Japan, made for him. For heavy-duty, utility work, he reaches for his stainless steel Misono knives, which are also manufactured by hand in Japan, but are easier to care for than carbon blades.

“It’s kind of funny, because when I was a young cook in my early 20s, I saved up and bought this precious knife … It’s this thing that’s very important to you,” he said. “And then later in your career, when you actually use a knife the least, people just start sending you knives. I have all these samples of knives—I don’t even know the names of some of them—I bring them home and use them and they’re great.”

To prep the bird, he first separates the legs off, and then cuts away the back, leaving the breast (breastplate attached) and wings. Then he soaks the pieces in a brine (water, 5 percent salt, 1 percent sugar, garlic cloves and onion) for eight to 10 hours in the refrigerator, depending on the size of the bird.

When he’s ready to cook, he removes the bird from the refrigerator and brings it to room temperature, which could take about an hour. This helps the poultry cook faster and more even. Next, he makes a few more cuts up the back of the bird, creating smaller pieces.

The Most Effective Way to Roast Your Turkey

Lee would rather be serving quail for Thanksgiving.  Photo: courtesy Benu

At his restaurants, Lee uses Hestan cookware, which is handmade in Italy from molecular titanium. And this fall Hestan also released a new collection of tri-ply, warp-resistant roasting pans and sheet pans that would fit the bill nicely. But he believes any heavy-gauge steel roasting pan will work for home use.

“You want something thick enough that it’s not going to buckle,” he said. “You’re cooking something at relatively high temperatures for a long time, so, if it’s not heavy-gauge steel, it’ll buckle and over time you’ll have a warped pan that browns in one area and burns in another.”

At home, Lee chops up enough celery, onions, garlic and carrots to completely cover the bottom of the roasting pan. He lays the legs, skin side up, on top of the vegetables and begins to cook them in a 300-degree oven. After about 1 hour, he adds the breast and continues cooking it for another hour or so.

When he feels the turkey is about halfway cooked, he raises the temperature to 400 degrees and cooks it for about another hour until golden brown. During this step, he bastes the turkey every 15 minutes with softened, unsalted, organic butter from Clover Sonoma or Straus Family Creamery, which are higher in fat than average grocery store butters.

The bird is ready when the breast reaches an internal temperature of 165 degrees and the thighs reach 175 degrees.

How to Finish and Serve

When the turkey has finished cooking, Lee removes it from the oven, lightly covers it with aluminum foil and rests it someplace warm—warm enough so the bird won’t need to be reheated, but probably not in the oven.

“Usually when it’s Thanksgiving, the stove is in pretty high demand,” he said. “You’re waiting to take the turkey out so you can put in the baked potatoes, or whatever. So, if you’re kitchen’s set up where you have some shelves above your stove, that’s the best possible area to keep it.”

He rests the bird for at least 30 minutes before serving, allowing time for the juices to redistribute throughout the meat. While he waits, he makes a gravy in the roasting pan. He adds a bit of stock to the pan to deglaze it, and combines all of the drippings, butter and caramelized vegetables into a rich sauce, which he then seasons with salt and pepper.

When he’s ready to eat, he lays out his holiday spread and sets the table with Pott flatware, the same German-made cutlery he uses at his restaurant.

“The machining is unbelievable—they make some museum pieces,” he said. “It takes about 100 steps to make a regular knife. But, again, you can use anything. The only reason I have them at home is because we use them at the restaurant. It’s a nice set I only use for special occasions like Thanksgiving.”