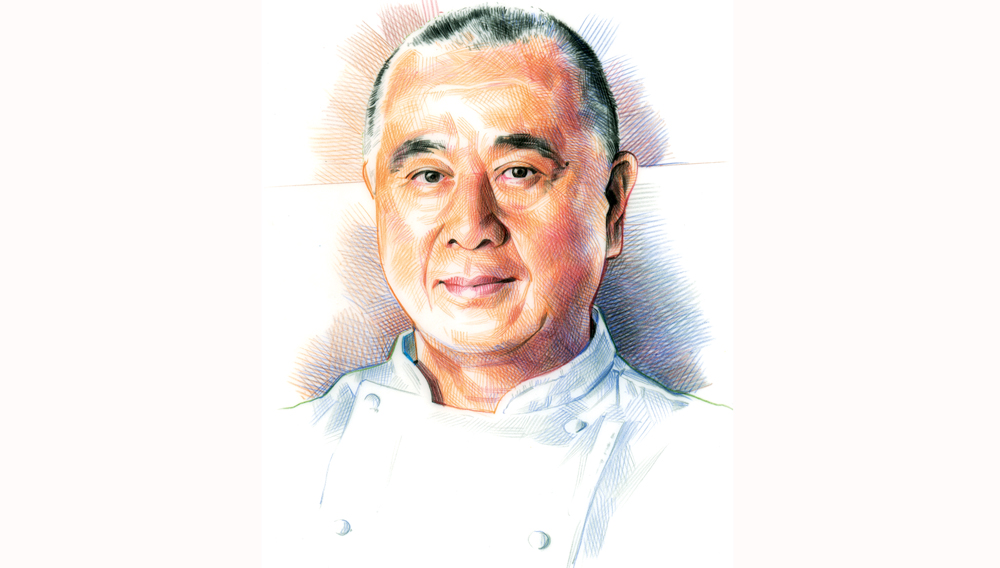 A conversation with the celebrity chef, restaurateur, and hotelier.

Since opening his first restaurant in 1987, the chef known simply as Nobu has cooked up an international empire that today spans 38 restaurants across five continents, hotels in Las Vegas and the Philippines, partnerships with Crystal Cruises and VistaJet, and more. The James Beard Award winner has also ventured beyond hospitality, taking brief acting roles in such films as Casino, alongside his business partner and longtime friend Robert De Niro. Robb Report caught up with the 66-year-old sushi master at his Nobu Hotel at Caesars Palace to discuss his passions for food, travel, and the arts.

What are some of your favorite destinations and cuisines?

Los Angeles is my home right now, but I was born and grew up in Japan, where I now have two homes. I go every month to Tokyo, where they have the biggest, best fish market in the world, Tsukiji. It has a lot of nice sushi restaurants that seat just six or eight people and serve the chef’s choice, which is the best fish of the day. I also really enjoy other Asian cuisines, like Chinese food, as well as Spanish food, and Italian food. It was actually because of Italy that I started using olive oil in my sushi. I have a home in New York, too. It’s a very exciting city. Sometimes I go to New York just to wake myself up, and after a week or 10 days, I return to Los Angeles.

In the 1970s, Peru strongly influenced your culinary identity. How do your intercontinental travels inspire you today?

I travel all over the world visiting my restaurants, and wherever I go, I like to go to the fish market and the local markets, because each country and each city has its different food cultures, products, and vegetables. When I see something different and interesting, I bring it back to the kitchen and start to create. Because cooking is my whole life, it’s what I am always thinking about.

What do you do when you have a day to yourself?

Because I travel about 10 months out of the year, I like to stay home. I wake up, exercise, lie down, and do nothing—not even read a book. I like to just look out onto nature, listen to the wind and trees, breathe in the fresh air, and not see anybody, except my wife. My home in Japan has a natural hot spring. I also love to play golf at the Bel-Air Country Club when I’m in Los Angeles.

Speaking of Southern California, tell us about the new hotel you are building down the street from our Malibu office.

Maybe October or November will be the Nobu Ryokan’s opening. It only has 17 rooms because of its ryokan concept. Each room will have a square Japanese hot bath, with pouring water that overflows, and of course the ryokan food and service. When there are over 300 rooms, it is very difficult to provide the perfect food and service, but with only 17 rooms, we can pay more attention to the details.

Are you passionate about any art forms beyond the culinary arts?

I like art pieces, particularly more contemporary, colorful ones, which I started collecting about 20 years ago. I have more than 20 pieces, including ones by Romero Britto, KAWS, Wes Lang, and Craig Alan. When I see a painting, I see the artist, and I like to get a sense of their passion from them. One day, when I have more time, I too want to paint.

If you could choose your last meal, what would it be?

This is no choice. My answer will always be sushi. I started working when I was 18 years old; being a sushi chef was my dream, and I did it. I cannot live without sushi, which means it will have to be my last supper.