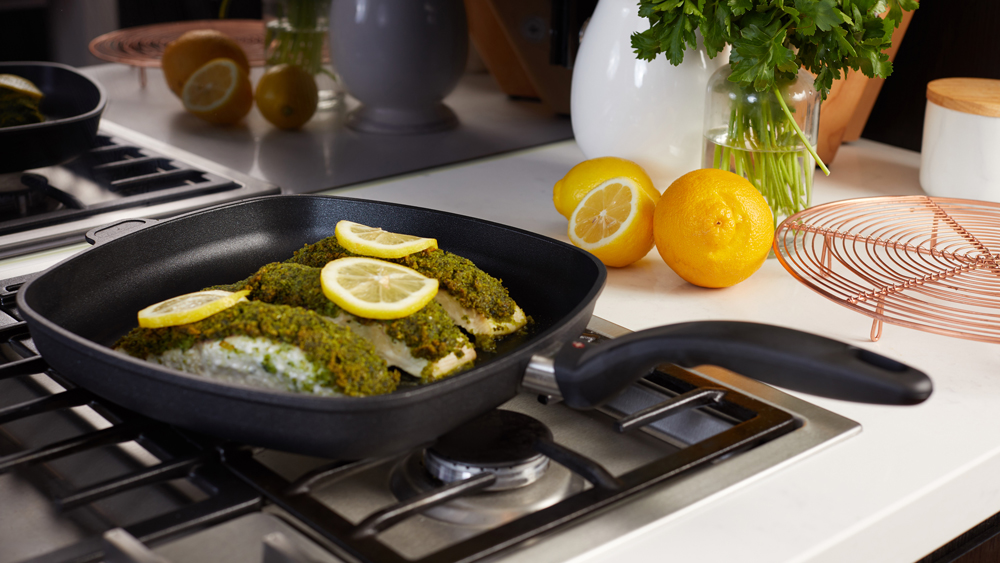 Nonstick pans are fickle creatures. Unlike my trusty cast iron skillet that can take so much abuse I’ll probably be able to hand it down to my son, or my stainless steel pans that have been going strong for nearly a decade, nonstick pans have been generally disposable in my hands. I’m not alone.

Though they’ve certainly improved compared to the Teflon coatings of the past that ran the risk of flaking off, there are still some serious limitations to most nonstick pans. To protect the coating, you can’t get them too hot, generally can’t transfer them from range to stove and can’t be too aggressive with your utensils. Even with expensive versions I’ve had in the past, I’ve watched them quickly lose their nonstick properties.

All that is to say, I’ve been pleasantly surprised by Swiss Diamond’s cookware. I’ve put the 11″ square frying pan through its paces the last few months, swapping it in for my pricier nonstick pan.

Out of the box, the surface—made with actual diamond crystals in the coating to take advantage of their strength, heat-conducting qualities and natural nonstick properties—was more nonstick than most pans I’ve used. And even as I’ve put the pan through the rigors of a frequent home cook, the nonstick has remained superior, with a fried egg cooked yesterday releasing pretty much as well as the first day I had the pan.

Beyond nonstick, there were other advantages over other cookware in its class I’ve tried. Not only was I able to crank up the heat on the pan to get a better sear when I wanted one, but the pan’s cast aluminum core also conducted heat evenly to the edges of the square pan. It was durable enough to withstand going straight in the oven for those times I wanted to sear and then roast. That allowed for some welcome versatility. One day I’m cooking pancakes evenly over low heat, the next I’m searing chicken breast and finishing it in the oven. I think I’ve finally found a nonstick pan worth the money.