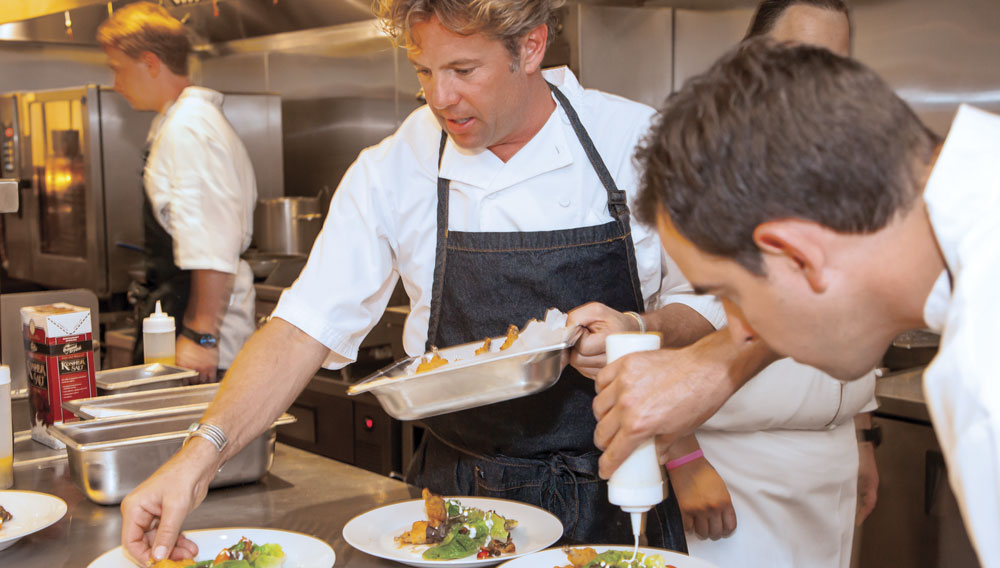 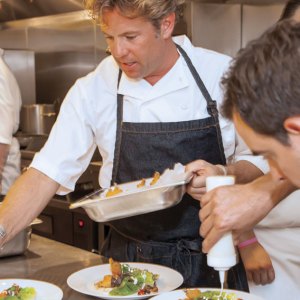 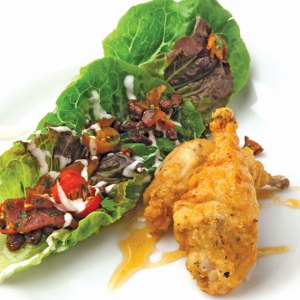 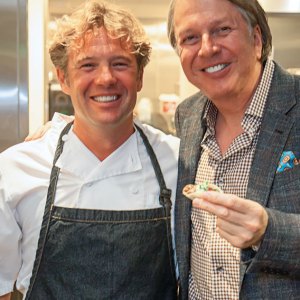 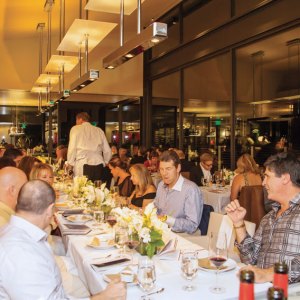 With a “good little menu” chef Nick Badovinus puts his brand on modern Texas cuisine. To view each chef’s full competition menu and recipes—as well as additional photos and videos—go to robbreport.com/culinarymasters.

“We’ll never be the edge of the wedge,” chef Nick Badovinus says as gallons of grits bubble on the hotel kitchen’s range. “That’s not who we are. And we’re not going to win. But we are going to have fun tonight.”

Badovinus, the charismatic chef and owner of the four Neighborhood Services restaurants in Dallas, is in the thick of preparations for the third annual Robb Report Culinary Masters Competition. As the grits simmer, slivers of shaved ham and a bowl of pimiento cheese spread sit on the counter, waiting to be assembled into appetizers. Three of his cooks attend to other elements on the menu, including Voodoo Sauce, a concoction he learned from Emeril Lagasse that involves cooking down a gallon of Crystal hot sauce and a gallon of Worcestershire sauce into a potent, eye-watering base. “It might be used as Louisiana embalming fluid, too,” Badovinus jokes.

The mood in the kitchen is so loose, the menu so familiar and nostalgic, it seems impossible that this is Badovinus’s first culinary competition and that in a couple of hours, he will be serving a five-course meal to 55 judges at the Ritz-Carlton, Rancho Mirage, in Southern California. Badovinus is one of five rising stars vying for the title of New Culinary Master for 2015. Every year, Robb Report assembles a panel of renowned master chefs and challenges each to name the culinary world’s most promising newcomer. This year’s panel—David Bouley, Dean Fearing, Pierre Gagnaire, Nancy Oakes, and Wolfgang Puck—singled out chefs from San Francisco to Los Angeles, Tokyo to the South of France. One of these chefs has already earned a Michelin star and almost all of them work in a culinary idiom that involves liquid nitrogen, tweezers, foraging, or all of the above.

Almost all of them. Badovinus—as he explains, while “feeding” the grits with butter and agitating them to build a velvety richness—is more concerned with what he calls “everyday food” and stirring emotions at the table. “You cook for your audience,” he says. “So we gravitate to the naturally big and robust flavors.”

Badovinus’s competition menu aims for the bull’s-eye of pleasure, with such dishes as pan-fried quail legs paired with a tangy buttermilk-ranch salad, and a steak so intensely beefy it is an ode to Texas itself. Badovinus and his team arrived three days earlier, lugging containers filled with ingredients from his home state—“specialty stuff that’s more reflective of what we do in Dallas today,” he says. His Texas pantry includes fresh stone-ground grits from Homestead Gristmill in Waco and a creamy 4-year-old cheddar from Veldhuizen Texas Farmstead Cheese in Dublin. But the ingredient that confers the most bragging rights is the 28-day dry-aged Rosewood wagyu beef, from a ranch near Dallas. Badovinus will serve the beef in his fourth course: towering 3-inch-thick tenderloins with Voodoo Sauce in a rowdy spin on steak Diane. “Rosewood beef has a really, really delicate texture, and super, super flavor,” he says. “Wagyu is usually a little ribald—overly fatty, just not quite beef—but this is phenomenal.”

Across the prep table, one of his chefs is working on the dessert, using a pastry brush to gently whisk away the crumbs from a batch of pink sugar-wafer cookies—apparently a high-flown remake of a childhood favorite. But Badovinus is surprised by the notion. “No!” he says. “At $2.16 a pack, who can make them any better?” Indeed, the cookies came from a grocery-store aisle: a huge gamble in a serious culinary competition, but one calculated to add a fun twist to his elegant butterscotch pot de crème. Plus, the wafers do remind Badovinus of his childhood.

“Food is like that. It has a romanticism to it that is not all about being on the edge of the wedge,” he says. “Romanticism, and a connection to people—that’s the secret sauce for us. I believe that tapping into the past is equally as powerful as looking toward the future.”

Badovinus, 44, was born in Bellevue, Wash., and studied at the Western Culinary Institute in Portland, Ore. In 1996, he was looking for his first job when his father, who was the CEO of Acme Boots, contacted a friend at the Lucchese Boot Company. That led to an interview with Fearing, a pioneer of Southwestern cuisine in the 1980s who was then chef at the Rosewood Mansion on Turtle Creek in Dallas. Of course, Fearing is also a famous wearer of Lucchese boots.

The two hit it off, and for several years Badovinus worked closely with Fearing, absorbing his bold-flavored aesthetic and customer-first philosophy. When Badovinus struck out on his own in 2008, in partnership with his father, he departed from Fearing’s more formal style and opened restaurants for “everyday eating, rather than special-occasion eating,” he says. He is now part of a new generation of Dallas chefs who are expanding on Fearing’s ideas, with a second wave of Texas cuisine that puts local ingredients front and center and with regional styles such as cowboy cooking, Tex-Mex, barbecue, Hill Country German, and Gulf Coast seafood. Badovinus has been nominated for two James Beard Foundation Awards, won acclaim from local critics, and begun to build a restaurant empire that would add its fourth Neighborhood Services 15 days after the competition.

“That’s a direct result of a hands-on operation and, you know, personal energy,” he says. “Our food will never be the most progressive. It’s an act of caring about somebody, of feeding somebody. Food facilitates interaction—it isn’t the interaction. It’s ‘care about me’ rather than ‘dazzle me.’ ”

But of course, there are 55 judges waiting to be dazzled on this warm October evening in the California desert. The Coachella Valley glows in the fading light as Fearing takes the microphone to introduce his protégé. While many talented chefs have passed through Fearing’s kitchen, he did not hesitate when choosing Badovinus as the best up-and-coming chef. “His vision was always apparent,” he says. “Nick is the 100-point chef.”

With that, Badovinus literally serves up a tribute of his own: his version of Fearing’s famous tortilla soup. “Somewhere between a rip and an homage,” Badovinus teases. The soup has been reproduced so many times, it is hard to imagine that it will excite the judges. But Badovinus’s version is a revelation: brick red and layered with flavor, from the dark, sun-dried taste of the chilies to the wisps of maple syrup and lime juice to the final kick of heat. The master is pleased. “I’ve been making tortilla soup since 1981,” Fearing says, “and this is so complex with flavor. This is a real Texas-style dish.”

For his second course, Badovinus transforms Texas quail by serving just the legs, fried in a lightly spiced batter, with a salad of crisp little-gem lettuces, bacon, and a light buttermilk ranch dressing. A garnish of “angry pecans”—the chef’s term for his terrific spiced pecans—links all the elements together. The judges devour the course, picking up the quail with their fingertips, and a buzz begins to build.

Next Badovinus brings out his spin on shrimp and grits, taking what he considers a perfect dish in a fresh direction by substituting a single seared scallop for the shrimp and Spanish chorizo for the bacon. But it is those grits that push the dish into the stratosphere—creamy, nuanced with aged cheddar, and tasting more like fresh corn than anything that has seen the gristmill.

The steak, as promised, astonishes with its flavor and also benefits from the best wine pairing of the competition: the 2004 Vérité Le Désir, a richly spiced Sonoma County Bordeaux blend.

Then it is time for Badovinus’s big gamble: dessert. “It’s a basic butterscotch custard,” he says, explaining the pot de crème, “but, you know, we bump the booze up.” It is embellished with a flimsy wooden ice-cream spoon and those pink sugar wafers.

The Robb Report Culinary Masters judges are a rigorous lot, given to tough scores and analytical comments. But Badovinus’s menu—particularly dessert—inspires rhapsodies. “The excitement of an ice cream truck in the summer,” Dana Farkas writes. Gianna Drake-Kerrison says, “I’ve been transported back to my childhood in N.Y. . . . What a treat to eat the two cookies and reminisce.”

It is precisely the emotional response the chef predicted. And a dinner built on big flavors, dishes with a history, and impeccable ingredients and technique—or, as the chef puts it, “a good little menu”—earns Nick Badovinus the title of New Culinary Master for 2015.