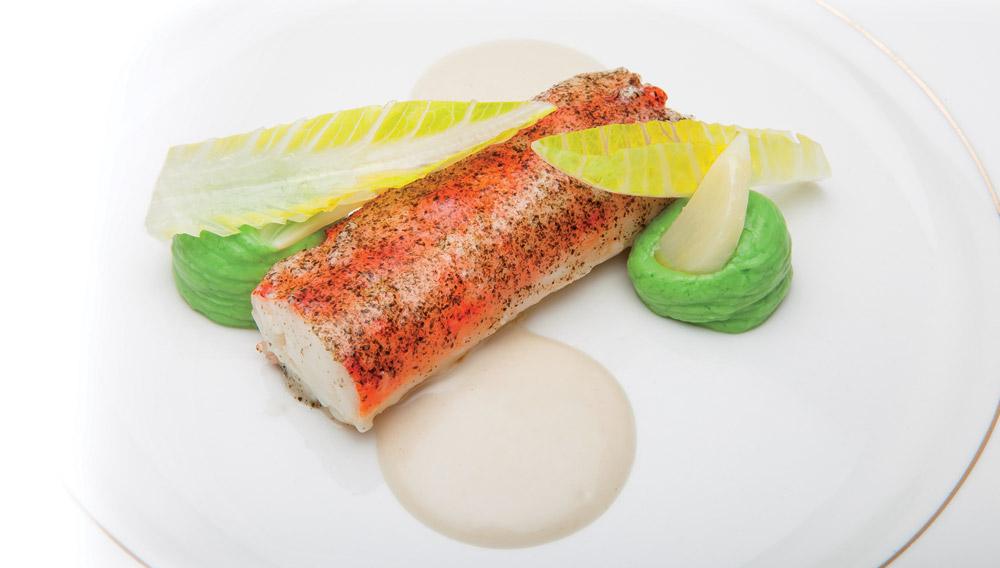 When chef Thomas Keller, America’s high priest of haute cuisine, raises an eyebrow over an item on a menu, most young chefs scurry to change it. Last summer in Southern California, Keller’s eyebrow arched over a course of Ris de Veau Panés—crisp sweetbreads, topped with a fricassee of escargot—on the menu of a young chef named William Bradley. “I questioned his use of sweetbreads—this is L.A.,” Keller said diplomatically. “I got a lot of flack for that one,” Bradley recalls, more vividly. “But I just told him we have to do it. I love sweetbreads, I love to cook them, and I think people are going to like it.”

Bradley—the director and executive chef at Addison, a restaurant at the Grand del Mar resort in San Diego—not only kept the dish on his menu, but he made it the centerpiece of a five-course meal he served to 60 judges at the Robb Report Culinary Masters Competition, an annual event in which he pitted his talents against some of the top up-and-coming chefs from around the world. He had a meticulously conceived plan: He had put together an exciting progression of courses, each building on the flavors of the last and growing richer and more complex as the dinner moved forward. He began with two canapés, one warm and one cold: beautiful warm gougères made with aged sherry, and crisp Kumamoto oysters garnished with a horseradish mousseline, caviar, preserved lemon, and a flake of gold leaf. His first course awakened the palate with a bright, acidic chilled tomato-and-fruit soup, and the next courses offered ravishing riffs on familiar favorites—a Caesar salad with Alaskan king crab, followed by a luxurious corn soup with bacon, black truffles, and chanterelles. By the time diners reached the risky sweetbreads course—crunchy, earthy, with a sauce bolstered by red wine, parsley, and Parmesan—they would be ready for it.

“I want to showcase my style of cooking, to focus on simplicity and allow the ingredient to be the center of attention,” Bradley said during the preparation of the meal. Even Keller had to admit, “When he is committed to something, you can’t change his mind. I admire that.”

Bradley was Keller’s nominee in the second annual Culinary Masters Competition. In 2013, Robb Report assembled a panel of five master chefs and asked them to name the most exciting emerging culinary artists in the world. Each nominee was challenged to create a five-course meal that showcased his talents and culinary philosophy (see page 102). The dinners were served to  60 Robb Report readers and editors, who evaluated each course on such factors as presentation, originality, execution, and overall deliciousness. Each event—which took place either last summer in Los Angeles or last fall in New York City—also benefited a charity of the attendant master chef’s choosing. The competition involved no catches, restrictions, or special requirements: The aim was for each chef to represent his vision within the parameters of a single meal and, most importantly, to celebrate the rising stars of the culinary world and assess the future of fine dining.

Bradley’s dinner took place on a late summer evening, beneath the sprawling 120-year-old Moreton Bay fig tree at the Fairmont Miramar hotel in Santa Monica, Calif. He and his crew arrived at 9:30 in the morning and began briskly unpacking a 24-foot refrigerated truck filled with the components for the evening’s meal. It was the culmination of six months of planning, Bradley said: “Anyone can put a pen to paper and write a menu, but how it’s organized and executed is what makes the difference.”

Two months before the dinner, Bradley made the 250-mile round-trip to the Miramar to scope out the dimensions of the room he would be cooking in, so that when he arrived on game day, he knew exactly how he would set up his kitchen. Before that, he had done countless test runs of each dish. The oysters, for example, were originally garnished with a yuzu granité, but it chilled them too fast. A cucumber gelée had “no staying power,” he said. Finally, he hit on the idea of complementing the sweet Kumamotos with an unusual horseradish mousseline. A touch of caviar boosted the bivalves’ briny flavor, and a dusting of preserved lemon made it aromatic. The result was a single, perfectly clear, refreshing bite that presented diners with a small gustatory gift.

Bradley, 38, began cooking at the age of 16 at a small Italian restaurant in San Diego. “I loved taking the product and turning it into something that makes people happy,” he said. “And if you cook something that people enjoy, they will be happy.” His career included stints in hotel restaurants, including Mary Elaine’s at the Phoenician in Scottsdale, Ariz., and he grew to appreciate the rigors of the French kitchen, particularly the structure of the culinary brigade. His idols are the pillars of haute cuisine: Fernand Point, Alain Chapel, Alain Ducasse, Frédy Girardet—and of course Keller. “I never worked for him,” Bradley said, “but I did a five-day stage at the French Laundry. It seemed like five months.”

In 2006, Bradley returned to San Diego to open Addison, the opulent 18-table restaurant at the Grand del Mar. “It’s all still incredible to me,” he said as he instructed his cooks to drape long white linens over the prep tables in the competition’s makeshift kitchen, ensuring that the back of the house looked as elegant as the front. Professional stoves were set up outdoors, and a cook was briskly making enormous pots of beurre monté, whisking 20 pounds of butter to form a rich poaching medium for Bradley’s Alaskan king crab. Another chef was clarifying butter to sauté the sweetbreads. A third was packing more butter into cups for table service.

Keller first ate Bradley’s cooking in 2010, when he was in San Diego on a promotional tour for his Ad Hoc at Home cookbook. “I felt it the first time I walked into his kitchen,” Keller recalled: “It’s a sense of confidence, knowledge, and respect. You walk into William’s kitchen and see all of this: the organization, the cleanliness, and the soul. He cooked me a piece of bass with crispy skin—and OK, crispy skin, what’s the big deal? But there’s a certain specific technique that requires a dedicated amount of attention. His was one of the most crisp, perfect pieces of fish I’ve ever had.”

As the sun began to set, and chandeliers twinkled from the branches of the fig tree, the first judges gathered on the secluded patio. Flutes of Dom Pérignon 2004 were poured. Trays of oysters and gougères were passed and greedily devoured. That first course, which Bradley called Jardin de Fruits, celebrates the bounty of Southern California, he explained, with plump raspberries, melon balls, Champagne grapes, tomatoes, and tiny basil leaves tumbled into a bowl. (In fact, each item had been carefully counted to achieve the proper balance of flavor.) At the tables, the waiters poured in a precise amount of the clear, chilled tomato consommé.

The second course was built around a single cylinder of crabmeat—pink, dense, and glistening. Bradley knew he wanted to serve Alaskan king-crab legs—one of Keller’s favorite ingredients. He decided to poach them in beurre monté, a technique recalling Keller’s famous butter-poached lobster. Next, he considered what would go well with the crab without playing against it. “I wanted mild ingredients,” he said, and thought of an avocado puree for richness and leaves of baby romaine for crunch. And then it hit him: “This is a dish that had already been done, highly flavorfully and successfully.” It was the shrimp Caesar salad he grew up eating in San Diego. “It was my go-to dish, just hold the croutons,” he said, laughing. He held these again this time, finishing the dish with just a pungent anchovy sauce and a single sliver of poached garlic. Sweet, buttery, luxurious, and crunchy, it was the dish of the evening and, as it turned out, of the entire Culinary Masters Competition. As delicious as many other dishes were on every competition menu, none would surpass the scores awarded to Bradley’s Alaskan King Crab, the dish that sealed his victory as the New Culinary Master.

Special Thanks to Our Sponsors