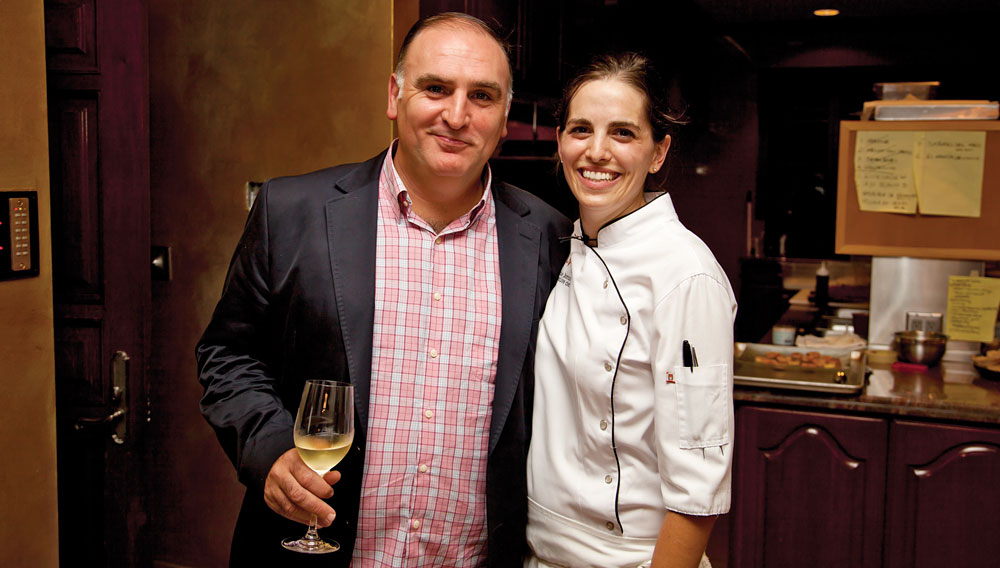 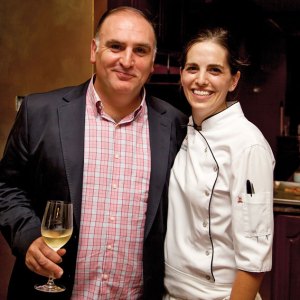 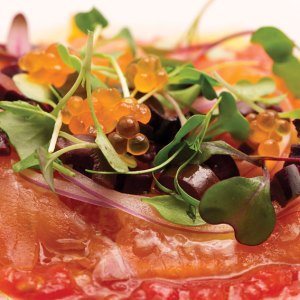 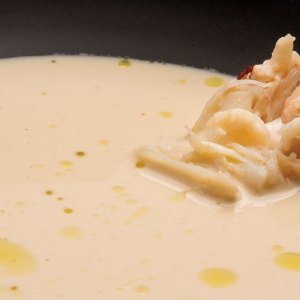 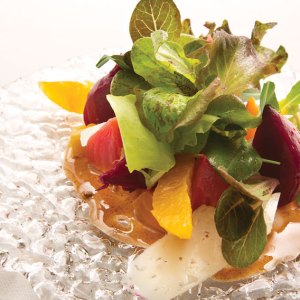 Katie Button called herself “the underdog,” and it was hard to argue with that. She had been a chef for just 18 months, all of them at the helm of Cúrate, her modern tapas restaurant in Asheville, N.C. In six hours, she would be serving a five-course meal to 50 judges participating in the Robb Report Culinary Masters Competition, pitting her skills against those of chefs with years of experience in top restaurants around the world.

Button had never entered a culinary competition before. “This is my first,” she said, dashing from the lusciously marbled Ibérico pancetta crisping in her only oven (the other two had malfunctioned) to the walk-in freezer (where she stood in the cold and unmolded hundreds of frozen spheres of cherry puree to keep them perfectly round) to the range (where multicolored baby beets—located at the last minute—were on a steady boil, destined for a salad that would transform the diners’ concept of what the common beet salad could be). Something remarkable was coming together, and she knew it.

Button was one of five young chefs vying for the title of New Culinary Master. For the first installment of what will be an annual event, Robb Report assembled a panel of celebrated chefs last year and challenged them to name the most talented rising stars in the world. Their nominees, announced in the October issue, were exciting and diverse: Matt Abergel of Yardbird in Hong Kong, who was chosen by Masa Takayama; Dante Boccuzzi of Dante in Cleveland, chosen by Charlie Palmer; Gavin Kaysen of Café Boulud in New York, chosen by Eric Ripert; Mourad Lahlou of Aziza in San Francisco, chosen by Michael Mina; and Button, who was nominated by José Andrés.

The idea was not only to identify the top emerging chef but also to provide a genuine assessment of the future of fine dining and haute cuisine. In an era when chef competitions are a television staple—sweaty ordeals in which the participants cook against the clock using an assortment of bizarre ingredients—Robb Report challenged each nominee simply to prepare the five-course meal that best showcased his or her talents. Each dinner was served to a panel of 50 readers and editors, who awarded points based on criteria that ranged from presentation and technique to originality and overall deliciousness. The events, which took place last fall in Los Angeles and New York City, each benefitted a charity of the master chef’s choice (for full details, go to www.robbreport.com/culinarymasters). Only after the last dinner was served would the scores be tallied and the New Culinary Master be named.

For Button, whose competition dinner was held in Beverly Hills at Beverly House—the 50,000-square-foot pink stucco home built in 1927 and later owned by William Randolph Hearst—there were no shaky nerves or false steps. Her menu effortlessly crossed the cultural distances between North Carolina’s hill country and the Catalan coast, reinterpreting Spanish classics and inventing new dishes along the way.

“I really wanted to do a menu that was about Spain but also represented me and my background,” said Button, who gave up a fellowship in biomedical engineering to dive into the culinary world. Her short but intense career includes a stint at Bazaar, Andrés’s restaurant in Los Angeles, as well as internships at El Bulli in Spain and Noma in Denmark—two of the most acclaimed restaurants in the world. A combination of the rigors of those kitchens, her training in science, and her naturally unflappable personality enabled Button to plow through the preparations with determination and focus, while at the same time keeping a running conversation with anyone who wandered through.

Those rounds of eggplant soaking in milk? “It’s berenjenas,” she said, “an appetizer traditional in the south of Spain.” The milk removes the eggplant’s bitterness and allows it to fry into astonishingly crunchy, creamy little disks, which Button lightly accented with wild mountain honey and rosemary needles.

Those unusual pale loaves of bread? “Pan de cristal from Spain,” she said. “It literally means ‘glass bread,’ and it’s unlike anything in the U.S.” Sliced and toasted, it proved to be a shatteringly crisp base for escalivada, a kind of crostini topped with an intense mix of roasted vegetables, anchovy, and blue cheese.

For her first course, esqueixada de montaña, Button used fresh trout from Sunburst Trout Farms, a fishery in the mountains outside of Asheville, in place of the salt cod usually used in this traditional Catalan salad. The thin fillets were plated artistically with a rough tomato puree, orange trout roe, and black olives. The Ibérico de Bellota pork, imported from Spain, received equally reverential treatment. The pigs are fed a diet of acorns, which imparts a deep, nutty flavor to the meat. For the fourth course—pluma en adobo—the pluma, or top tenderloin, was simply grilled, sliced, and served with a gently spiced adobo sauce and rich potato puree made with olive oil.

“What I try to do is find really great ingredients and treat them simply,” Button said. “I’m still finding my style after one and a half years. This is my first restaurant—my first chef position. But I feel myself gaining confidence.”

By 7 pm, the judges began to gather on a pillared terrace overlooking the estate’s grounds, and the young chef’s confidence was palpable from the moment the first canapés were passed. In addition to 2003 Dom Pérignon, cocktail hour featured Moonshine Margaritas, a sophisticated drink involving artisanal moonshine and “salt air” dispensed from a canister of liquid nitrogen—yet another nod to avant-garde Spain and the American South. The chief mixologist for the night was Button’s husband, Felix Meana, who is also the beverage director at Cúrate. Meana and Button met at Café Atlántico, Andrés’s restaurant in Washington, D.C., where Meana was a manager and Button a server. When Andrés arrived at the event, the mood in the kitchen was not unlike that of a family reunion.

Once guests were seated in an Art Deco–style room beside the pool, the dinner began, and course after course arrived and astonished. Ajo blanco—cold almond-garlic soup garnished with green grapes—is a Spanish classic, but beneath the rich white broth, Button’s version concealed frozen green-grape granizado, a liquid “grape” of Pedro Ximenez sherry (a technique Button learned making the famous liquid olives at El Bulli), and a mound of incredibly sweet crab (a trick she learned at Noma: “They cook and pick it right before they serve it, so the crab never needs refrigerating, and it makes a huge difference in the flavor”).

The beet salad was another deceptively familiar course. As with the soup, its flavors were built from the ground up: A puree of Marcona almonds was swirled on the bottom of the plate, followed by blanched beets set as vertically as possible to keep the salad airy. Pickled orange was scattered in between, along with segments of fresh orange and chopped Marcona almonds. Finally, a tangle of baby greens was tossed with blood-orange vinaigrette and shavings of tangy Roncal, an aged Spanish sheep’s-milk cheese. “It looked like any other beet salad,” said judge Izabella Dobrzycka. “And then you tasted it.”

The evening’s menu, filled with vivid flavors and surprises, revealed Button’s unique sensibility, which is as deeply Spanish as it is modern, comfortable, and American. Certainly this meal would have impressed diners in any city in the world; but on this autumn night, the guests were sophisticated gourmets armed with scorecards. As the last plates were cleared, an electric excitement filled the room, and when Button emerged from the kitchen, she received a standing ovation for a performance that would win her the title of Robb Report’s first New Culinary Master.