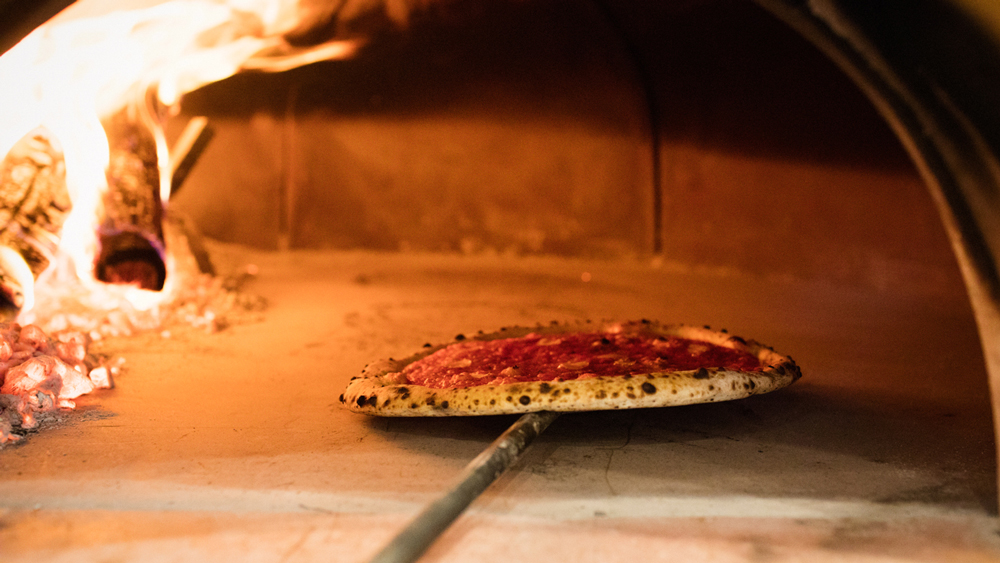 Carlo Mirarchi takes a brief pause from his lunch to start rifling through his phone. “You want to see something crazy?” asks the chef and co-founder of Roberta’s and Michelin two-starred Blanca in Brooklyn. When he turns the phone around there isn’t anything that wild—just a picture of the indelible Roberta’s sign. The scraggly red font had come to epitomize the DIY ethos of the restaurant that opened up in Bushwick back when it was the boonies. It also became associated with a Brooklyn aesthetic that engulfed not just the city, but the globe this past decade. Upon closer inspection though, something seems off with the image. The “s” is missing in Roberta’s.

“My friend sent me a picture of this place that opened in Santiago, Chile,” Mirarchi says with bemusement as he turns the phone back toward himself. He again considers the picture of a South American pizzeria named Roberta. A restaurant he doesn’t own, mind you. “Not only did they use the name, it’s like the same font—at least name it something else. That’s not the first one.” Carlo finds another photo to show off. “This is Dublin. Imitation is the sincerest form of flattery, right?”

And in the heart of Culver City is yet another restaurant that just opened bearing the Roberta’s name. However, this time around, it’s actually Mirarchi’s. With his business partner Brandon Hoy, they’ve brought their Brooklyn icon to LA to see if the duo—now a little older, wiser, and with more money—can turn Roberta’s into a hit again.

It wouldn’t quite be fair to say Roberta’s arose in an industrial wasteland of Brooklyn. The borough had actual industrial wastelands—the Gowanus Canal Superfund site, for one. However, no one was mistaking Bushwick for the Upper West Side in the mid-aughts.

Roberta’s began without Mirarchi in the picture. A couple musicians—Chris Parachini and Brandon Hoy—started building out a restaurant in a blighted block in Brooklyn. Running out of money, Mirarchi chipped in $30,000 to get the project over the finish line and said he wanted to be the chef. In 2008, Roberta’s was born.

Maybe not so much born, as cobbled together. “We didn’t have money. We didn’t have a designer,” Mirarchi says. “Basically, we went to a lumberyard and we got a good deal on stuff. We had this empty brick shithouse and filling it with wood made sense. It was a very simple choice. We can buy this product, or fabricate it ourselves and make it the way we prefer.”

It wasn’t just them. As the economy faltered in the lead-up and aftermath of the Financial Crisis, artisans across Brooklyn were making their own chocolate, canning pickles, opening old-timey butcher shops, and forging knives. The Brooklyn craft moment grew out of a rejection of mass-produced, factory-made products in favor of pre-industrial methods. “If we have the time and ability to make something better, or our idea of what better is, then we should do it,” says Mirarchi when describing the motivations of his fellow creators to prefer the handmade over cookie cutter.

At Roberta’s, they didn’t think they were making aesthetic choices that would eventually be emulated by wannabe hip restaurants. “The communal seating happened because we couldn’t afford chairs and we were worried about having that many tables. And I hate those Christmas lights. It ruins Christmas for me, and now we can’t take them down because everyone loves them,” he says with a laugh as he dismisses any romanticism for those early days. “When we first opened, everyone hated it. It was hot in the summer, freezing in the winter, and it was loud because it was so empty. But I think it grew on people. Empty, the space isn’t very nice, but when it’s filled with people, it feels homey.”

Unlike other chefs who’ve reached his Michelin two-starred heights, Mirarchi didn’t stage (work unpaid internships) in high-end kitchens across Europe to hone his craft. Inside Roberta’s he harnessed his obsessive streak to improve his own cooking. He found himself searching for and focusing on individual ingredients to build his dishes, much like the best of Italian cooking. That could mean aging his own meat at the restaurant, or even starting to grow his own produce. And from his cooks he encouraged creativity uncommon to the old-school French brigade kitchens they had worked in previously. The food and atmosphere had people from across the city willing to venture to a desolate stretch of Bushwick.

The Roberta’s team could sense their popularity was growing, even if they didn’t look up long enough to realize their place in the Brooklyn movement they’d become integral to. “Brandon and I were at the restaurant every single day for 14 hours a day, so we didn’t have a view of the larger thing that was happening,” Mirarchi says. Then the New York Times showed up. When the Gray Lady’s restaurant critic reviewed the place in 2011, he called it “one of the most extraordinary restaurants in America.” That’s when the team realized they’d tapped into something.

Mirarchi’s ambition grew. One night, the acclaimed chef behind Manresa, David Kinch, came in to eat. The two had become friends after meeting at an event, and Kinch just told Mirarchi to cook some stuff for him. Kinch enjoyed the meal enough that he told Manresa regulars that lived in New York to dine there, and Mirarchi started serving a tasting menu one night a week at one table. It gave the Roberta’s team the confidence to open a 12-seat tasting-menu-only chefs counter in an unused space inside their culinary compound. There Mirarchi could really flex his culinary muscle, and Michelin eventually awarded it two stars.

The restaurant’s ascendance wasn’t without its problems though. “Roberta’s in Brooklyn has a lot of structural issues,” Mirarchi says. “There’s nothing cool about the bathroom breaking at 9 PM on a Friday. That all comes from us figuring out how to be a plumber, not because we wanted to, believe me.” Those early days of chaos building Roberta’s had ramifications beyond the bones of the building.

In December 2016, Roberta’s reportedly settled a wage lawsuit for $317,500 after a former kitchen worker claimed he wasn’t paid overtime. Those legal troubles weren’t isolated. A messy fallout pitted Mirarchi and Hoy against Parachini, landing them in court and the New York tabloid press.

All the while, there were discussions occurring between Roberta’s and a member of the billionaire Tisch family to fund the restaurant’s expansion. That deal, which Mirarchi says was never as close as reported, didn’t come to pass. Roberta’s has remained self-funded. So if they decided to expand, Mirarchi and Hoy would determine when and where, and maintain control of their creative vision. Like many chefs and restaurateurs—from Stephanie Izard to Enrique Olvera to David Chang—they felt compelled to open an outpost in Los Angeles. It seemed natural that as with countless New Yorkers before them who’d moved to Los Angeles this decade, Roberta’s would settle down in a hipster enclave on the city’s east side. But it’s not Roberta’s M.O. to do things according to plan.

Plenty of natural wine at the bar.  Photo: courtesy Roberta's

In a carefully curated real estate development on LA’s Westside, sweaty-yet-stylish 30-somethings file out of a Soul Cycle. They walk past a Blue Bottle Coffee and a Van Leeuwen Ice Cream on the way to the valet to grab their awaiting cars. The Platform, located about a mile away from the Sony Pictures lot in Culver City, couldn’t be more different than Bushwick. But gritty Brooklyn has come to sunny LA and if those spin class goers so chose, they could dine at Roberta’s before heading to their cars.

Inside the airy and gleaming new Roberta’s, you’d be forgiven for not immediately knowing it was the sibling to the Brooklyn original. But look around and the signs are there. For instance, the locker of aging meat with a few ducks and some massive sides of beef greet you upon entering. The space itself still has a bit of an eclectic vibe, owing to Hoy’s design. The menu on close inspection shows the classic Bee Sting pizza—featuring tomato, soppressata, mozzarella with chili oil, honey and basil—has made the trek from the other coast. And Mirarchi’s love of natural wines is reflected in a stellar by-the-glass selection. But the California locale offers dishes you won’t get in Brooklyn, like heirloom tomatoes good enough to stay on the menu into the fall, and tongues of Santa Barbara sea urchin served with polenta.

Yes, the location feels a touch incongruous, but that was by design. “We don’t like to do the kind of moves that people would expect from us—we wanted to be in a different spot than people would have guessed,” Mirarchi says. “For us that’s more interesting. This place challenges us. It’s a different customer base than we’re used to, but what we’re doing is similar in a way. We’re still breaking in a new neighborhood in a way. It’s a very nice, semi-affluent area as opposed to Bushwick. But it’s still underserved as far as restaurants go.” Hoy and Mirarchi are packing people in again, but the different clientele is evidenced by the hefty stack of high chairs near the front door. “Someone asked me for a children’s menu the other day,” Mirarchi says, bemused.

The truth is, the duo has gotten older, and the restaurant reflects that. Perhaps the novelty has faded for dealing with a pizza cook being drunk on the job or a heavy downpour necessitating a trip to the lumberyard to buy materials to repair the place. And they haven’t ventured to LA just to repeat themselves by slapping up some reclaimed wood and Christmas lights and serving a good pie.

Besides, the Brooklyn that birthed Roberta’s has faded as well. For a restaurant like the original Roberta’s to succeed, it requires being close enough to a population center to gather an audience to sustain it. However, as real estate prices soar, upstarts like Mirarchi and Hoy wouldn’t have enough money to self-fund projects driven solely by their creativity. They require outside investors who will want more planning ahead of time. There’s much less time to learn on the job, like the Roberta’s team did. “More eyes are on you, and people know what you’re doing. You can’t get away with the kinds of things you were able to get away with 10 or 15 years ago, I don’t know where you’d do it. You’d have to go to Queens or The Bronx,” Mirarchi says. “I don’t even live in Brooklyn.”