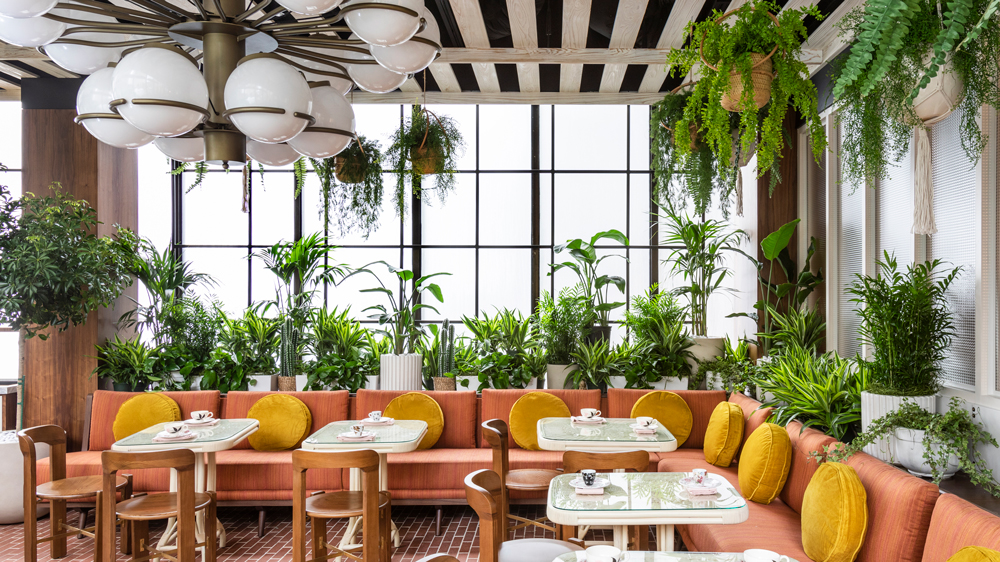 When kids venture into their grandparents’ basements, they usually find relics of centuries past: boxes of VHS tapes, broken humidifiers. But when chef Chris Cosentino was growing up, he found something completely different in his great-grandmother’s cellar: jar after jar of tomatoes. The entire basement of her three-story tenement in Rhode Island was filled with tomatoes, which the first-generation Italian immigrant canned herself.

Nonna Rosalie, a prolific home cook and pasta-cranker, inspired Cosentino’s entire career, and now he’s getting the chance to honor her by name and spirit with his newest restaurant, Rosalie Italian Soul. It opens next week in Houston.

“When Italians immigrated to the U.S., it was definitely difficult to acquire the same product that they had at home in Italy,” Cosentino said. “Hence, why Italian-American food was created. Ingenuity happened. So I’m taking a lot of the dishes that I grew up with and breathing in a little bit of new life. Tweaking and turning them a little bit here and there.”

The 145-seat seat restaurant is located in downtown’s C. Baldwin Hotel, which is named for Charlotte Baldwin Allen, the “Mother of Houston.” This is Cosentino and his business partner’s, Oliver Wharton, first foray into Texas. Cosentino also co-owns Cockscomb in San Francisco, Jackrabbit in Portland, Ore., and Acacia House in Napa Valley. He won season four of Bravo’s Top Chef Masters.

“[Houston chef] Chris Shepherd is a very good friend of mine, who I’ve known for many years, and he’s been constantly telling me, you gotta come down, you gotta come down,” Cosentino said. “It’s such a diverse city. Everybody here has been welcoming and open to share and it’s really set a great tone for the city. It feels right.”

The menu at Rosalie features traditional Italian-American dishes like multi-layered lasagna and fried arancini balls, and modern interpretations of red sauce favorites. Inspired by the diversity of the area, Cosentino is incorporating local ingredients into his family recipes. He’s adding jalapeños to spaghetti and clams, blue crab to manicotti, and he’s cooking Gulf shrimp Fra Diavolo-style in a wood-fired oven.

“The menu is very approachable, but at the same time you’re going to have that lightbulb go off and go, oh, I haven’t had it like that,” he said. “It’s really evolving those things that we knew and loved as kids and just pushing it just a little bit more. So for instance at lunch we’re doing a double-decker eggplant Parmesan sandwich. And then at night we’re doing an eggplant Parmesan, but it’s a full eggplant that’s been roasted, peeled and stuffed with all the cheeses and breaded.”

Executive chef Sasha Grumman comes to Rosalie from Austin’s Launderette. She worked under Cosentino at Cockscomb in San Francisco.

“I grew up in a Sicilian family as well, so I shared sort of the same stories that he had,” said Grumman, who threw a pasta-making party for her seventh birthday. “We’re playing on the nostalgic feeling of something like stuffed shells, things we grew up with, but we’re elevating the presentation and elevating the ingredients. There’s no gels, foams, etc. We’re not hiding behind anything. It’s all about execution here.”

One aspect of the menu that Cosentino is especially proud of is his baked pastas, which he says you don’t see much anymore because they are “finicky” and “have a big margin of error.” Grumman is excited about the “big stuff,” or shared plates, section of the menu. That includes a 32-ounce bistecca alla Fiorentina that’s been dry-aged for 28 days. And a massive, three-and-a-half-pound chicken Milanese.

“It’s a whole, de-boned chicken that’s pounded out and then breaded,” she said. “We throw that guy into the deep fryer, get it nice and golden and then we finish it with a nice, beautiful bright salad.”

Cosentino is also taking over the entire food program at the hotel, which includes breakfast. Expect Italian-inspired dishes such as polenta, eggs baked in tomato-based gravy, breakfast salads that include grapefruit and dates, and French toast made from focaccia bread pudding and topped with mascarpone and blueberries.

The 2,600-square-foot restaurant space is designed by Rohe Creative to resemble Cosentino’s great-grandmother’s 1970s-era kitchen. Banquettes are upholstered in denim and hand-sewn floral patches adorn the walls. There’s a family-style dining table, retro Italian glass chandeliers and walnut shelving stocked with records and boom boxes. The tomatoes, however, will be kept in the kitchen.