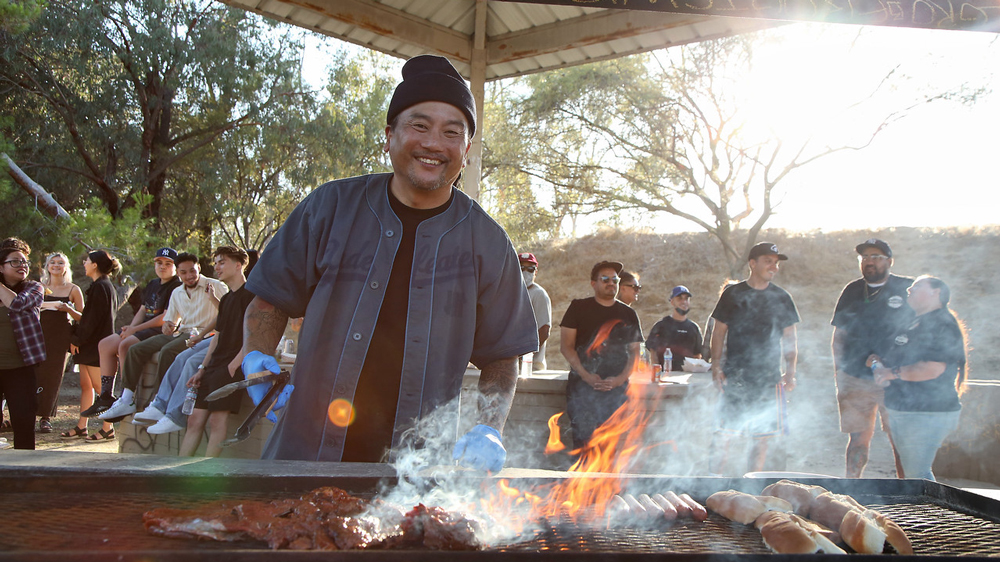 Chef Roy Choi isn’t a man who minces words, so he starts the second season of his Broken Bread television series by sharing a hard and essential truth: “The restaurant industry has always been a house of cards. The pandemic knocked them down.”

Broken Bread, which premieres on Tastemade and Southern California PBS station KCET on January 25, is about the intersection of food, culture, social justice and activism. So Choi, who tells Robb Report that he’s on “sabbatical” from opening new restaurants, uses the six-episode second season to explore the future of restaurants and why it’s crucial to support undocumented workers, independent farmers and street-food vendors.

Choi, who still runs the legendary Kogi food trucks in Los Angeles and the funky-chic play-the-greatest-hits Best Friend restaurant in Las Vegas, is constantly balancing idealism and realism. He says he’s been a hippie his entire life and would love to open a restaurant where everyone eats for free. Another dream of his is “to get to a place where everything about my life is regenerative, organic and clean.” But he understands “that’s also not realistic in the streets.” He knows that life is often about, depending on your point of view, nuances or contradictions.

On the second episode of Broken Bread this season, Choi talks to farm-to-table revolutionist Alice Waters about the importance of slow food.

“We were being told that time is money, more is better, everything should be fast, cheap and easy,” Waters tells Choi as she discusses the rise of frozen dinners in America and how these meals have been advertised. “When in fact, that’s not true. More isn’t better. And time isn’t money.”

This is a thought that many chefs who despise fast food, microwave meals and factory farming might applaud, but things aren’t exactly so simple for a lot of people. Finding time to cook can be challenging when you’re working and raising a family.

During our interview, Choi freely admits that he’s collaborated with “junk-food brands like Oreos or Spam or Cheetos.”

“I did those things in the past because those are things that I grew up with as an immigrant or in the neighborhoods that I grew up in, right?” Choi says. “And I tried to use these as Trojan horses to talk about other things.”

Choi has a new seasoning line, Hi Note, that has released a plant-based riff on cacio e pepe. He also just launched a Kogi Korean barbecue sauce that’s at Costco in Los Angeles. Obviously, these are products that help consumers speed up the process of making meals.

“Those are a link to get you to cook more,” Choi says of the mass-produced Kogi sauces. “The sauces are filled with aromatics and fruits and vegetables and soy sauce and nutrients, but it has some stabilizers to make it more accessible. That, for me, is a bridge to allow people to cook more. And then eventually, hopefully, I can get to a place like where Alice is at. So the Kogi sauce is the ability to get people to use one bottle but cook broccoli or cauliflower or eggplant. And then that leads them into something else, into exploring, maybe finding someone like Alice or going to their farmers market. So for me, it’s all about using my own experience to help others find their path toward better eating and better habits.”

Choi knows that he has the power to connect the streets and fine dining. He has the status where he’s respected by young taqueros and also by the pantheon of the world’s greatest chefs. He’s comfortable when he walks around South LA and is also in his element when he’s hanging out with celebrities and filming a Netflix show. But he’s still finding his own way as he connects all these dots.

On the first episode of Broken Bread this season, Choi visits two distinctly different food experiences: the Avenue 26 night market (a lively collection of street vendors that the city has since shut down) in Lincoln Heights and Wolfgang Puck’s Spago in Beverly Hills.

“I don’t discriminate,” Choi says when asked why he put Avenue 26 and Spago in the same episode. “A lot of our nature as humans is to just discriminate and separate and divide things: Spago, Avenue 26, one is higher than the other. But I don’t live within that same realm. To me, there is no high or low. There is no separation between that. So my fight and my goal every day is to continue to break down those walls and barriers and our perception toward, you know, what is considered valuable and what is considered not.”

Puck, for example, tells Choi that it ultimately comes down to supporting the hardworking people who grow and cook the food we eat.

“The back of the house starts with the fisherman, with the farmers,” Puck says. “If it’s an upscale restaurant and we have to charge a little more to get the best corn and the best strawberries, it’s OK, as long as it goes to the people who deserve it, who do all the work.”

Choi thanks Puck for his time. And then it’s time for Choi to check in with No Us With You, a nonprofit that feeds undocumented restaurant workers (including those employed by high-profile chefs like Suzanne Goin, who also appears on this episode of Broken Bread) and their families. Broken Bread is here to show you that the future of restaurants will be built by those willing to rethink the system and how people and food are valued.