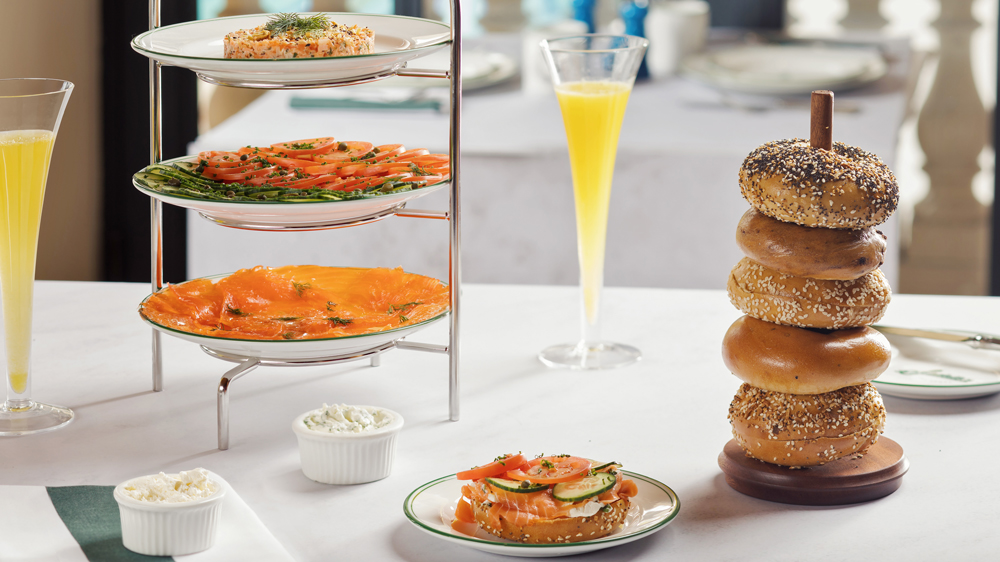 If the goal is to regroup after a rocky night out in Vegas, sometimes any eggs will do. There’s no shortage of places in Sin City that provide sustenance via a buffet brunch alongside bottomless mimosas made with some off-brand sparkling wine. That’s not enough for Major Food Group.

Chefs Mario Carbone and Rich Torrisi, and restaurateur Jeff Zalaznick have brought their New York restaurant Sadelle’s to the Strip. They’ve replaced the two-decade-old Café Bellagio and reimagined the space with a very distinct goal in mind. “We wanted to take the idea of an all-day café, which is a little stale and nondescript, give it life and some identity,” Carbone tells Robb Report.

As with many spots Major Food Group runs—like Carbone and the Grill—Sadelle’s is an ode to a time and place in New York City. The restaurant is their luxury interpretation of the appetizing shop, which Jewish immigrants opened across the city in the early 1900s, offering cold appetizers like smoked fish. Theirs, as is their wont, is a much grander version with a bakery and full-service restaurant.

When the team decided to open Sadelle’s in the Bellagio, they tweaked the formula a bit, making their new outpost a little less New York-centric. “For the Sadelle’s in Vegas we take our cue from the anchor restaurant you’d have in a grand European hotel,” Carbone says. “The backbone is tremendous attention to detail put forth to make everything from scratch every day. Every piece of bread, every pastry, bagels, sauces, salads, everything is made from scratch, the way it should be done.”

Right as you arrive you’ll come face to face with bakery cart displaying the house made sweets like chocolate babka and sticky buns to get you started. The breakfast menu also features caviar-topped eggs Benedict, towers of smoked fish with all the accoutrements, cheese blintzes, and of course there’s a roving Bloody Mary cart to mix something for you tableside.

The backbone of Major Food Group is also theatricality. The chefs aren’t just creating some food, they’re building a world. Working with designer Ken Fulk they built an extravagant dining room with rich emerald sofas in the lounge, coffered ceilings, wood tables, brass accents and more. The staff is outfitted in salmon colored tuxedo jackets with baby blue shirts and green ties. “It’s all the colors of Sadelle’s and I think it’s a fun and impressive throwback,” Carbone says. And there will be plenty of tableside service like chopped salads tossed under your watchful eye and whole lobsters deshelled right in front of you.

Of course, it won’t just be brunch. Sadelle’s will be open 18 hours a day, so Carbone and Torrisi will expand the on the New York City menu, adding dishes like rib eye covered in smothered onions and grilled branzino with meyer lemon. “We’re making sure we do a Sadelle’s approach to making dishes that you crave in an all-day restaurant.”