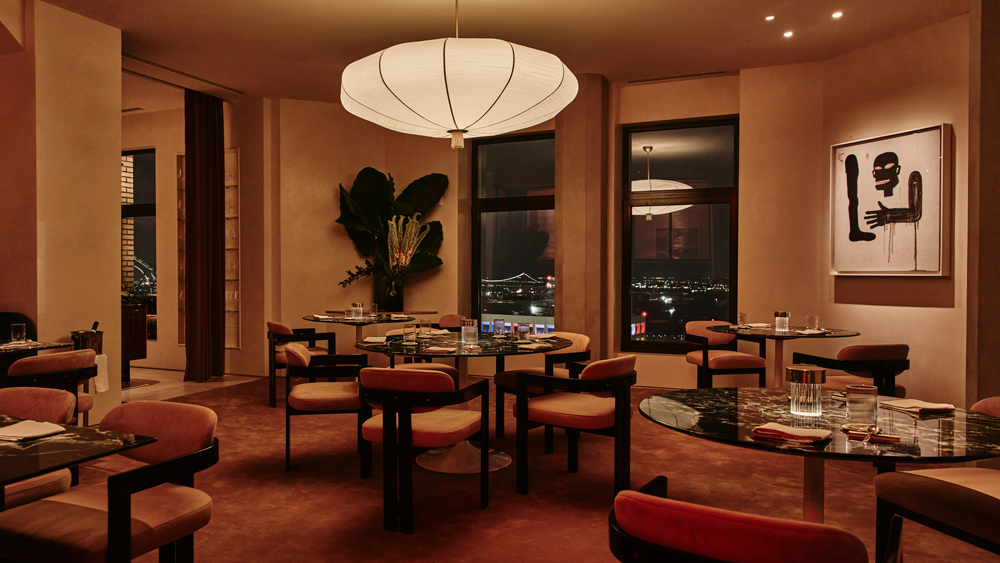 Martini or a Manhattan? Perhaps a Knickerbocker, a Vieux Carré or a nonalcoholic cocktail? This is the first of very few decisions you’ll have to make after being whisked up (and up) to Saga, James Kent and Jeff Katz’s new restaurant on the 63rd floor of 70 Pine Street in New York’s Financial District.

A bartender greets guests as soon as they exit the elevator, as if “you walked into a house for a fancy party,” says Harrison Ginsberg, bar director for the group, which includes Crown Shy downstairs and Overstory, a new cocktail bar on the 64th floor. “We want to ease the tension of fine dining.”

Those cocktails are built into the seven-course, $245 tasting experience that spans several hours and rooms in a space originally designed as an apartment for Henry Latham Doherty, the oil titan who founded what would become Citgo Petroleum. Latham Doherty never lived there, but the upper floors later served as closing rooms, offices and corporate dining rooms for AIG (the Saga team burned sage before opening).

While you can head straight to the dining room to enjoy your cocktail, don’t. One of two terraces is where you’ll want to sip a perfect, drinks-like-water Martini or brown butter-washed Manhattan while taking in stunning views of New York, pulsing with lights and life below. At its dramatic height, Saga feels both of the city and removed and its intimate, at-ease luxury is an emotional shot in the arm after a most difficult year.

Your cocktail awaits on the 63rd floor.  Photo: courtesy Saga

Saga was supposed to open in May 2020. Kent remembers sitting in a rental car last March, just outside 70 Pine. While he was looking out for parking enforcement officers, who were still doling out tickets in the city’s abandoned downtown, he watched a FedEx delivery truck unload boxes with beautiful Japanese writing, addressed to Saga. “We were so close,” he says.

Those boxes held plateware for the restaurant, one of many details—like the design from MN architecture and even some of the dishes—that were baked before work on the project stopped. The unexpected down time didn’t change Kent’s vision so much as fine tune it. “We were allowed to think further, finesse it more, refine what the food wants to be for the initial menu. For me, it’s an organic living thing,” he says.

With Saga, Kent and Katz are making a bet on the future of fine dining. There’s no dress code; neither a sequin tuxedo nor “dope t-shirt” would be out of place, says Kent, who favors Jordans with his chef whites. “We want people to feel comfortable. It’s a special room, and it’s one of these meals that you’re probably going to want to get dolled up for. But we don’t want it to be forced.”

The sumptuous green marble tables aren’t covered with linens. The playlist includes R&B classics, plus songs from H.E.R, Bobby Caldwell and Donald Byrd. Guests might find themselves running their hands back and forth over the soft-as-security-blanket velvet banquettes, and then there’s the plush peachy-pink carpet, an unexpected design choice that imbues the dining room with a sense of home (and helps with the acoustics).

“It’s not necessarily about the food. It’s about the way you feel,” says Kent, a native Manhattanite who spent his teen years tagging buildings and drinking beer in abandoned downtown streets.

Saga is a new kind of playground. For Kent, who cooked at Bouley and Eleven Madison Park and ran the Nomad before opening Crown Shy in 2019, it’s an opportunity to fully share his story. The name itself is, “an epic tale, the mission we’re on of running a restaurant, cooking, life in general,” he says. Plus, Saga is spelled with the initials of Katz’s and Kent’s children.

In what feels like a nod to Nomad’s seafood tower, Kent presents a study of fluke, inspired by childhood summers aboard a crowded family houseboat on Sag Harbour. They spent nights sleeping on tables and in tents on the top deck, and days fishing, crabbing, clamming and setting eel traps. “It’s where I learned the process of cooking and fabricating. We’d catch fluke and eat it on the way back with wasabi and soy sauce,” he says.

The course is presented on serviceware mimicking fluke bones, and each guest gets a bite of marinated fluke with crème fraîche and trout roe, kombu-cured fluke with shiso, citrus-cured fluke with honeydew, brûléed fluke rib with mushroom XO, escabeche fluke chop with jalapeño and fluke leche de tigre. (If you don’t opt for the $155 wine pairings, this is a good time to drink Champagne from wine director Kristen Goceljak’s list.)

Fine-dining is integral to Kent’s story, too. Warm, inviting and luxe, the caviar course (tamagoyaki-like omelette, brown butter crumble, bonito and royal sturgeon caviar) is the dish embodiment of the dining room. For a mid-meal bread course, synchronized servers present and open a wooden box to reveal laminated focaccia and trays with crème fraîche and summer herbs.

Before dinner, while guests are still sipping cocktails and contemplating how beautiful traffic looks 63 floors up, they’ll have to make two more choices. One is individual: lobster or halibut? The table must also reach consensus on beef or bird (on the night I visited it was duck, and on others squab or quail). Those are all the details you get until main course plates are dropped near the end of the meal. On any given night, the halibut may mingle with razor clams, truffles and corn nage; or an avocado, cucumber and tomatillo mole.

Kent’s father lived in North Africa and served his son Moroccan mint tea every time he visited. “That’s the way he greets us,” Kent says. At Saga, guests rise from their tables and take tea, refreshing and just sweet, in the solarium next to the kitchen. The server aerates the tea, pouring it in a stream at least two feet between vessels and eventually into traditional Moroccan glasses.

For the final savory course, Beeswax poached duck breast is presented simply with duck jus, a quartered fig, seared baby squash and a swipe of preserved Meyer lemon purée. The North African aesthetic reappears with shareable tagine of compressed duck leg, chickpeas and summer vegetables and herbs. The former is spare and subtle, the latter, a riot of flavor and texture that guests scoop up with msemen flatbread in messy bites.

Part of Kent’s vision of fine dining also centers his team, including Ameni, Ginsberg, Goceljak, culinary director Jassimran Singh and assistant general manager Gracie Estacio, who runs the dining room. He believes that it’s possible to pay and treat people well and to work as a collective, in fine dining. Much of Saga’s team has come up from Crown Shy and others from Del Posto, where Katz was managing partner. And together, they’re welcoming diners to a crown jewel space filled up with real human hospitality.

“I’m cooking food. I’m not saving the world or finding a vaccine for Covid. And the reason I started cooking was not to be a technician, not because I wanted to be the best chef. I love the idea of bringing people together,” says Kent. “We have lost all that in the last 16 months. To be able to sit at a table and laugh with friends, I wanted to bring that back to New York.”