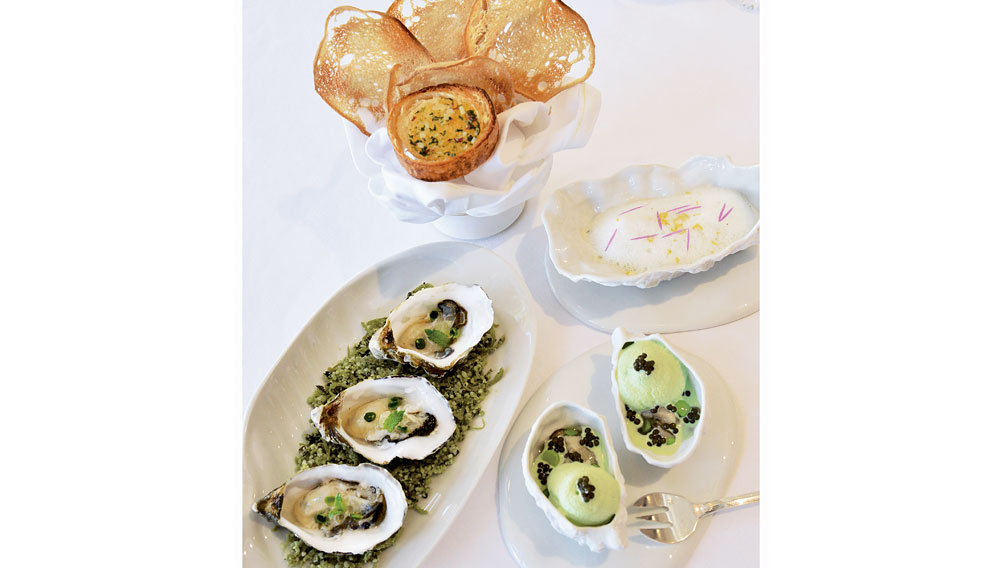 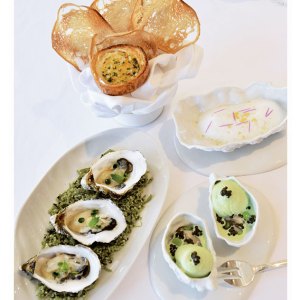 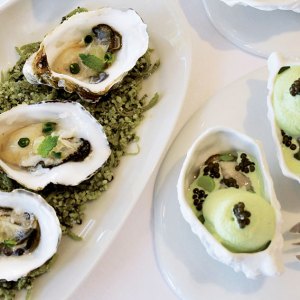 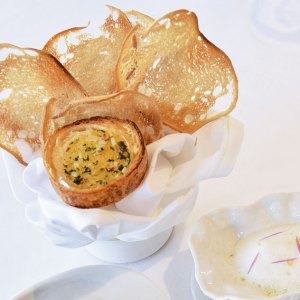 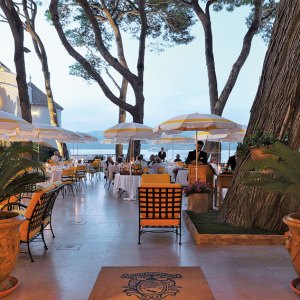 If one doubts that food has become high fashion in Saint-Tropez, one need only venture into the Christian Dior boutique, a three-story edifice on rue François Sibilli that more closely resembles one of the elegant villas for which the French Riviera is famous. The shop’s enclosed garden has been transformed into Dior des Lices, a small sanctuary of a restaurant operated by Yannick Alléno, the Michelin three-star chef who made his name at Le Meurice in Paris. Amid mature palm trees and blooming oleanders, a smattering of crisp white umbrellas and café tables offers a quiet refuge for simple luxuries—perhaps a fresh blue-lobster salad or Choc’Alléno, an irresistible version of pain au chocolat made with chocolate pastry—all elegantly served on delicate Dior bone china.

Of course, Saint-Tropez has always had plenty of restaurants, from late-night snack shacks to perennial favorites like La Ponche; but last season, bon vivants took note when a certain gastronomic tipping point was reached: Along with Alléno, Alain Ducasse, Georges Blanc, and Bruno Doucet opened new restaurants, and the 2013 Michelin Guide dished out only one new three-star rating in France—to chef Arnaud Donckele of Saint-Tropez’s La Vague d’Or. As high-toned as this new culinary wave may be, the restaurants are still open only in season (roughly April until October), and unlike nearby Monaco, where strict jacket-and-tie policies still prevail, the atmosphere in Saint-Tropez remains as unbuttoned as the men’s collars. “Tap shorts are not allowed for men,” La Vague d’Or’s website states, perhaps seriously.

“Our guests return over and over for the spirit of the place,” says Olivier Raveyre, director of the Résidence de la Pinède hotel, where La Vague d’Or is located. “It’s important to us that they spend a relaxed and comfortable moment here.” At the restaurant, a terrace that curls around parasol pines serves as the dining room, while the lapping waves and chirping cicadas join in a rendition of the South of France’s preferred summertime melody. Donckele offers a five-course prix fixe menu starting at $370 per person. It might include amberjack and crabmeat marinated in local mandarin-orange juice, and thyme sherbet and fennel sorbet served with absinthe.

Ducasse’s latest restaurant, Rivea, opened last season in the space that had been Spoon, his restaurant in the Hotel Byblos. Rivea’s loosened-up menu favors seasonal seafood and produce, including hors d’oeuvres (an assortment of five is $44), rock-octopus salad, vitello tonnato, and other Provençal specialties. The dining room—designed by Antonio Citterio and Patricia Viel, the duo behind the Bulgari Hotel in London—is an inviting terrace shaded by leafy plane trees and furnished with teak tables and colorful cushions reminiscent of those found on the yachts in the nearby port. “Alain and I figured out that our clients, who return again and again, to the point of feeling like friends, want authenticity but still expect the twist of a grand chef’s signature,” says Antoine Chevanne, owner and CEO of Groupe Floirat, the parent company of the hotel.

Tucked into a residential neighborhood, the Hotel Benkirai is home to La Régalade, the first of Doucet’s acclaimed restaurants of the same name outside of Paris. The dining area occupies a sundeck near the hotel pool and offers a three-course, $65 menu of summery Mediterranean fare. Over at the recently refreshed Hôtel de Paris, a new restaurant from Georges Blanc—Le Suffren Café by Georges—boasts menus concocted by the Michelin three-star chef. The indoor-outdoor space relies on retro patterns and lemon-yellow accents to create a low-key effect that recalls the Brigitte Bardot years—when the hotel was the place to linger. The menu highlights fresh seafood, such as tuna and octopus with coriander, but not to the exclusion of dishes like venison with foie gras. A cocktail menu and wine list pleases night owls with magnums of Saint-Tropez’s favorite party potions—Dom Pérignon and Cristal—and a selection of inventive drinks, such as the Pampelonne Beach, a blend of gin, Martini Bianco, mango-orange liqueur, and grapefruit named for Saint-Tropez’s most famous stretch of sand.