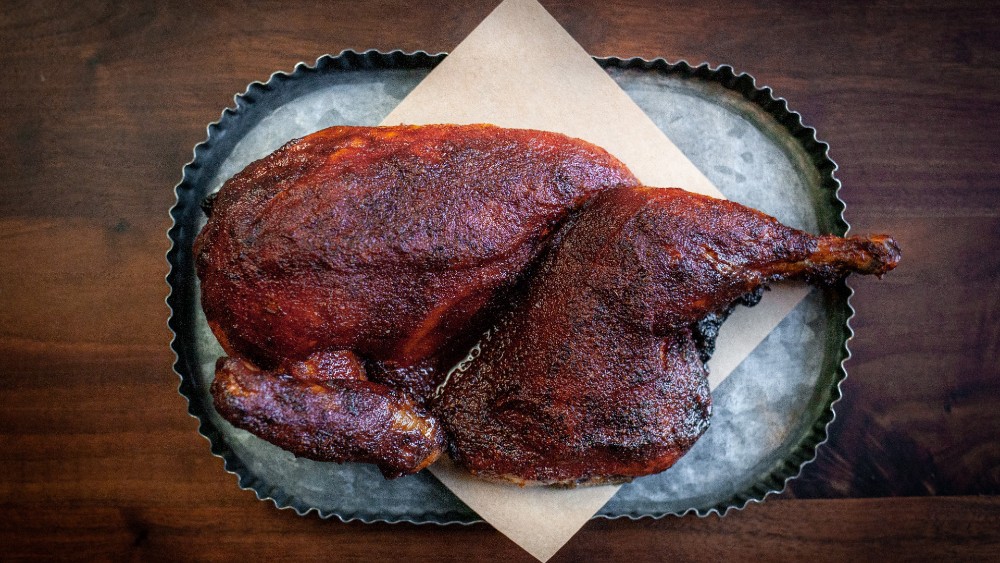 One dining experience in 2019 that stood out above the rest had to have been my night at Michelin two-star Saison in San Francisco. Every course was outstanding from the uni on “liquid toast” to the black cod with fermented walnut. The restaurant that chef Joshua Skenes had originally opened was under the control of Laurent Gras at the time, mixing his own sensibility with the Saison’s trademark wood-fired cooking and naturalism. Gras has since left and on March 17 the pandemic shut the restaurant down, but in the last couple weeks it has reemerged. You won’t find delicate tasting menu fare, however. The restaurant is now serving barbecue.

The team from Saison has joined forces with its cousin, the Skenes-founded, seafood-focused Angler to put Michelin-starred Angler’s massive wood-fired hearth to good use, by creating Saison Smokehouse. They’re serving chickens smoked in the wood oven ($20 for half a bird and $40 for a whole), pastrami brisket ($10 per 1/4 pound), pork ribs ($26 for a half rack), pastrami on rye ($14) and an array of sides including buttermilk biscuits, potato salad, barbecue Rancho Gordo beans and more.

Saison Smokehouse, like a lot of Michelin-starred restaurants transitioning to takeout, is offering family-style meal combos on Tock. A package for two comes with the choice of two meats, biscuits with honey butter and pickles, a choice of side, a choice of barbecue sauce and a pair of embered caramel frostys for dessert, all for $72.

The menu was developed and is being executed as a joint effort between the two restaurants’ teams: Richard Lee and Joshua Plunkett from Saison and Jacob Ruck and Monique Moufarrej of Angler. They’re joined by Paul Chung, the culinary director for Saison Hospitality (which oversees the restaurants in San Francisco and LA).

The restaurant is open Tuesdays through Saturday and so far business has been pretty brisk, with this Saturday’s meals selling out entirely. Each Monday at 8 am you’ll have another chance to snag one of the meals during the week.